Some commands or operations take time to execute and until execution they do not show any results. Such a situation can create a thinking point in the user’s head that either the command is functioning or hung up. To overcome this problem, a progress bar can be used to get the status of the ongoing command.

How PowerShell Progress bar can be obtained

The above syntax is dependent on the parametric support and the parameters supported by Write-Progress commands are defined as follows:

How to get PowerShell Progress bar

The PowerShell progress bar functions on the grounds supported by Write-Progress. This section provides examples that provide usage of Write-Progress.

Example 1 : Progress bar with foreach loop
Let’s say we want to get the progress bar on the Show-Process cmdlet. For that, we are creating a PowerShell script where we will write several commands that would help in doing so.

For scripting mode, open the PowerShell ISE as an administrator by searching it from the search bar of Windows: 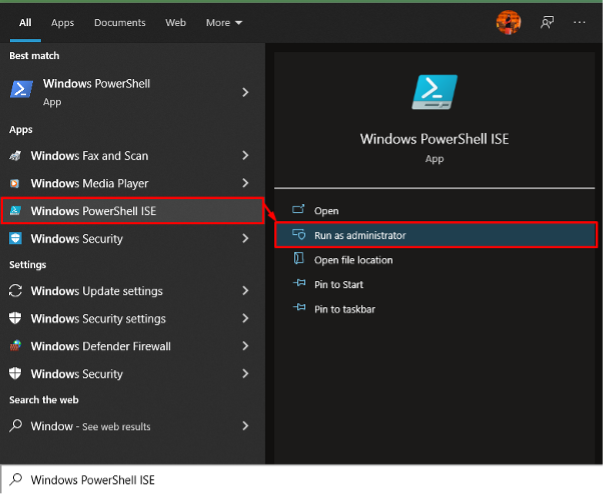 We have created a progress bar that shows the process that has a Handles value greater than or equal to 1000.

The script is named progress.ps1 and contains the following lines:

The first line filters the processes that have Handles greater than or equal to 1000 and the value is stored in a variable named $proc.

To run the script, open PowerShell and navigate to the directory where your script is saved. We have executed the progress.ps1 script placed in the C:\scripts directory and the output is shown below.

Example 2: Getting the progress bar using For loop
In this example. For loop is taken as a demonstrative pick to show the progress. For assistance, the script for.ps1 is used that contains the execution of for loop with Write-Progress cmdlet:

For the execution of a script, navigate your terminal to the location where the script is saved. We have executed the for.ps1 as seen in the image below:

Example 3: Get progress bar using While loops
In this example, the While loop is used here to get the progress bar in PowerShell. A new PowerShell script is created with a name while.ps1 that contains the following lines of code with the description provided below:

After executing the script, you would observe the progress bar as shown in the image below: