Let’s have a look at all the files and folders located in the main home directory of a Ubuntu 20.04 system. So, we will be using the Get-ChildItem command to get those folders or files in later examples. To list the files and folder, try the simple keyword “ls” as shown below. 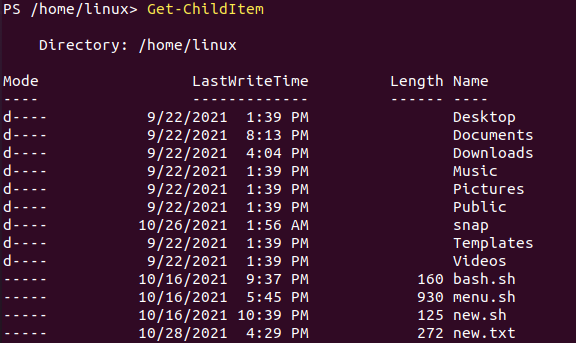 Let’s take the Get-ChildItem command on the shell in a different way. In the above illustration, we have all the information regarding the child items of a home directory and their names. Within this example, we will be using the parameter “Name” only to get the names of child files and folders of the Home directory. So, the command results in the names of the child files and folders on the shell while using the parameter “Name”. 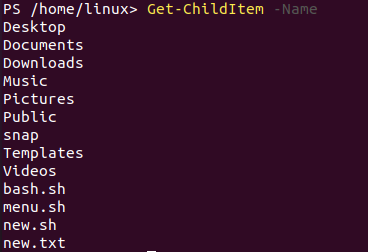 Let’s make the use of the “Get-ChildItem” command a little more specific. So, we have been using this command to only get the child items from the home directory, which contains the “txt” extension at their end. We have used “*.txt” as a parametric value. In return, we have got only 1 record for a text file, and its additional information is shown below.

Let’s use the same query for child items containing the “sh” extension at their end. As a result, we have got 3 bash files and their information on the shell.

Let’s check for the child items within another folder of the Ubuntu 20.04 system. So, we have to mention the path to that particular folder to get its contents, i.e., files and folders as children. Thus, we mentioned the path within the Gtr-ChildItem command to get into the Documents folder of our Linux system. The Path parameter has been used here to specify the location path. After the execution of this command, we have got two records as the child items of a Document folder, i.e., text files on the screen shown below.

You can also use the Name parameter after the path parameter to get the names of child items instead of their whole information as below. 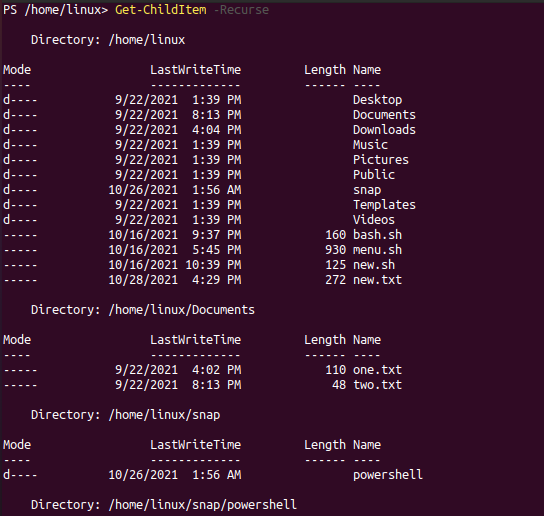 The snap folder contains another folder, “PowerShell” as its child folder.

The sub-files and folder for the child folders, i.e., PowerShell, and Downloads have been displayed as well.

You can see all the child sub-files and folders of a “tmp” folder from the image below. The “tmp” folder is most used in system configurations, so a long list has been displayed. 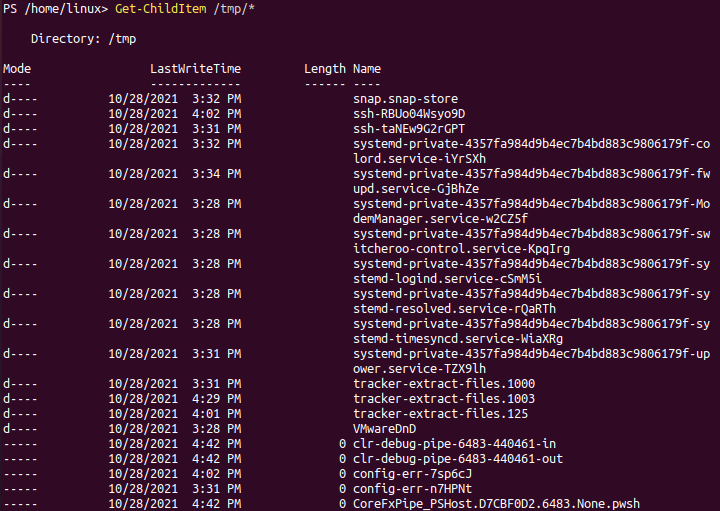 Let’s make use of another parameter in the Get-ChildItem cmdlet in the PowerShell named “Exclude”. This parameter has been known for ignoring or excluding the files or folders having their name started with some particular character or string of characters.  So, we have used the Exclude parameter here in the Get-ChildItem command to exclude all the files or directories having their name started with the character “D”. 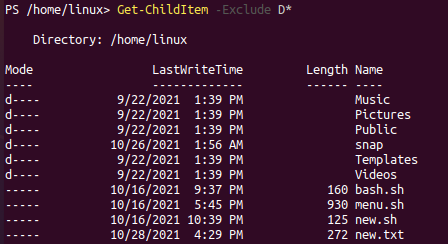 Let’s have a look at another way to use the Get-ChildItem command in the PowerShell of the Ubuntu 20.04 system. So, we will be making use of variables this time. Here, we have used the Get-ChildItem command to fetch all the child items of the home folder ending with “txt” extensions. The result would be saved to the variable “v”. After this, we have used the “Format-Wide” cmdlet to show the contents of this variable in a different format on our PowerShell screen. The InputObject parameter takes the variable as an argument. As a result, only a single record has been displayed on the PowerShell screen.

The same goes for the parameter Path that is used in the Get-ChildItem command as below.

This article explains very simple examples for using the Get-ChildItem cmdlet within the PowerShell of the Ubuntu 20.04 Linux system. We have used different parameters, i.e., exclude, Recurse, name, and path, to make it more understandable. This was all about Get-ChildItem in the PowerShell. We hope you will like it.