The “CASE” expression consists of two forms which are:

Both forms define a conditional expression in a query which we will look into in further examples in this article.

The first form of the “CASE” statement basic syntax is mentioned below:

To run queries and to include conditional expressions in your statement we first have to create a sample table to put “CASE” conditions on it in PostgreSQL. I have generated a table as an example: 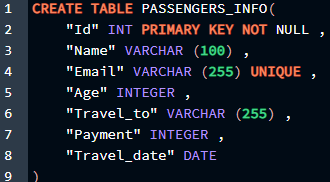 After inserting some values in the above table, the table looks like this:

Now, when the table is created, let’s dive into some examples for simple PostgreSQL “CASE” expressions below:

In the table created above, “passengers_info”, we will use the simple “CASE” expressions in the statements. In the below example, I have used the “CASE” expression to include in what age era the passengers are in; for example, a person whom age is ‘22’ is displayed as ‘in twenties’ age and so on. Below is the demonstration of this example: 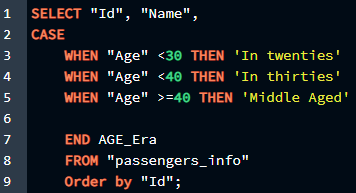 In the above statement,

The above statement gives the following output on the screen: 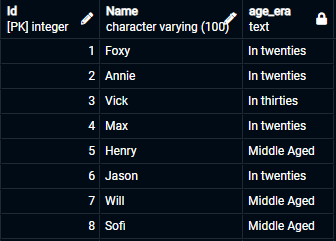 As we can see, the passengers in their twenties, thirties, or middle-aged era are displayed respectively with their Ids and name column, and the column name we included in the “END” clause is also visible.

We can use aggregate functions like COUNT, SUM, AVG, MIN, MAX etc. functions in our statements too within “CASE” expressions. In the below example, we will be seeing how you can use “SUM” function in “CASE” condition statements: 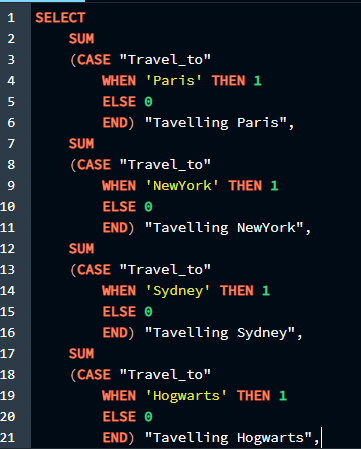 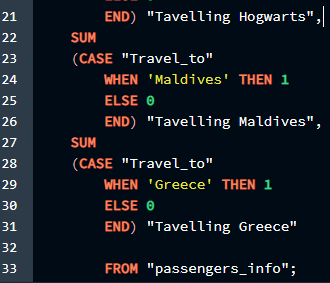 The above syntax uses the “SUM” function to calculate how many passengers travel to a specific city. The output for the following syntax is attached below:

This output result shows the number of passengers traveling to which city.

The following syntax shows the basic statement to write general or searched “CASE” expressions in PostgreSQL:

In this example we will divide and calculate the passengers travelling into two classes i.e. economy and business class using “SUM” function: 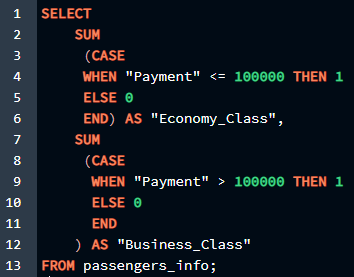 In the above statement, we have used the condition that passengers with a payment of less than 1 lac travel to economy class and greater than 1 lac will travel to business class. The output is displayed as: