Spawn is a function used in POSIX to load and execute child processes. The currently running process in POSIX will then either continue or not continue to execute these child processes and other processes asynchronously. Whenever a new sub-process is created, it requires some specific memory that will allow the parent and child process to execute. In Microsoft Windows, UNIX, and Linux, there is a certain family of spawns; and other families of spawn functions are considered an optional extension.

Why Use POSIX Spawn?

The posix_spawn() and posix_spawnp() functions are both used to create a new child process. The child process then executes a file. These functions were specified by POSIX to standardize the method of creating new processes for machines that do not have fork system call support. These machines are usually small and lack the embedded systems for lMMU support.

The two functions combine fork and exec, with some additional steps that will execute the child. They act as a subset of functionalities, usually achieved with a fork, for all the system calls and embedded systems that lack such functionality.

In this example, we will use the spawn () function to create and execute a new child process. Then, we will explain all the relevant arguments used in the function.

The arguments used in the example are as follows:

In the following example, a new child process is created to run the command by /bin/sh -c. This is the value passed as the first argument. The test.c code is as follows: 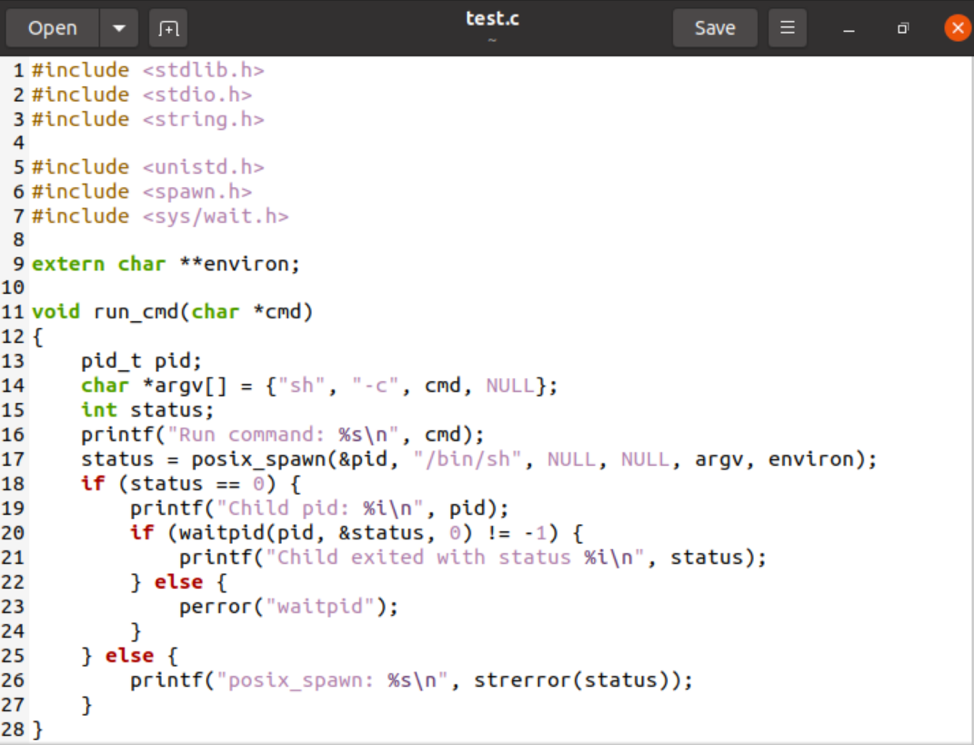 In the above example, we called the libraries, then called the spawn.h header. You will also see the posix_spawn() called to create a child process in the above example. The spawn and spawnp functions are used in place of the fork and exec functions. Spawn() has flexibility and provides a lot of ease to the users in many ways. It is a bit dissimilar from system() and exec(). It will return and create the fresh child process. In our example, it is pid. Above, you can see that the wait function waitpid(), then system() is used. Notice that the spawn() and fork() calling processes are the same, and the method of implementation is more or less the same for both functions.

We will now execute the example using a gcc compiler. You can also use any other compiler of your choice:

Next, run the following:

The output of the above command will look as follows:

The child pid will be created, as you can see in the above output.

Libc: Use the -l c to link the gcc compiler. Here, notice that this library is included automatically.

The spawn() function is based on POSIX 1003.1d draft standard used as posix_spawn(). The C library includes spawn*() functions. Here, we will list a few suffixes, along with their descriptions:

e: used as an array for environment variables.

l: used as a NULL-terminated list of the arguments used inside the program.

p: used to define a relative path. If the path does not have a slash in its value, then the system uses and searches the PATH environment variable for any similar program.

v: acts as a vector of arguments inside the program.

In spawn(), we practice the fd_count and fd_map arguments to call out the file descriptors. It specifies which child to inherit.

The number used as a file descriptor for the child process depends on its location inside the fd_map. Here, we will consider the example of the parent with file descriptors valued 1, 3, and 5, then the mapping will be something like this:

Note that if you are using the explicit fd_map to match these file descriptors with the child and parent, then you must map the SPWAN_FDCLOSE function to proceed.

In Spawn, users need to call out any of the following flags in case of inheritance. Some examples of Spawn flags and their descriptions are given below:

The <spawn.h> defines that mask SPAWN_ALIGN_MASK used to align the flags listed above.

The posix_spawn() and posix_spawnp() functions can also fail in some cases, such as the following:

EINVAL: This is the case when the value identified by file_actions or attrp is not correct and adequate.

When the underlying fork (2), fork (2), or clone (2) call fails, the spawn() functions will return an error number.

ENOSYS: This is the case if the function and its support is not included or provided within a system.

This tutorial covered the basic functionalities provided by POSIX_spawn() and the functions used by it to execute and perform its functions. We also covered the flags and errors commonly used by Spawn.