Using shm_open(), form a shared memory object. The document descriptor can be reverted if the formation of the object is successful.

With ftruncate(), the size of the object will be fixed.

With map() and MAP_SHARED, delineate this object into the present address space.

Use close() to shut the object.

Through shm_unlink(), delete the object in the shared memory.

As described above, shm_open() is used to generate a new shared memory object. It makes the object accessible to the calling procedure using the reverted descriptor. The following is the definition of this function call:

The first parameter is the shared memory object’s name. It is a null-terminated string of the /name type, with the stipulation that no other character can be a slash other than its first character. Oflag is a small veil created with several of the preceding flags by OR-ing, whether via O_RDONLY or O_RDWR. The parameters described indicate that its shared-memory object must be formed (O_CREAT) when it does not already exist and also the object is available for reading and writing (O_RDWR). The very last argument sets the directory approvals for the shared-memory object.

Shm_unlink() eliminates the POSIX shared memory entity that was formerly developed. The integer document descriptor for the shared-memory object is returned via an effective call to shm_open(). As defined beneath the shm_open(), the parameter name is the title of the shared memory entity. The following is the definition of the shm_unlink() function:

Upon setting the object, the ftruncate() method is cast off to set up the entity size in bytes. The function definition is as follows:

When constructing a shared POSIX memory, it is indeed zero bytes in size capacity. You may render the POSIX shared memory entity with bytes of size length via ftruncate. Ftruncate yields zero on execution. Ftruncate outputs -1 in case of a failure and errno is set to trigger the error.

At the position directed by addr and getting size, length, munmap unmaps the shared memory item. Munmap yields 0 upon completion and -1 in the situation of inaccuracy, in which case errno is assigned to trigger the error.

Let us take the example of the sender and the receiver. The sender will create a new shared-memory object with the name /shmem-example and inscribe three numerals into the shared memory through it. Now, the receiver may expose the shared-memory object and recite the three numerals from the memory. We will create three files with the names protocol.h, sender.c, and receiver.c.

Next, we will add the below source code to the files ‘protocol.h,’ ‘sender.c,’ and ‘receiver.c.’ Now, we will save all and close them. 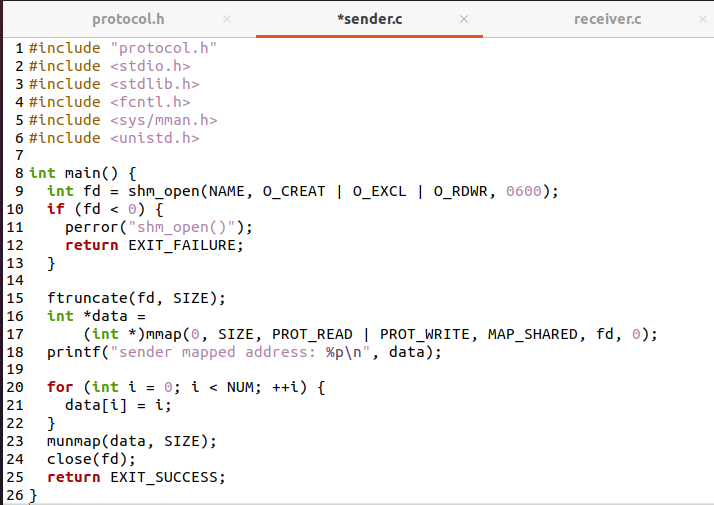 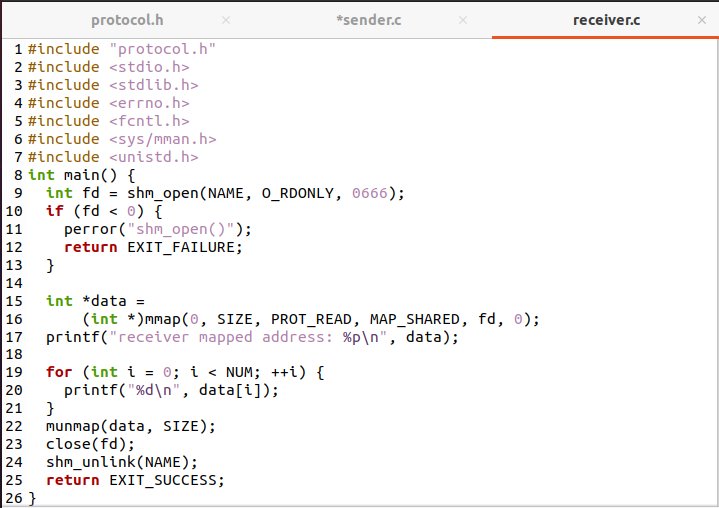 Now we will be compiling and joining the above code using the keyword –lrt separately for the sender.c and receiver.c file. Here is the command to do so:

Now, we will run the sender code using the following command. The output is given below.

Running the sender code, the shared memory object has been generated and can be found beneath /dev/shm using the command below:

When we run the receiver code, we will obtain the output below:

Whenever the function gm_unlink() is called using the file ‘receiver.c,’ the object /dev/shm/shmem-example will be detached. In this case, you will obtain no object on output, as shown below.

In this article, you learned how to use POSIX Shared Memory with C programming in Ubuntu 20.04, including every function call used to establish shared memory. I hope that this article helped you to improve your programming knowledge and covered every doubt you have on this subject.