In this write-up, we will demonstrate the procedure of using the poll bot on Discord. If you want to create a poll with the Discord WebHook, then move to the last section of this post.

How to set up poll bot on Discord 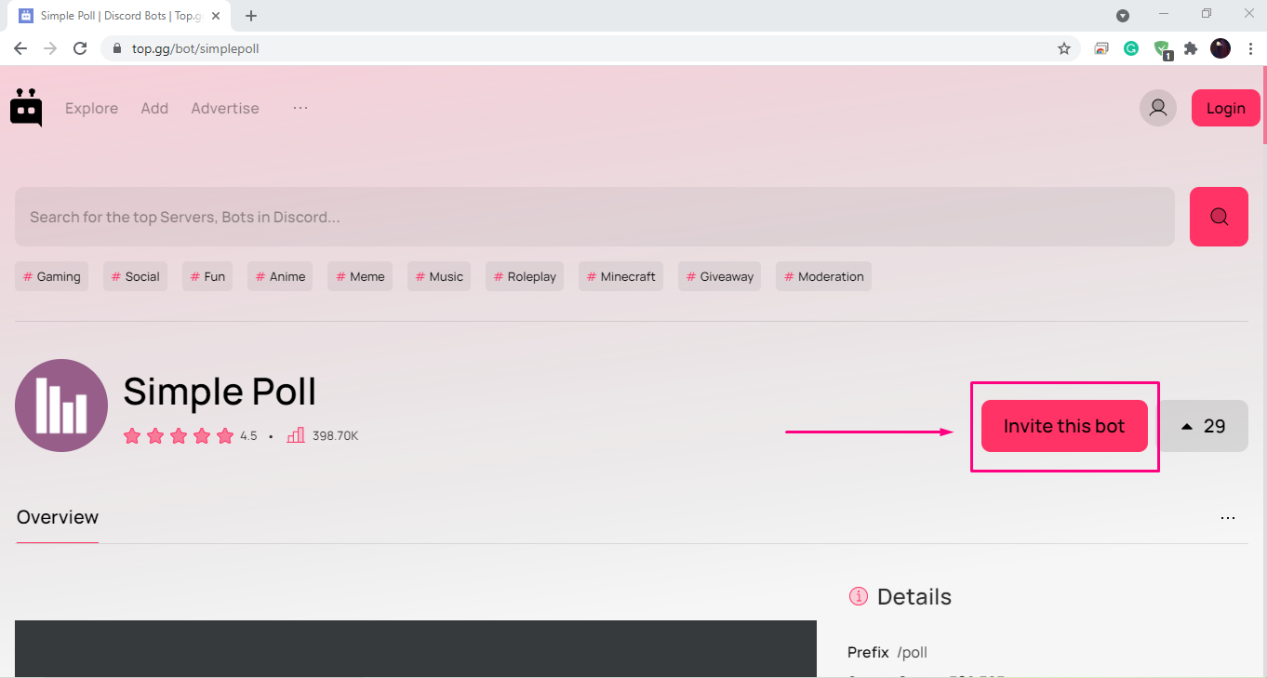 Now select your Discord server for which you are going to set up the Simple Poll bot and click on the “Continue” button: 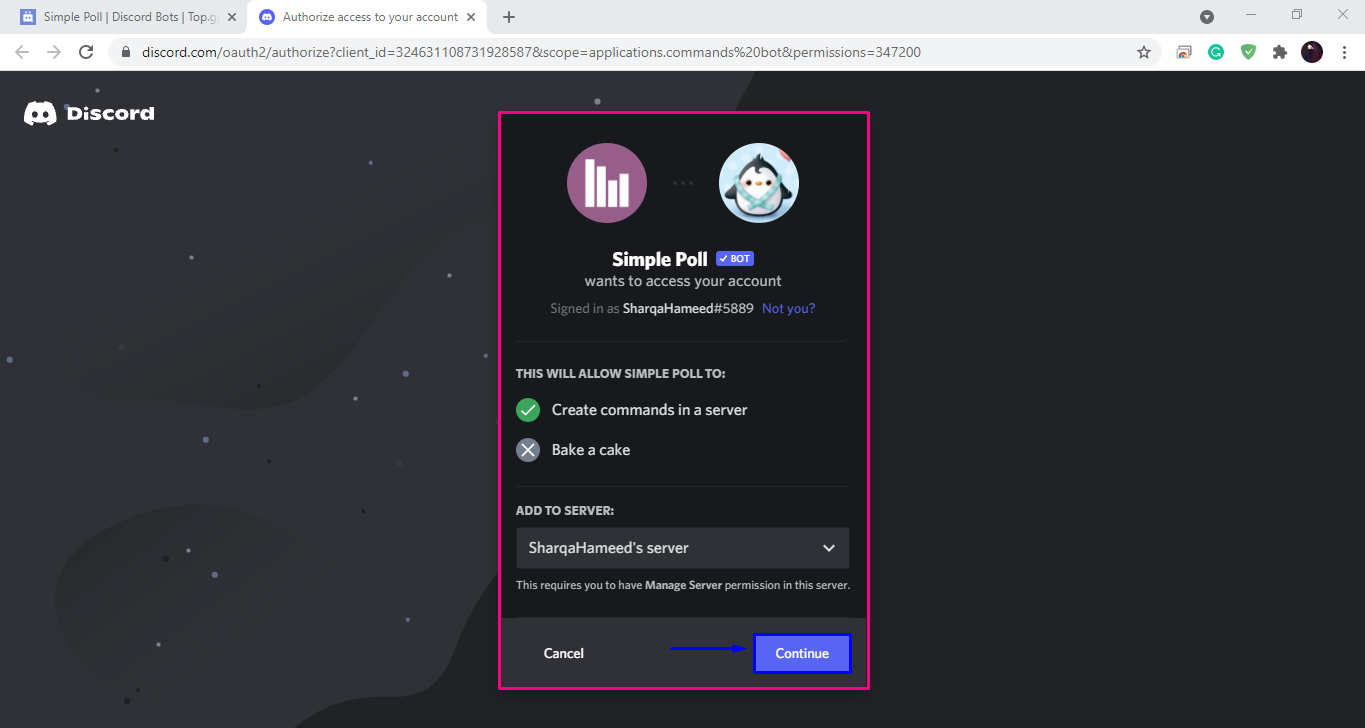 In the next window, you can checkout the permissions set of the Simple poll bot for your server. After settings its permissions for your Discord server, we will click on the “Authorize” button: 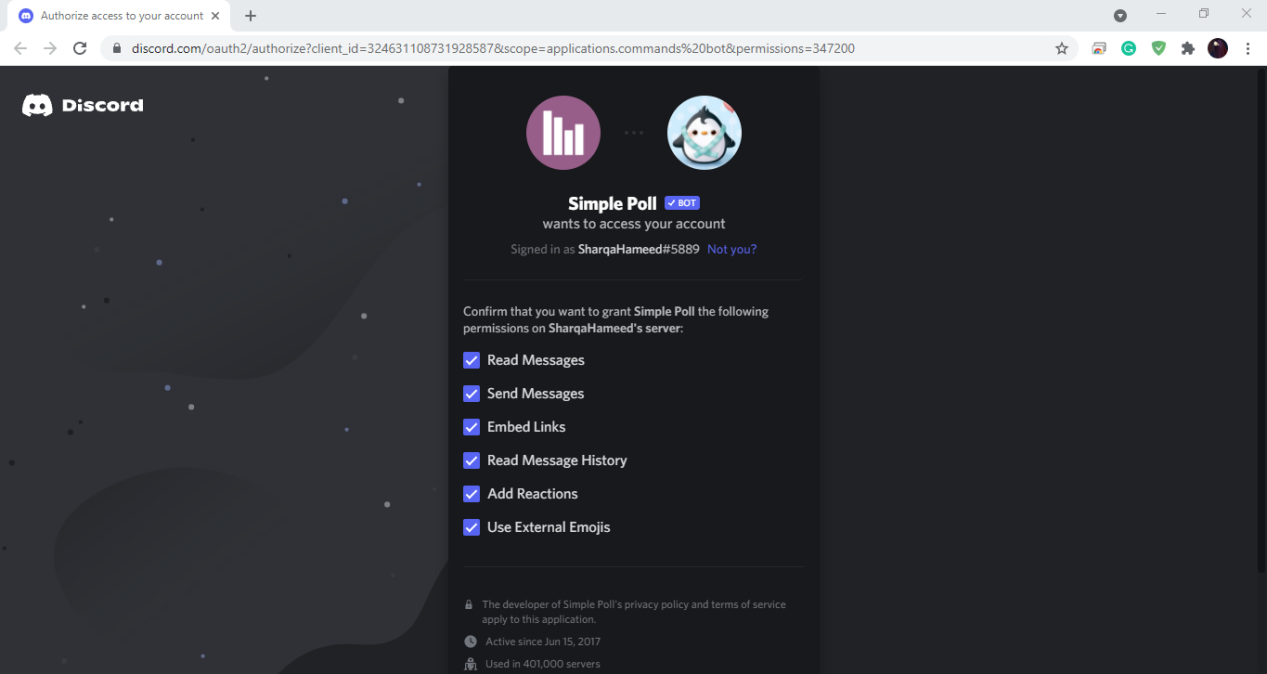 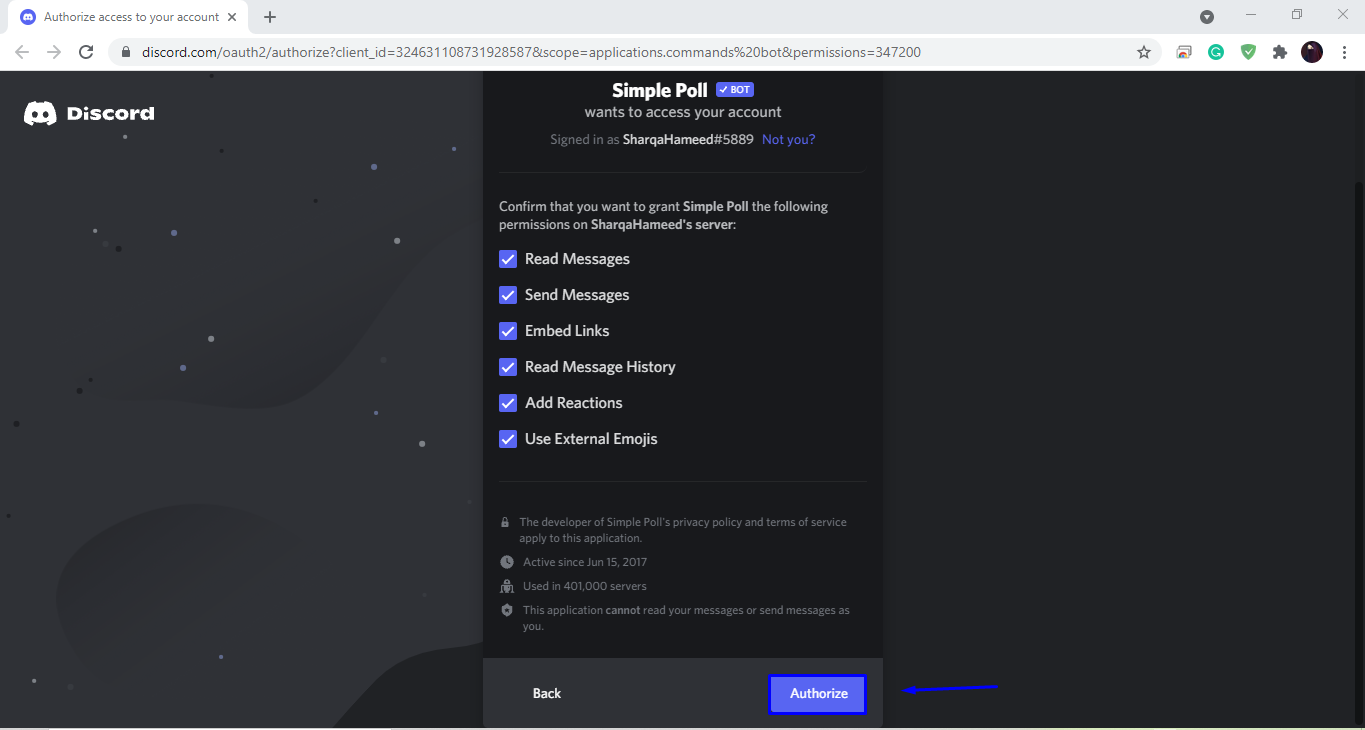 The following message declares that you have completed all of the previously given steps and your poll bot is all ready to use: 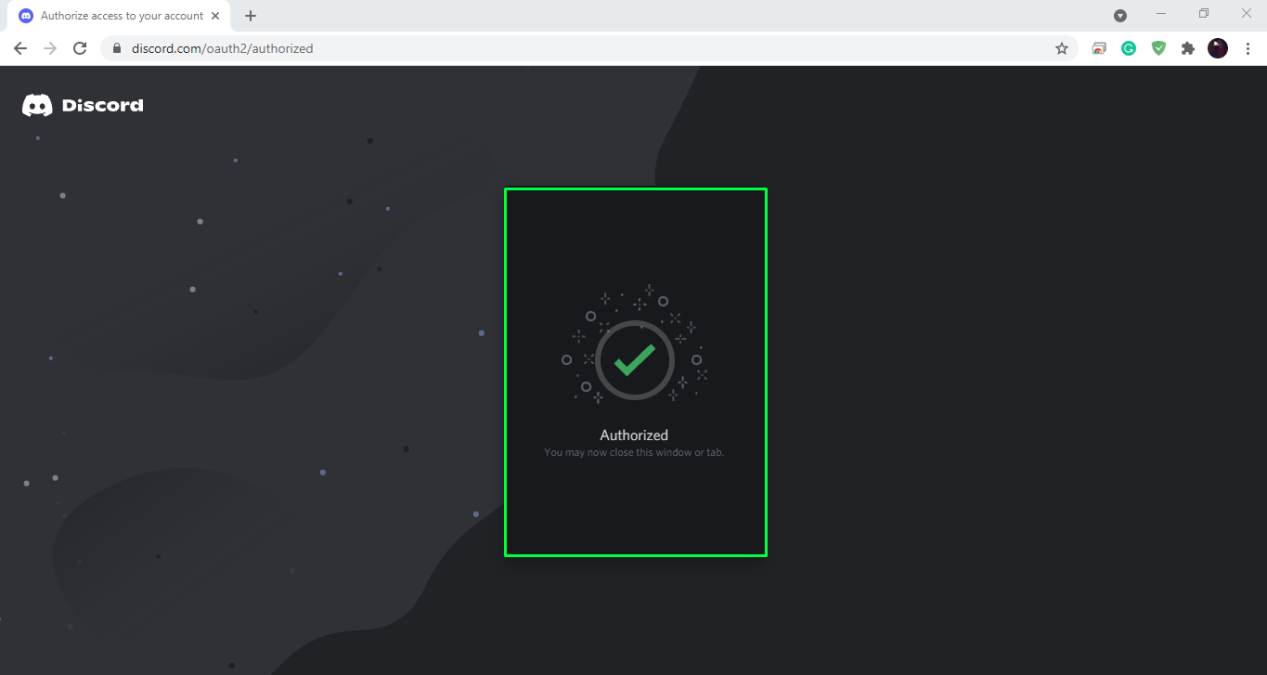 How to use poll bot for creating a poll on Discord

After setting up the poll bot on our Discord server, it is time to show you how we can use it for making different types of polls on Discord: 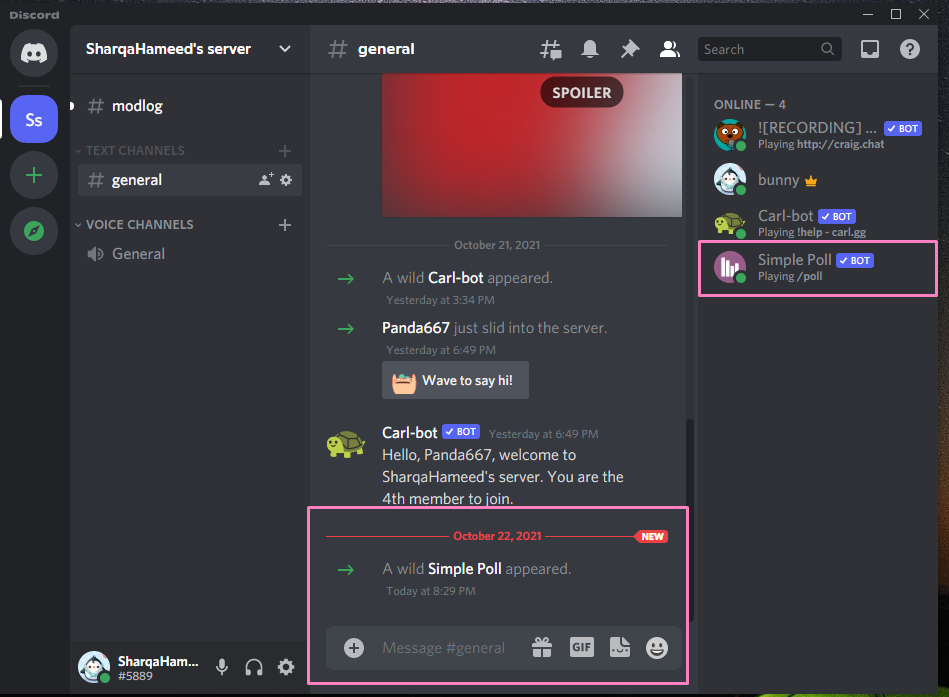 To use the poll bot on Discord, the command that you can utilize is “/poll“:

After entering your question for the poll, press “TAB”, then you will get a list of options for your poll. These options will be considered as “choices” for the asked question. Now, to add an option for our poll, we will click on the “choice_a” and write out “Panda” as the first option: 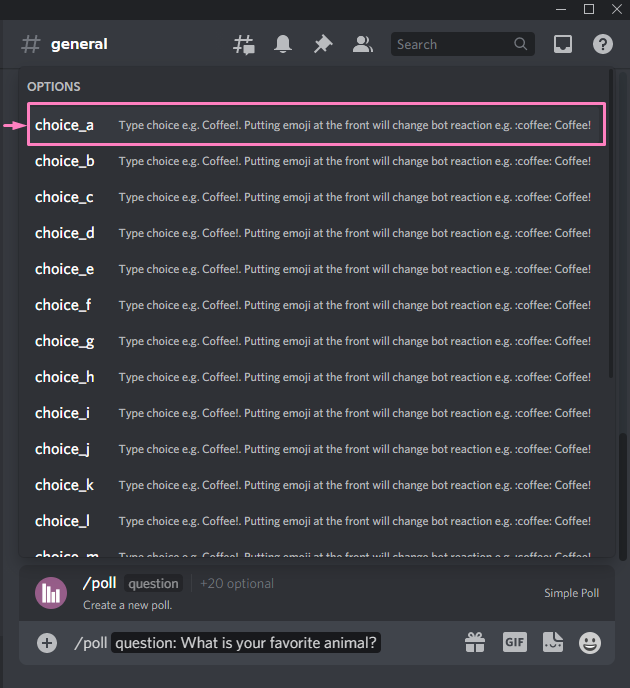 To add the next option, again, you have to press “TAB”. Next, select the “choice_b” as the second option and enter a value: 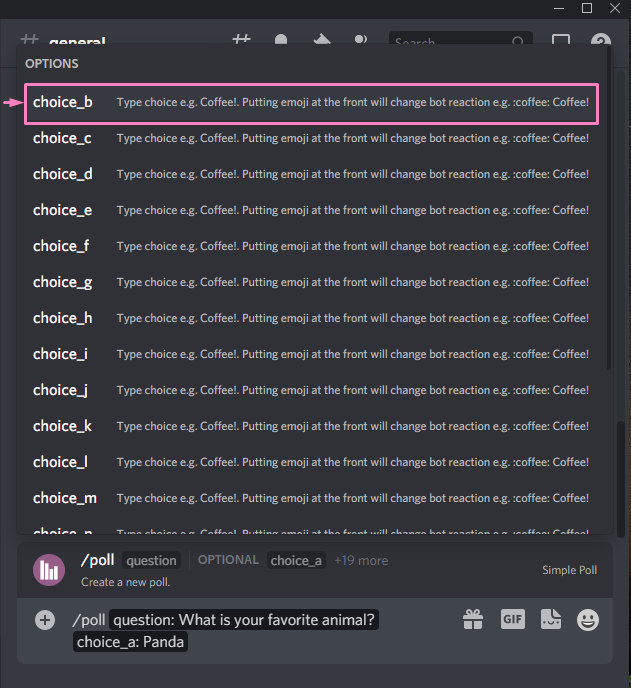 For our poll, we have entered “Bear” as the second choice. You can specify as many options as you want for the poll; however, we will add three for this example: 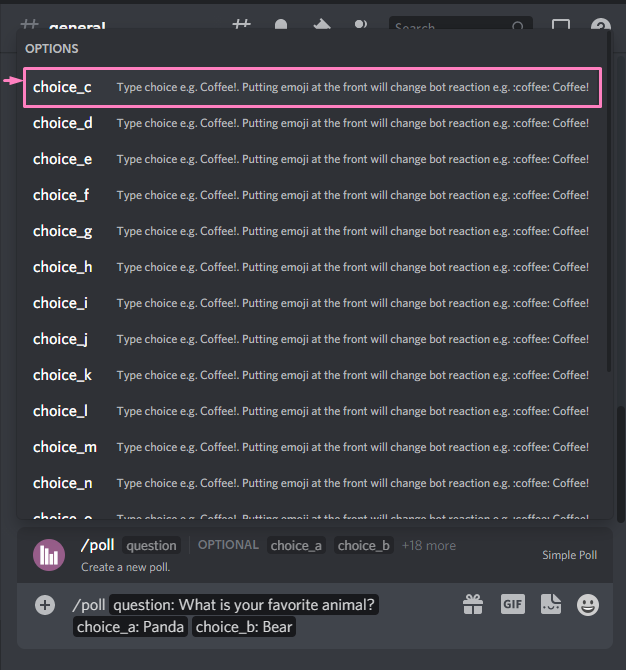 After writing out the “/poll” command with the poll question and its related options, press “Enter”. Your poll bot will send the created poll in the text channel of your Discord server: 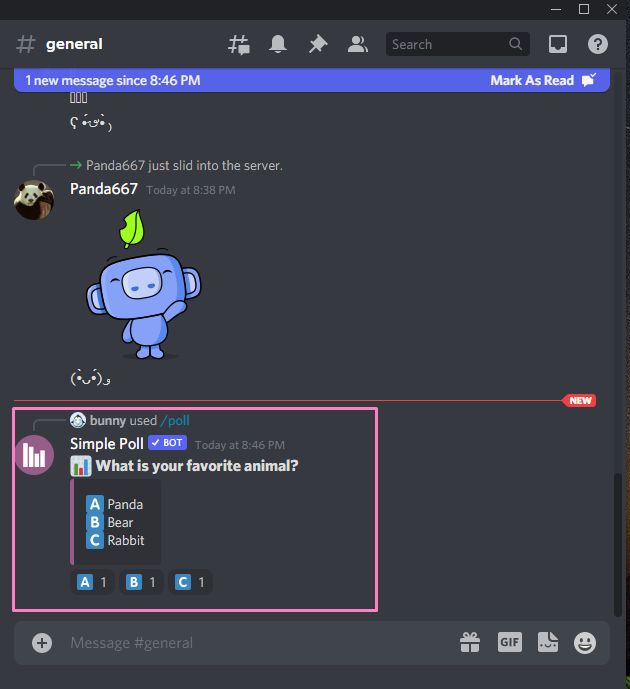 Your server member can participate in this poll by selecting the “A”, “B”, and “C” choices:

How to use Webhook for creating poll on Discord

Creating a poll with the help of a poll bot comprises a simple method. However, poll bots offer limited features for customizing a poll. You can use also use Discord Webhook for creating a poll. Webhooks are utilized for sending data and messages in your Discord server text channels through automated way. It has a lot of options that will make the poll more appealing.

If you want to create a poll by using Webhook, then open up your “Server Settings” and move into the “Integrations” tab: 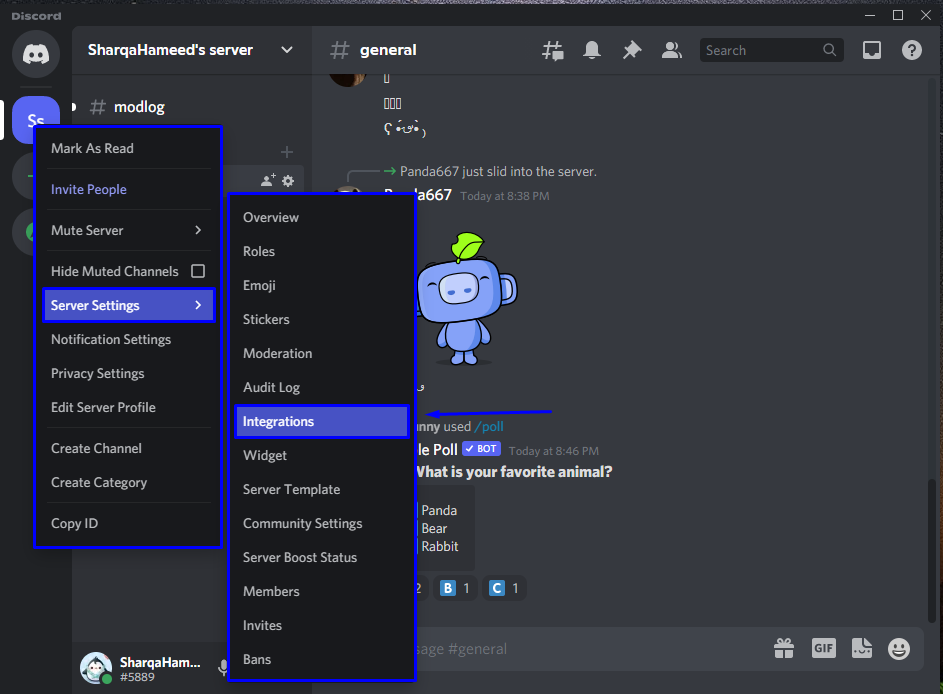 From the “Integrations” panel, click on the “Create Webhook” button: 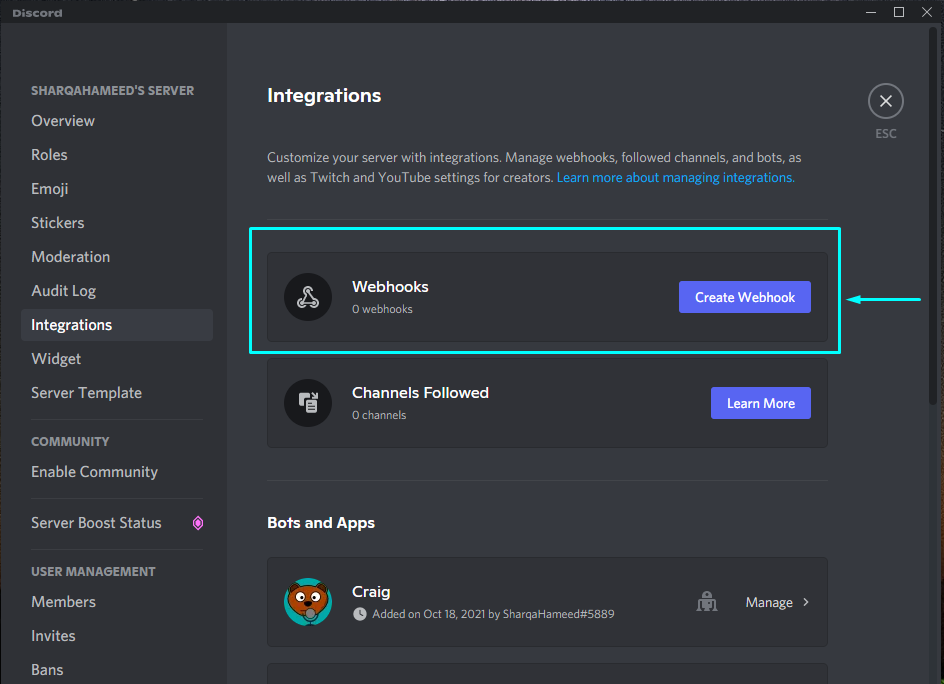 The next thing you have to do is enter your Webhook name, which should be the same as your Discord server’s name. Then, specify the channel where you will send the created polls, copy the Webhook URL and click on the “Save Changes” button: 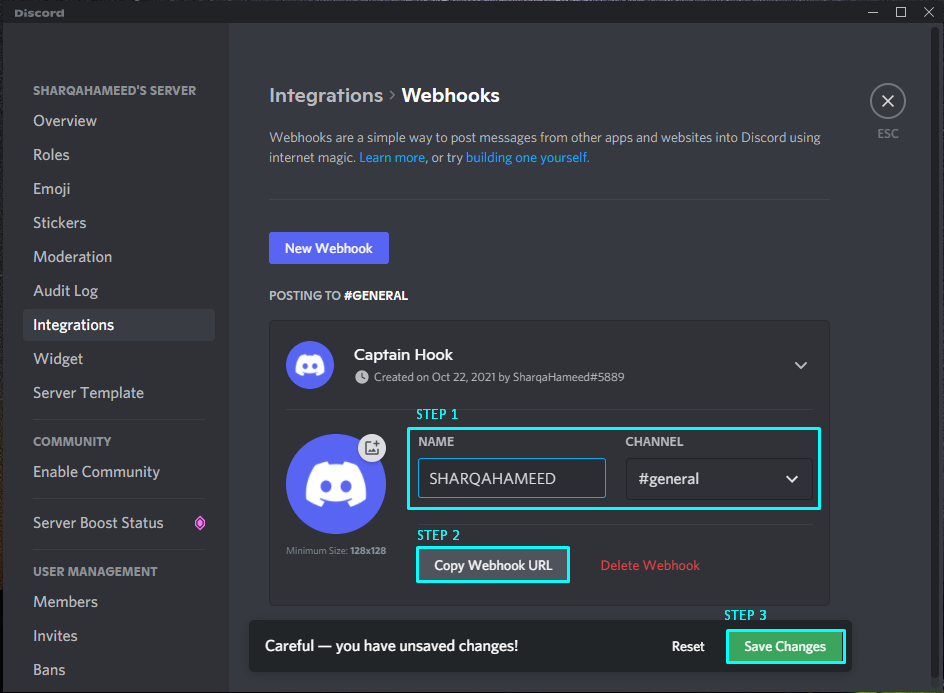 Now, go to the Discohook website, paste the copied Webhook URL in the input field of “Webhook URL” and click on the “Send” button: 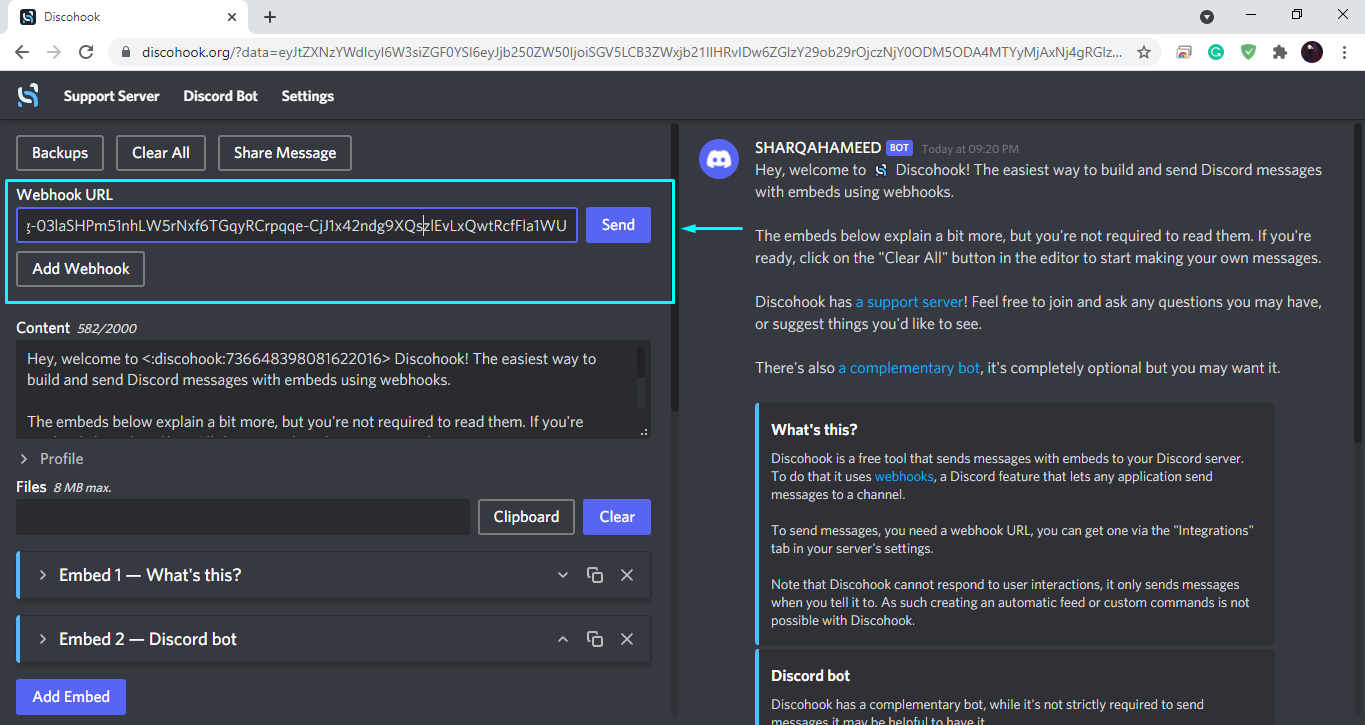 Now, your Webhook is connected to DiscoHook, and you will receive the following message in the text channel of your Discord server guiding you on how to use the DiscoHook tool: 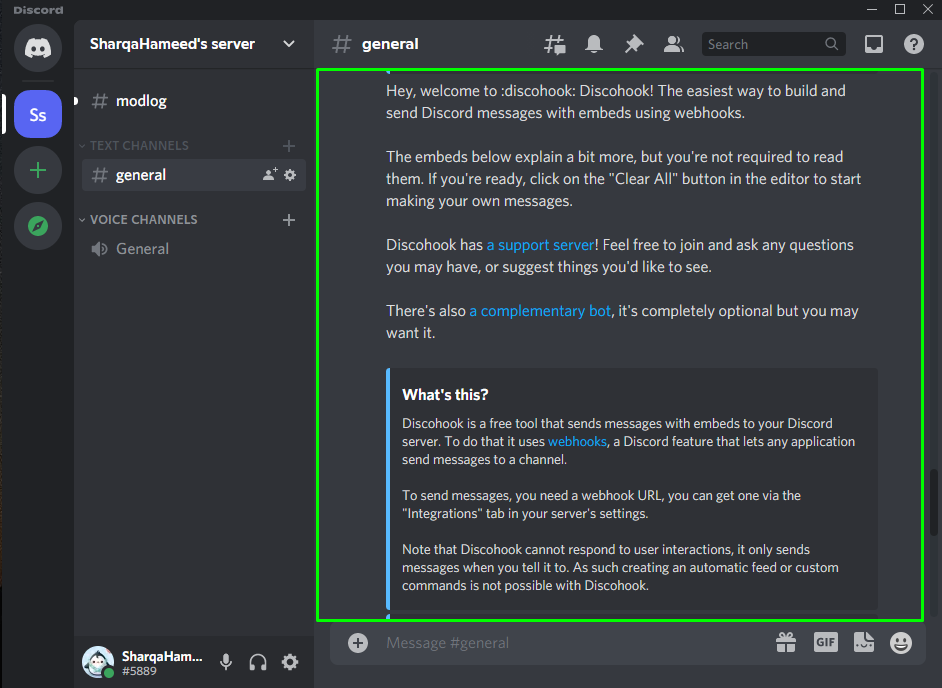 After connecting our Webhook with the DiscoHook, we will customize a poll on the DiscoHook. To do so, firstly, click on the “Clear All” button to erase all of the WebHook content: 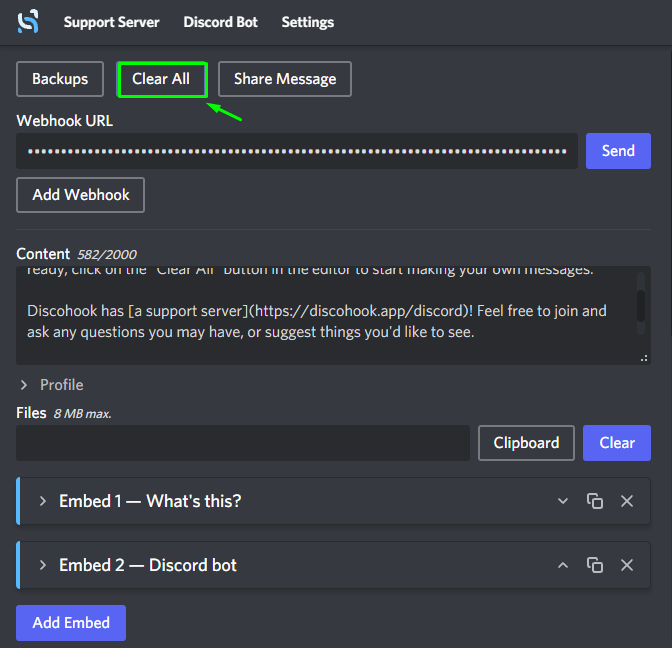 Now, click on the “Add Embed” button to utilize the embed form for creating and customizing the poll: 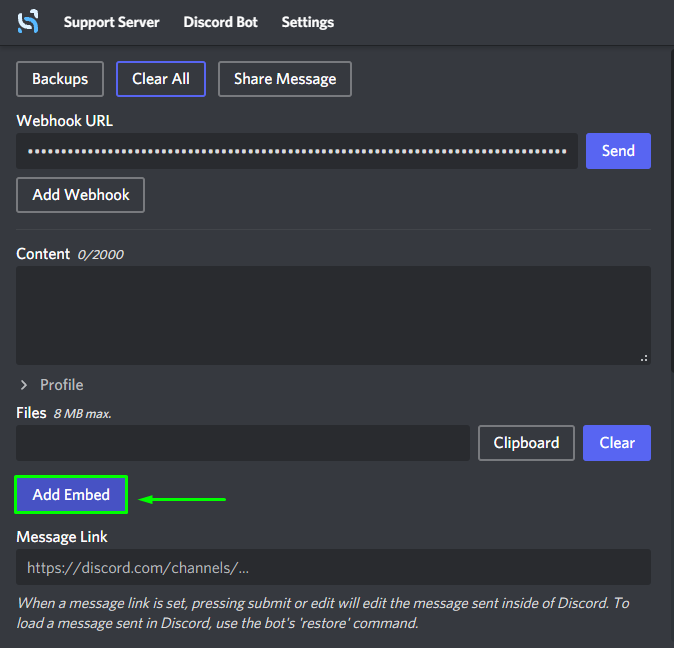 In the embed form, you can enter different information related to the poll, such as its Author Name, Title, body, description. You can also add URLs, images, and footer for the poll: 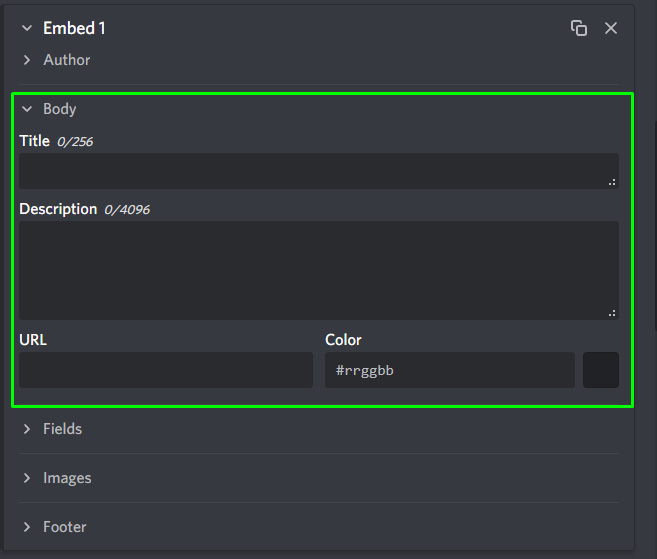 For instance, we have entered the poll question in the “Title” and its choices in the “Description” fields: 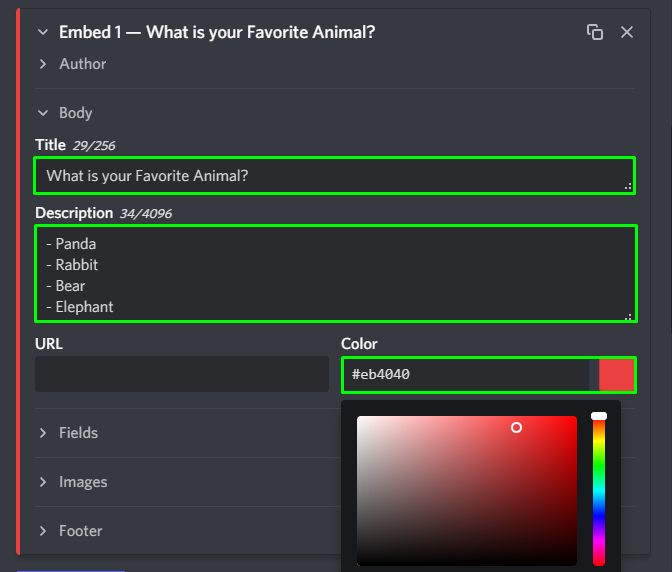 As your poll gets ready after customization, click on the “Send” button: 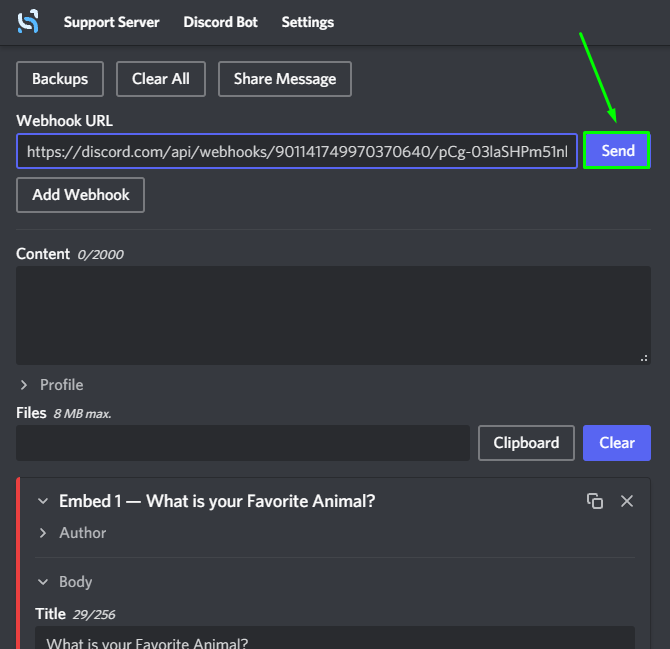 Now, open your Discord server, and in the text channel, you will see that the created poll is sent to the server members which we have created on the DiscoHook website: 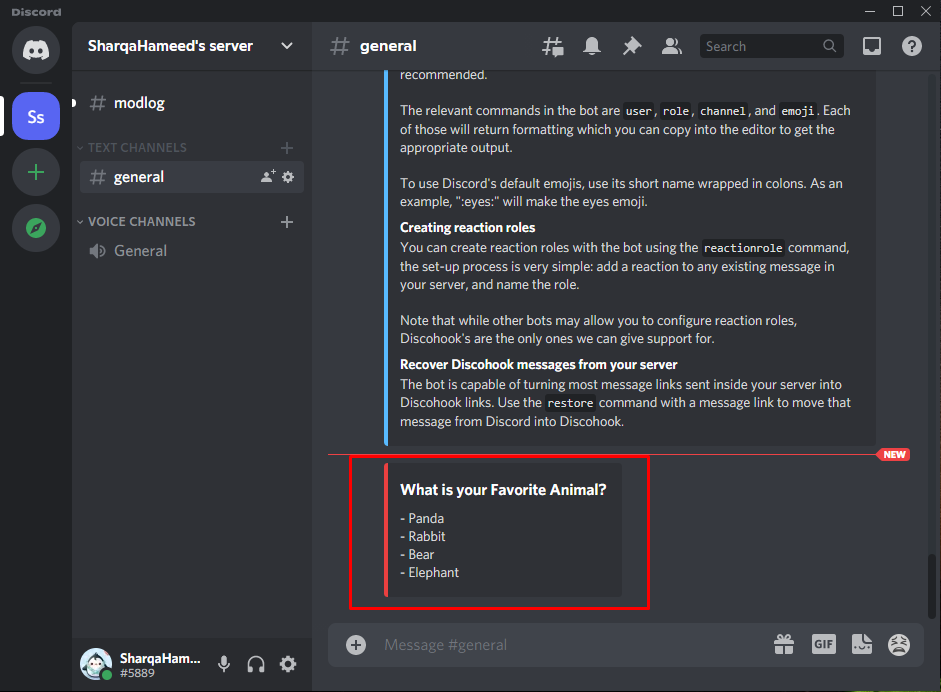 How to add emojis to poll on Discord

Discord also offers you the facility to add emojis to the poll by utilizing the emoji icon which is highlighted in the below-given image:

We are going to add emojis according to the poll choices. For instance, to add a rabbit emoji, we will search rabbit in the emoji search box: 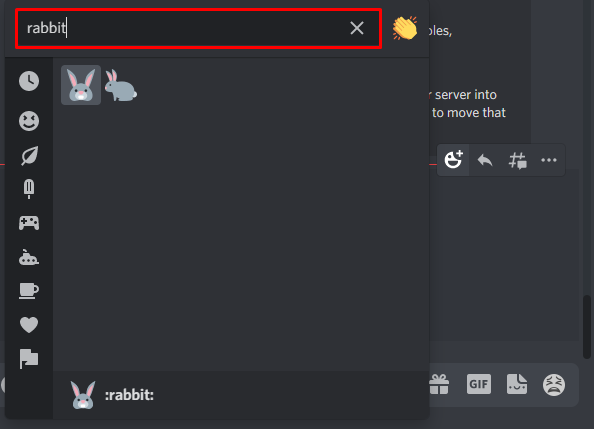 After getting the required emoji, click on it to add in the created poll:

Now, your server members can react to the emojis to participate in the poll:

Inviting a poll bot to your Discord server permits you to create polls in the Discord text channels. Adding polls will help you to maximize the engagement in your Discord server. Using the “/poll” command, you can make a poll for a question and its related choices. However, poll bot has limited options for customization of the polls. You can also utilize Discord Webhook for this purpose. For that, you have to connect your Webhook and DiscoHook. In this write-up, we have shown you how to set up and use poll bot on Discord. Moreover, the procedure of using Webhook and DiscoHook for customizing poll is also provided to you.