JSON is a popular data interchange format that has been adopted by major programming languages. It is used for API communication and the exchange of information across systems.

It is therefore no surprise that you might need to convert a Plotly figure into JSON data and save it to a file or writeable object. You can then use this JSON string and parse it into an easily understood format, such as a PNG image.

Let us learn how we can accomplish this using plotly io.

The plotly io module provides us with the write_json() function that allows us to convert a given figure into a JSON string. We can then save the string into a file or into a writeable object.

The function syntax is as shown:

The function parameters are as shown below:

Let us see how we can use the write_json() function to convert a figure into a JSON string.

In the example above, we use Plotly express to create a simple line graph with values as a Pandas DataFrame.

The resulting figure is as shown:

We can export the figure above to a JSON string by running the code:

In the code above, we start by importing Plotly’s io module as io. Finally, we call the write_json() function and pass the figure and the filename.

Once we run the code above, we should have a file called line_graph.json with the JSON data of the figure as shown in the output below: 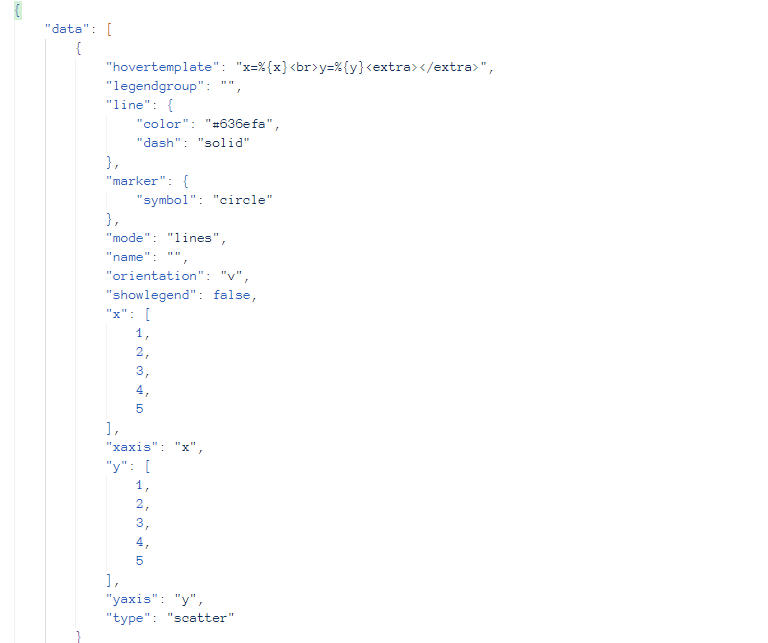 In most cases, the returned JSON string is not formatted. You can fix that by setting the pretty parameter to true as shown:

The code above should return the JSON string in a well-formatted format.

You can set the target JSON engine using the engine parameter. For example, to use orjson engine, we can run the code:

If you do not have ORJSON installed, you can do so by running the pip command as shown:

In this tutorial, we learned how we can convert a plotly figure into a JSON string and save it to a file using the write_json() function.

To learn more about Plotly’s function, check out our tutorials on the topic.