PCIe risers have become a crucial part not only of PC building but also of crypto mining. PCIe risers maximize the space for better airflow and keep the setup neat and organized, especially in multi-GPU configurations. Aesthetics is another reason why PCI risers are on the rise (no pun intended). You can show off your flashy GPU by placing it where it can be instantly seen; you can even place it outside the chassis.

PCIe risers have been widely popular among gamers, crypto miners, content creators, and enterprise users who rely heavily on multiple GPUs. If you’re one of those who need multiple GPUs in your system, but there’s just not enough space, find out about PCIe risers below and how you can use one for your setup.

PCIe risers are simply an extension of the PCIe slots. Risers allow for a different orientation and placement of GPUs other than the PCIe slot. Some workloads just won’t do with just a single GPU. With PCIe risers, you can install numerous GPUs on the motherboard without worrying about the space or the limited x16 slots. You can use any available PCIe slot on the motherboard, even the PCIe x1 slot, and convert it to a x16 slot.

PCIe risers also improve the airflow within the system. Some motherboards have a limited PCIe x16 slot, or if there are multiple PCIe x16 slots, they are usually too close to each other. Because GPUs are bulky, especially those with built-in fans, small-form-factor desktops and even those of standard size often have limited space in-between the GPUs. This can cause GPUs to generate more heat inside the system and may not be safe for the motherboard and other nearby components. Since GPUs still haven’t kept up with portability, PCIe risers will give them enough space to breathe.

Aside from resolving space-constraint issues, PCIe risers also allow you to flaunt your GPUs. GPUs nowadays come with designs worth bragging about, and it would be a waste to hide the fancy lights and sturdy fans they come with inside the casing. With PCIe risers, you can exhibit your GPU’s design in any orientation you desire. If your casing is not transparent, you can choose to place your GPU outside the chassis to expose the beauty of your graphics cards.

There are different varieties of PCIe risers, but the most common ones are the PCIe Riser Cables and PCIe Riser Cards. Both terms are often used interchangeably, but these PCIe risers are notably different from each other. 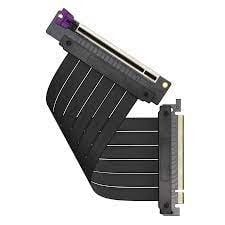 PCIe Extension Cables, sometimes referred to as PCIe Riser Cables or simply extenders is a type of PCIe riser normally used by gamers and content creators for flexibility purposes. One end of the cable consists of a connector with 16 contact pins that fit into the PCIe x16 slot on the motherboard, while the other end consists of a PCIe x16 slot for the GPU. In between the connectors is a cable as wide as the connectors themselves. The cable is soft and bendable and comes in a variety of lengths. PCIe cables allow you to raise the GPU from the motherboard and move it to a different location. This type of riser does not necessarily allow for the installation of numerous GPUs as it still connects to the x16 slot for optimum performance. This, however, allows for better spacing of multiple GPUs, which in return improves the airflow. Gamers also tend to use this type of riser more for aesthetics and cooling purposes.

A riser cable is an unpowered type of PCIe riser since it doesn’t have its own power port but draws power from the PCIe slot instead. When choosing a riser cable, it is recommended to pick the shielded variety for lesser interference, better signal integrity, and more stability. 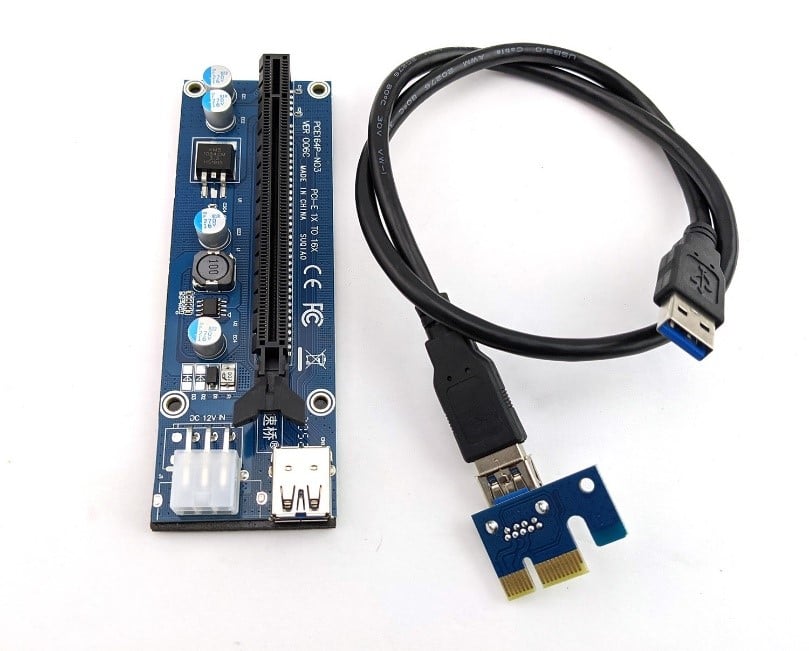 A PCIe riser card is made up of a x16 GPU adapter, where the GPU goes in, and a x1 or a x4 GPU adapter that goes into the motherboard’s PCIe slot. The two adapters are connected via a USB cable. This is a powered type of PCIe riser, and it helps to take some load off the PCIe slot. Onboard the riser card is a power slot which can either be a 4-pin Molex, a 4-8-pin PSU, or a 15-pin SATA. There is also a universal type of riser card that contains multiple power connection options on a single board.

As this type of riser only connects to a x1 or a x4 PCIe slot, it cannot deliver higher bandwidth than the riser cable. This is ideal for workloads that are not bandwidth-demanding but needs the efficiency of multiple GPUs. This is most commonly used in cryptocurrency mining rigs.

Since data needs to travel an additional distance when using a PCIe riser, it is always concerned whether the performance will be affected. Generally, PCIe risers will have a very minimal effect on the GPU’s performance, with an impact that is almost negligible; otherwise, PCIe risers won’t be as widely used as they are today. The additional distance will slightly increase the latency, but it would be barely noticeable.

It is recommended that you choose PCIe risers from trusted brands or at least get PCIe risers of good quality. Signal degradation and instability might manifest in the long run if PCIe risers are made of poor-quality materials. When it comes to riser cables, shorter is better. The quality of the signal decreases as it travels through longer distances. Choose cables that are not too long but just enough to keep a decent space in between the GPUs or long enough for the GPU to be placed on your desired location.

PCIe risers provide flexibility in positioning the GPUs inside or outside the casing. This, in turn, provides better airflow and keeps the GPUs at a lower temperature than when they are closer to each other. PCIe risers allow installation of multiple x16 GPUs, a feature that most motherboards lack. In addition, it improves the visual impact of your rigs by letting you place the GPU in a location where its design can be instantly noticed. PCIe risers have already existed for a few years, but they continue to reach new heights and have become a necessary accessory in a multi-GPU configuration, especially in gaming, enterprise, and crypto mining rigs.