“The dataframe and series approaches that pandas offer us can be used for every column in your dataframe and are designed to work with strings. Using the “applymap(str)” method, we can change the dataframe into strings, as you can see in the sample below. This method will easily convert a data type into a string type. In pandas, we primarily used “object” as the data type for string. We may determine the total number of characters included in the column values by utilizing the “length()” technique in the string processing.”

The Syntax for Converting Dataframe to String

Example 1: Convert the Dataframe Into Strings by Using applymap(str)

In Python, there are many constructed methods for working with strings. Each of these methods returns a new value without altering the original string. For string values, the “object” data type is used. In Python Pandas, the text data type is referred to as a “String” or an “Object”. A string may include a word phrase or can also be a number. In this instance, we will use “applymap(str)” to turn a whole dataframe into a string type. The “apply(str)” is used to convert the integers to strings, and the applyamap(str) is utilized to convert the full dataframe to strings.

Let’s now talk about executing our code. To execute our code, we used the “spyder” tool. The Pandas library must be imported first as “pd”. We would then build our dataframe. The dataframe is named “data”. We have three columns in this dataframe “Course”, “Fee,” and “Credit hour”. These columns now have certain values assigned to them. We have a list of courses “Python”, “OOP”, “Virtual_ Studio”, and “Java” in the column “course”. The values for the column “Fee” we have “35000”, “30000”, “20000” and “15000” and in the last column “Credit_hour”, we have “3”, “4”, “3”, and “3”. Therefore, the “pd.dataframe” is being used to create the data frame. In this illustration, we are also displaying the “data types” of our program by using the “print()” function with “df. datatypes”. In essence, “df.datatypes” is used to create a data type for a dataframe.

We are now moving to our program’s main purpose. To convert the dataframe into a string, we utilize “df.applymap(str)”. Using the “applymap()” method, a function can be applied twice to any dataframe element. In pandas, the “str” is mostly used to retrieve the values of dataframes or series. What’s occurring in this program is that this function converts the data types from “integer” to “string” data types. Invoking the “print()” function, we are now displaying our dataframe and its data types after using the “applymap(str)”. 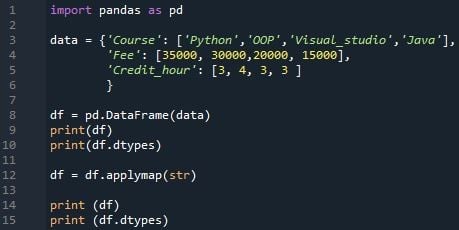 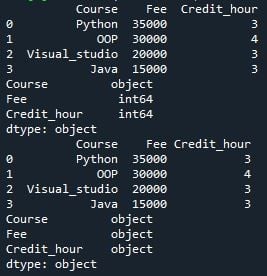 Now start the coding. The Pandas library must first be imported as a “pd.” The following step involves creating the dataframe with the same name as the “data” from the previous stage. This dataframe has four columns “Course”, “Charges”, “Duration,” and “Discount”. For each of these columns, we have listed certain values. The values in the first column are as follows “Java”, “Graphic_desiging”, “Android_studio”, and “OOP”. In the second column, “Charges,” we have “20000”, “21000”, “20000,” and “24000”. We have the values “1_month”, “2_month,” and “3_month” in the third column, “Duration,” and in the final entry, we have the discounts “20%” and “30%” for the courses. The dataframe is then generated using “pd.dataframe”. The dataframe will now be displayed on the screen using the “print()” function, and its data types will also be printed using the “df.dtypes” command.

We will now use the “astypes()” function to convert the particular column to a string. With “astype()” and the parameters column name “Charges” and data type “string” inside of it, we are converting the column “Charges” to a string in this case. Now, we’ll apply the “print()” function to show the results on the screen.

As we can see, the data type for the column “Charge” in the first case is “int64,” meaning that the values in the column are integers, but when the column was converted to a string, a “string” was shown in front of the “Charge” as a data type. The data type for a string in Python is an “object,” and as the remaining three columns are strings, this indicates that now the entire dataframe will be transformed into strings. 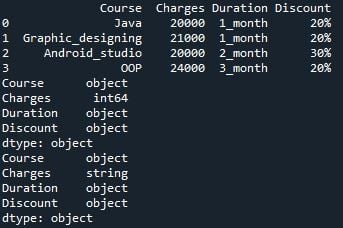 Example 3: Determining the String’s Length for a Certain Column in a DataFrame

After importing the Pandas library to begin the third example of our article, we must construct a dataframe with three columns, similar to the previous example, by using “pd.dataframe”. “Student_Name”, “Roll_Number,” and “Total_Marks” are available as columns. These columns are listed with some values. “Albert”, “Jhon”, “Ava”, “Oliver” and “Amelia” are listed in the first column, while their roll numbers are listed in the second column as “1”, “2”, “3”, “4” and “5”. And in the final column, we provide their final marks “498”, “470”, “444”, “390,” and “489,” respectively. Now that the statement “Dataframe” has been printed, we will use the “print()” function to display the dataframe underneath it.

Following this, we display a statement line that says, “Calculating the length of the string in a column,” and we are calculating this by using the “length()” function. We can observe from our dataframe that the “Student_Name” column contains string values so that we can determine the length of its values. We use this column. Therefore, we are utilizing “df[Student Name]” with “apply(len)”. This will add the total numbers of each of the values in this column, which will then be displayed as a new column in the dataframe with the name “Student_Name_Length”. Let’s turn to its results presently.

Two dataframes are displayed here, as you can see. The second dataframe has an additional column, “Student_Name_Length,” and as we can see, it will calculate the entire number of words and display it there. For example, the name “Albert” has a total of 6 characters. This indicates that this function operates successfully in our program. 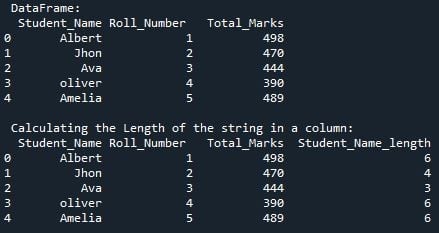 Pandas offer various methods for turning a dataframe into a string. The entire dataframe may be converted to a string using “applymap(str)”, which will transform the data type integer to string. Calculating the characters of string values in a column using the “length()” method is also very helpful. If we wish to calculate multiple single values, this pandas technique will simplify us. It will be simpler for us to work if we apply small, straightforward strategies. We anticipate that if we employ these strategies effectively, our work will be far too simple.