While working on either a small or a big dataset, you may need to clean, modify, or transform it. You may have to change the way the data is presented. Data modification or transformation can be achieved using various Python functions. Python is a high-level and user-friendly language that makes the analysis of data easier. It allows the developers to design and deploy simple functions for data analysis.In this article, we will talk about how you can alter your dataset with the help of Pandas packages in Python. We will discuss the explode() function and see the related example to understand how it transforms the data.

What Is Explode() in Python?

The explode() is a Python function used to transform or modify each member of an array or list into a row. The explode() function converts the list elements to a row while replacing the index values and returning the DataFrame exploded lists.

What Is the Syntax of Explode() Method?

The syntax of the explode function is given below:

The explode() function takes two parameters: “col” and “ignore_ind”. The first parameter represents the specific element of a column that is to explode. It is the required parameter that means you must provide it.

On the other hand, “ignore_ind” is an optional keyword argument parameter which means you may or may not provide this. It does, however, specify whether the initial index must be ignored or not. If it works accordingly, you have provided the value for “ignore_ind”.

What Are the Errors or Exceptions Raised for Explode() Method?

Here are several reasons for the explode() function to raise an error:

The explode() function can explode the list-like data, which includes arrays, series, tuples, sets, and lists. The object will be returned for the dtype of the subset rows, the result for scalar data will be scalar, and the np.nan for a specific row will be returned for empty lists. Furthermore, the exploded datasets’ row order will be non-deterministic. Now, let us see some simple examples to learn how we can design an easy code in Python to use the explode() function.

In this example, we will take you to each step one by one so that you can understand the complete process easily. First, you need to create a DataFrame, and you need to call the Pandas and NumPy library.

See the code below on how to call the Python libraries and create a DataFrame. First, we have imported the required modules (Pandas and NumPy) and then created the DataFrame, as you can see.

Here is the following DataFrame, which is created above: 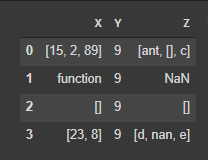 Now, let us apply the explode() function to see how it transforms a column in the DataFrame. In this example, we will only explode one column at one time.

Here is the following complete code:

Below is the output of one exploded column. If you observe that each element of the column “Z” is transformed into a row, while all other columns remain the same. Moreover, the “index” column does not change as we have not provided any value against the “ignore_index” parameter. 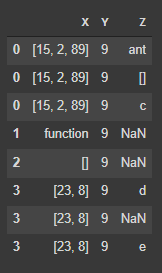 As you can see, we have provided “XZ” as a parameter to the explode() function, which means it should transform both the columns “X” and “Z”. Here is the output after exploding two columns with explode() function:

The error is resolved, and we have two columns exploding simultaneously. 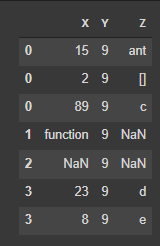 We learned about Python’s explode() method in this post. We have explained the basic introduction necessary to explain the explode() method. We have used some examples to learn how to use explode() function of Python DataFrame and how its errors can be solved. Check out other Linux Hint articles for more tips and tutorials.