Pandas provide a wide range of tools and functions for data manipulation including merging DataFrames. Merging DataFrames allows us to both create a dataframe by changing the original data source and generate a new DataFrame without changing the data source. The phrase “join” refers to joining two DataFrames together to create a new DataFrame. Thus, if you are familiar with SQL or some other tabular data, you surely know what it implies. It can be challenging to properly understand the join types if you are a beginner (outer, inner, left, right). We’ll discuss some types of join with examples in this tutorial. The concat() and merge() functions will be our main focus in this tutorial. To provide you with as many useful alternatives as we can, we will talk about other merging techniques.

How to Combine DataFrames in Pandas

Several methods can be used to combine two or more DataFrames. We will discuss some of them in the following examples.

Example 1: Combining Two Pandas DataFrames Using the Merge() Function
We start this example by creating two simple DataFrames and naming them “df1” and “df2”. To create the DataFrames, we have to import the Pandas module first to use its functionalities. The pd.Dataframe is used to create our DataFrames.

To create our DataFrames, we pass the dictionaries inside the pd.DataFrame() and assign the DataFrames to the “df1” and “df2” variables. 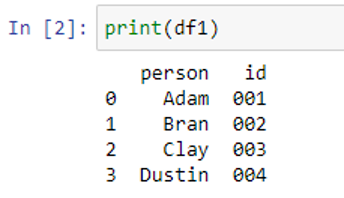 In our DataFrame “df1”, we have two columns – “person” and “id” – that store the names of persons and id numbers of those persons, respectively. 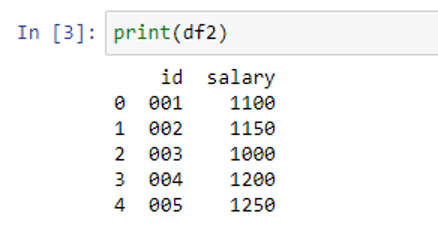 In our second DataFrame “df2”, there are also two columns – “id” and “salary” – that store the dummy id numbers and salaries of individuals. Let’s use the merge() function to join these DataFrames. Take a quick look at all the options that this method can accept before continuing:

Except for the parameters right and left, the majority of these parameters have default values. The DataFrames names that we combine are contained in these two parameters. A new DataFrame is returned by the function itself, which we save in the “merge_df” variable.

As you can see, merged df contains just 4 rows while df2’s original contains 5 rows. This is because a new DataFrame is created by intersecting the right and left DataFrames when the “how” parameter’s default value is set to “inner” inside the pd.merge() function. Therefore, the combined DataFrame would not contain an id that is missing from one of the tables.

If the right and left rows were switched over, this is still true:

The output is the same.

But the ID “005” is still not a part of the combined DataFrames. Even though none of the rows intersect, there could be situations when we want to include the data of both DataFrames in the merged DataFrame containing all of its rows.

We can set the “how” parameter to “right” inside the merge() function.

The function includes every element of the right DataFrame “df2” and left DataFrame “df1” using a right join. If the rows were missing from DataFrame“df1”, we use the how=’left’.

To see the content of both DataFrames, let’s print them one by one. 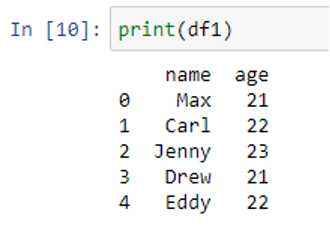 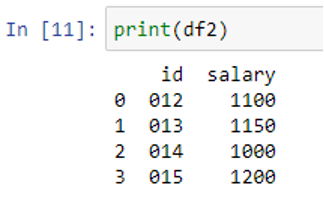 Since we created our DataFrames, look at the syntax of the join() function: 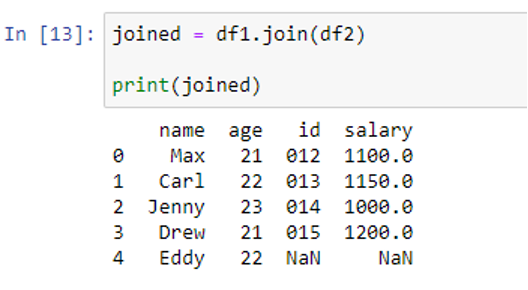 Example 3: Combining Two Pandas DataFrames Using the Concat() Function
Compared to merge() and join(), concatenation is a little more flexible because it enables us to merge the DataFrames either horizontally (column-wise) or vertically (row-wise). The major drawback is that the data is eliminated or discarded if the column labels don’t match or do not exist in both DataFrames. The function’s syntax is as follows:

Let’s print our DataFrames “df1” and “df2” to see their contents. 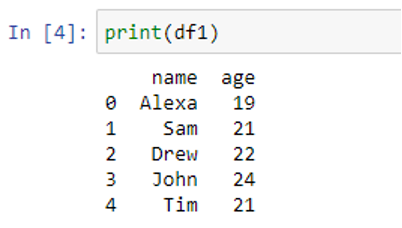 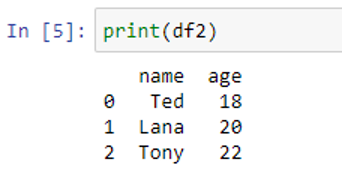 The DataFrame “df2” also consists of “name” and “age” columns having the same datatypes as the “df1” DataFrame’s columns.

Now, we pass the df1 and df2 in the objs parameter as a list ([df1, df2]) to combine them row-wise. And then, we assign the new merged DataFrame to the “merged” variable. 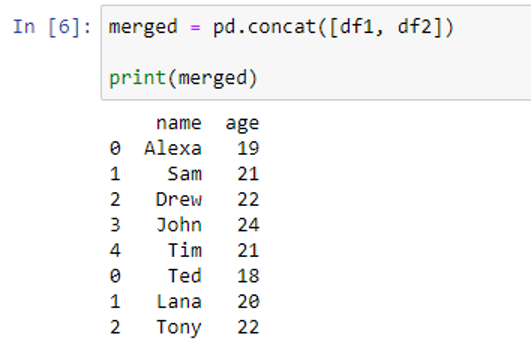 As can be seen, the data of “df2” is row-wise merged with “df1”. However, notice the indexes on the left side of each row. The numbers 0, 1, and 2 keep repeating. We set the ignore_index argument to True to obtain the distinct index values.

The axis value must be changed from the default value of 0 to 1 to combine the “df1” and “df2” column-wise.

You’ll observe that it differs from merge() which matches two DataFrames on a key.

There are also other methods in Pandas like append() and combine_first() and update() to combine two DataFrames.