“In Python, a list is an ordered sequence of items that can be changed or modified. A list’s items are any elements or values that are contained within it. We can define a list by inserting the values inside square brackets [], just as strings are defined by characters inside quotations. There may be situations when we have to perform such operations that can be performed better with lists only rather than a pandas object like series and dataframe. In these circumstances, we can perform the necessary operations to change the DataFrame columns in a list. The list can then be changed again into the series or dataframe.”

How to Convert Pandas Columns to Lists?

There are several ways to convert the pandas columns into lists. We will implement a few of them to show you how we can convert columns to lists using different functions in pandas.

Example # 1: Using Series.tolist to Convert Pandas Columns to a List

We will create a dataframe first, from which we will select a column to convert that column into a list.

We have imported the pandas module to use its functionalities. Then we created a dictionary to store the data. We created three keys, “Name” consisting of the string value, “Age”, and “Salary” consisting of numeric values. We have passed this dictionary to a variable “d”. To create the dataframe from the “d” dictionary, we have passed it as an argument inside the pd.DataFrame() function. To view our dataframe, we can use the print function. 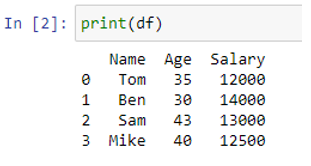 So, our “Name” column is successfully converted into a list. We can also verify it by using the type() function as below:

The type() function has verified that “d_list” is a list, as seen above.

Example # 2: Utilize the numpy.ndarray.tolist() Function to Turn Columns Into Lists

This example is quite similar to example # 1. Same as the previous example, we will create a dataframe first. To create the dataframe, the pandas module will be imported as pd first. Then we will pass a dictionary in the pd.DataFrame() function as input.

The type() function will be used to verify whether our column is converted into a list or not.

So, our “price” column from the “df” array is successfully converted to a list.

Example # 3: Converting All the Columns and Rows to a List Using the tolist() Function 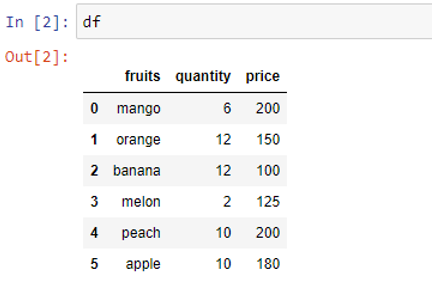 Now, we will use the tolist() method on our dataframe to convert a column of rows to a list.

In the above code, we used df.values; the “df.values” is used to return a numpy array containing the data of our “df” dataframe, without any indexes or column names. Then, we use the tolist() function with df.values to convert the retrieved array into a list. We assigned this list to a variable named “r_list”.

As you can see, all the columns of rows in our dataframe are converted into lists using the df.values.tolist() function.

Example # 4: Making a Nested List Out of All the Columns and Rows Using the tolist() Function 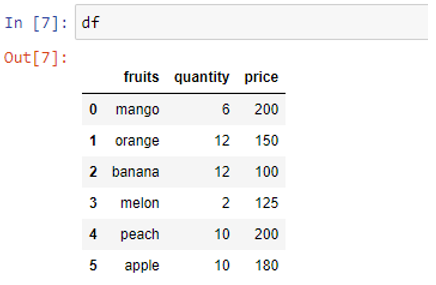 Now we will create an empty list which we will use later on to store the nested lists.

There are three columns in our dataframe, i.e., “fruits”, “quantity”, and “price”. For fetching the data from each column, we will use the “for” loop. Using a “for” loop is a quick and easy approach to iterate through the columns of a pandas DataFrame. The loop will extract the data from columns. Then, inside the loop, we will convert the columns into lists and use the append() function to store the lists of columns in our “temp” list.

As can be seen, each column of our dataframe is converted into a nested list. 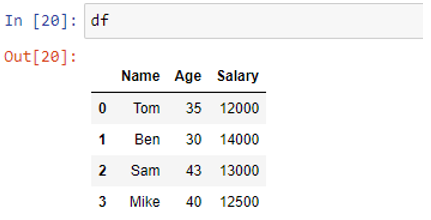 Inside the list() function, we have selected the “Name” column from our dataframe to convert it into a list. To view this created list, we will use the print() function.

The “Name” column is successfully converted into a list.