Using the assign() function in pandas, you can add new segments to a dataframe while restoring a duplicate of the original item. The newly assigned sections will replace the existing ones. One of the packages that make gathering and researching information more accessible is pandas. We select a changing work, determine the criteria under which each of these modifications must be applied, and then pass it to the several assigned functions. When there are two arguments, the target type is the one that tells us which kinds we should try. With one exception we will discuss in a second, this will naturally be the same as the starting type.

How To Use the assign() Function in pandas

To use the assign() function in pandas, first, we have to understand its syntax.

keyword arguments: The column names, and catchphrases, serve as keyword arguments. If the qualities can be called, the DataFrame processes them and assigns them to the new dataframe columns. Even though pandas doesn’t check it, the callable cannot change the input DataFrame. If the properties, such as series or clusters, are not callable. In a sense, they are allotted. A dictionary of strings or lists can be used as keyword arguments.

self: It returns an entirely new data frame with columns that have been added to existing ones as an output.

We can now understand how pandas’s assign() function operates. In any event, we cannot significantly reduce the size of our DataFrame because the whole number of 64 bytes takes up the same amount of space as 64 bytes of strings or floating point values, much like how 100 pounds of bricks weigh the same as 100 pounds of blocks. We simplified the process of later discouraging those segments. We have incredibly few characteristics here, so if we create a capability that takes a subset of a column subset and tries to determine it to the smallest form it can take, it should be able to operate. The following examples will help you better comprehend it.

The temperature will be calculated in this example using the assign() method. While the NumPy module mostly works with numerical data, the pandas module primarily works with tabular data. After importing the modules, we will create a dataframe on which we can apply the assign() function. 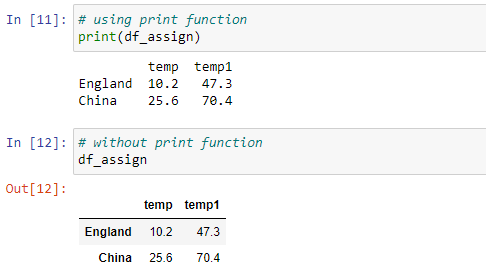 NumPy is imported after pandas in the script previously mentioned. The temperatures of the two countries are then recorded as we generate the dataframe and dataframe’s index for them. Finally, we utilize the assign() method to compute the temperatures using the program’s provided equation. When we assign the print function, the df variable, which represents the dataframe, calculates the mathematical equation and prints the output previously seen. The assign() function calibrates the equation, which considers variables. To convert from degrees Fahrenheit to degrees Celsius, 32 is added to the values of this variable “a” together with lambda. Then, the command completes this equation and outputs the results.

Before running any of these examples, you must import pandas and make the necessary dataframe.

We named our dataframe “s-data”. This dataframe includes variables for sales and expenses and simulated data for sales for each individual. We can add some additional variables from here by using the assign() method.

If all of the individuals in this dataset are employed by the same business or company, let’s say you are working with that information. Unlike “s_data”, which only contains data of employees who work for the same company, other dataframes may have records for salespeople who work for various businesses. What if we wanted to make a variable for the individuals in this dataframe that contained their company name? With the assign() function, we may accomplish the following:

We added a new variable named “business” in this case. The business variable’s value is the same for every row of data. It says “hardware” as the value. Technically speaking, the value is the same for each row. It is a string value, to be more precise. Having stated that, while creating variables with constant values, with continuous numeric data or value, we can assign a new variable in addition to adding textual values like in this example.

We will use the same data frame “s_data” in this example. To be more precise, we will add “profit” as a new variable, equal sales minus costs (Finance and accounting experts will know that this is not an exact method of calculating profit; however, we’ll use this skewed computation as an example.).

Using this code, we will get the following output:

In this case, we added a new calculated column named “profit”. Profit, as can be seen, is just sales subtracting expenses. However, remember that we must use the names “s_data.sales” and “s_data.expenses” to refer to the sales and expense variables inside of assign(). We might also refer to them as “s_data[‘expenses’]” and “s_data[‘sales’]”. You may choose any, but for this example, the previously shown will be used.

We’ll add two variables simultaneously in this example. The “business” and the “profit” variables will be added. We will use the same data frame of previous examples 2 and 3, i.e., s_data.

The variables “profit” and “business” are added simultaneously in this example. You’ll see that we started a new line of code for the second variable in terms of syntax. You can keep all of your code on a single line if you want to, although I don’t particularly suggest it. Direct overwriting of your original data is another option.

Simply execute the assign method and send the results to the “s_data” dataframe specified in the original dataframe name. In certain situations, doing this is entirely appropriate. You may occasionally want to replace your data altogether.