Python is an excellent language for performing data analysis, mainly due to the strong ecosystem of Python programs focused on handling data. One such tool, pandas, greatly simplifies importing and analyzing data. Each element in a DataFrame is applied with a function using the applymap() method, which receives and returns a scalar. The primary benefit of pandas is the ability to transform data and apply analytics. These functions (map(), applymap(), and apply()) are all used to change the data, but there are some distinctions between them and subtle variations in how they are used. However, we will only discuss the applymap().

How To Use the applymap Function in Windows

The single function allows element-wise action throughout the entire DataFrame is applymap(), which is only accessible in DataFrame.

Although some scenarios perform more quickly than apply() thanks to optimization, comparing the two is still a good idea before undertaking any heavier operations.

Only the DataFrame defines this technique. The dataFrame.applymap() accepts only callable. For DataFrames, applymap() is element-wise. Applymap() is more efficient than Apply(). One piece/element at a time can be operated using the applymap() function.

Example 1: Add Value to Each Element of the Data Frame Using applymap()

Let’s first import an online dataset (iris_data), so we can apply our applymap() function to show the results.

You must import the pandas and add the object “pd” to the code to support the Pandas. Simple mathematical procedures are comparatively easier to perform. According to the axis you define, the function argument when apply() is used on a DataFrame becomes the entire row or column. What if you wanted to apply a specific function on each data frame component rather than just each row and column? When this happens, applymap() is helpful. Consider a situation where a mistake has been committed, and you want to correct it by adding one to each element in your data since you have discovered that the error was a repeatable measurement inaccuracy. To begin, let’s define a helper function:

We have defined an add_one function and passed the item as an argument. It will return item + 1, which means it will add one to each data entry in the dataset. Let’s apply it to every element of the original data frame, excluding the target column, using applymap().

If you contrast this output with the original, you will see that each entry has had one added. It demonstrates applymap() function potential.

Example 2: Calculating the Length of Each Element of the Data Frame Using applymap() 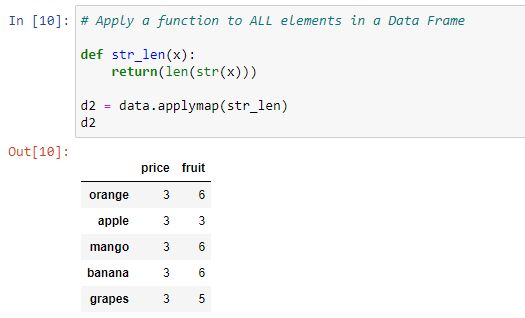 The previous script will convert these numbers into a string using the str() function. Then, it will just check the length using the len() function. So, we can define this function. If we pass that to applymap(), we will get a data frame as an output having the length of all these different entries in our data frame.

Example 3: Change/Replace the Values of the Data Frame Elements Using the applymap() Function

By using the sample() function in the random module, we will produce some sample data.

Now, a data frame with a string datatype will be created. 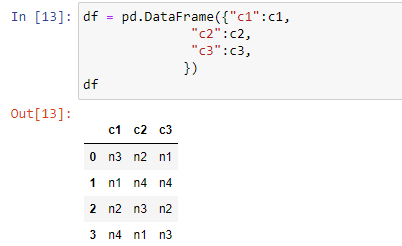 And as a result, we receive a data frame with updated values.

We’ll first make a data frame with specific rows and columns and specify the names of its indexes. 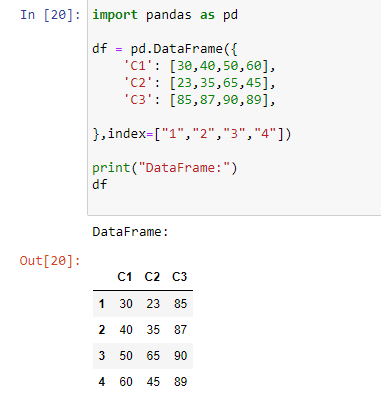 Let’s multiply each item of the data frame by 10. 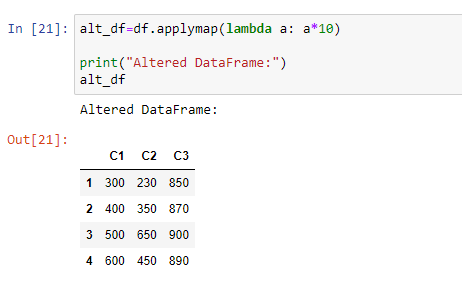 We can apply various operations to the DataFrame’s components in addition to mathematical ones. 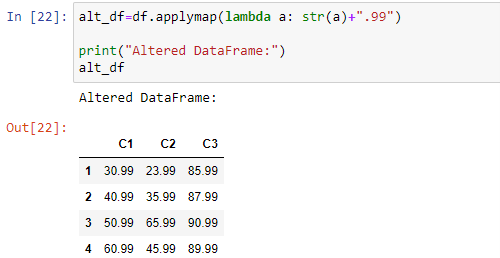 As you can see in the previous image, we have appended the .99 to every value inside the df data frame. We can also use string values to append the data instead of numeric data.