“The Python programming language’s “pandas” software package makes it easy to manipulate and analyze data. It provides specific methods and data structures for interacting with mathematical tables etc. In “pandas”, we can insert empty columns. “Pandas” has several techniques for inserting empty columns. In this guide, we will look at some “pandas” techniques for inserting empty columns in deep detail. We will also demonstrate multiple examples here in which we insert an empty column in “Pandas”. We will also provide the screenshots of outputs as well as the screenshot of the code in this guide. So, it will help you a lot.”

Let’s start by looking at our first piece of code, which will be performed on the Spyder software, which is the best for Python and Pandas codes. We initially import the “numpy as np” into this “Spyder” software after opening it. Python is instructed to import the NumPy library into your current code via the import numpy component of the code. The codes as np section instruct Python to assign NumPy the abbreviation of “np”. By entering the “np” function name instead of numpy, you can use NumPy functions. We also “import” the “panda as pd,” so we will access the “pandas” function by simply putting “pd” instead of “pandas”.

We are defining the DataFrame below by giving the “Info” name to this DataFrame. We utilize “pd” here for accessing the “pandas” function. The “DataFrame” will render the information in tabular form. There are two columns in this DataFrame, which we have created here with the name “FirstName” and the second one with the name “Age”. The column “FirstName” contains “Virat”, “Allies”, “Daniel”, “Jack”, and “Charles”. The other column, “Age,” contains “21”, “22”, “23”, “24”, and “20”. We utilize “print” so it will render the line on the console screen of the “Spyder” tool. We also render this “Info” DataFrame on the output terminal. We didn’t add any empty columns yet. So, now we are adding empty columns to this DataFrame. 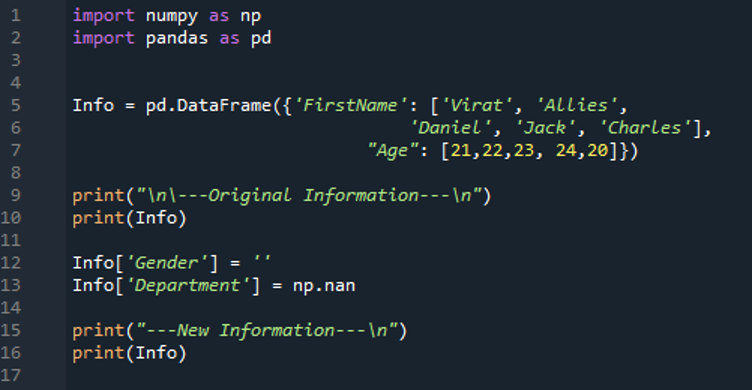 We obtain the outcome by hitting on the “run” button of the “Spyder” software. It renders tabular data, and there are only two columns in the first DataFarme. The empty column is rendered in the next DataFrame. There is no value in the “Gender” columns, and also, the “Department” column is the empty column. 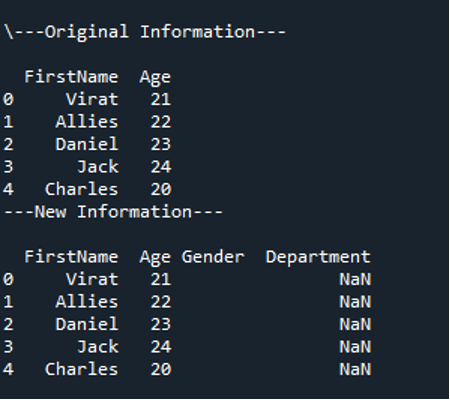 We utilize the above code here but update it a little bit by adding a new method for adding empty columns here. The “Info1” is the DataFrame this time and has used the “Info1.reindex ()” method here for inserting an empty column. You can modify the column labels and row indices using the reindex() technique. In case the new index and previous index are not the same, the values are set to NaN. We added two columns here named “Gender” and “Roll Number” and didn’t pass any value to these columns, so automatically, it will generate “NaN” here. We again consume the “print ()” statement here for rendering this new DataFrame.

Look at the output below; it renders “NaN,” which means not a number, so these two columns, “Gender” and “Roll Number,” don’t contain numbers or values. These are empty columns. 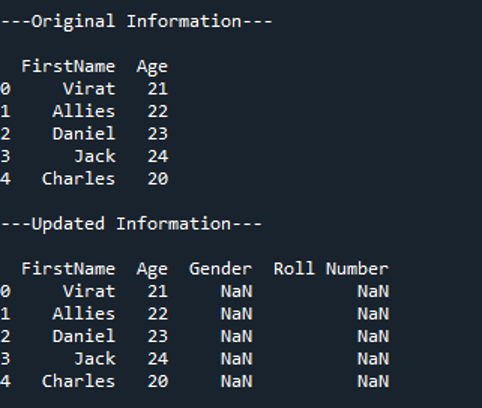 Using the “import” keyword as a “pd” object, we imported the panda’s package. This will be utilized in the code to initialize the data frame. So, using the “DataFrame()” function on the “pd” object to access the new “pandas” data frame, we have introduced a new variable called “Item”. To construct a data frame with a tabular format, we utilize the DataFrame() function. The columns are named “Items” and “Quantity”. In the “Items” column, we have inserted “Milk”, “Juice”, “Dish Wash”, “Hand Wash”, and “Chocolates”. In the “Quantity” column, we are inserting some numbers such as “3”, “2”, “5”, “8”, and “20” respectively.

Also, render this “Item” DataFrame in the same way that we have explained in our previous codes. We are putting the “insert()” function here for adding the empty column to the DataFrame. We first put the position of the column where to add this column. We select “1” for the column named “Price,” and then we also add another empty column with the same method, but this time the column’s name is “Discount,” and it is placed at the “3” position. Here we have inserted two empty columns to the existing “Item” DataFrame, and then we get this updated DataFrame and render it on the terminal. The “print()” is here for rendering this DataFrame.

The first DataFrame appears here and contains only two columns, and there is no empty column in this DataFrame yet. After this, the updated DataFrame shows four columns and has two empty columns in it. 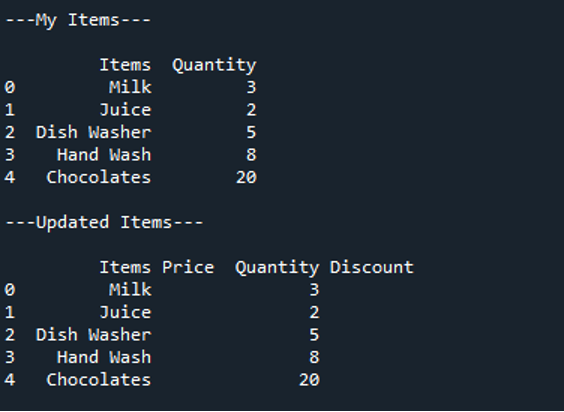 Now, this is our last example of this guide in which we will add an empty column. We imported the panda’s package using the import “pandas as pd”. We’ve added a new variable called “Result” and get the new “pandas” data frame consuming the “DataFrame()” method on the “pd”. We use the DataFrame() method to create a data frame with a tabular layout. The “Items” and ““Stationery”” have those column names. We have added “Soap,” “Sponch”, “Brush”, “Tooth Paste”, and “Eggs” to the “Items” section. We are inserting the stationery items such as “Pencil”, “Pen”, “Rubber”, “Paper”, and “Marker” in the “Stationary” column, accordingly.

Then we have the “print ()” function for demonstrating the given data on the screen and also the Dataframe. We then add the empty column with the name “Empty_Column”. We put this name in the square brackets and also printed the new DataFrame here.

There are only two columns in the first DataFrame that shows here, and no empty columns are present yet. The revised DataFrame now contains one empty column, and three columns are visible after adding this “Empty_Column”. 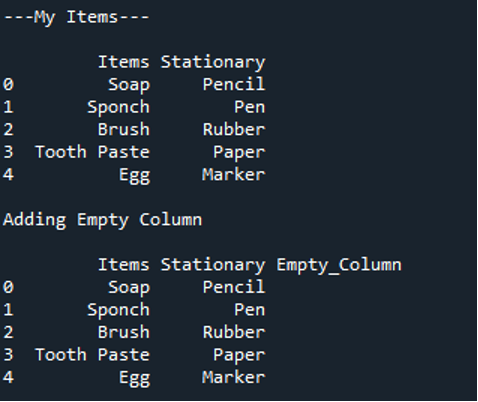 The purpose of this guide is to clarify the rationale behind the “pandas add empty column” method. To make it simple for you to “add the empty column”, we went into considerable detail when describing this concept. Four distinct examples of adding empty columns in Pandas have been described. Here, we use all techniques which are used for adding an empty column in “pandas” and go into great depth about each one. We examined several instances in this guide, going over each line of code in great detail. We have given the output for each code here, along with the codes. I believe you will comprehend this concept after thoroughly reading this guide.