In one of my last posts I showed how you can host NFS storage on your LAN to be used by other appliances. We used the ZFS file system for creating and serving the NFS directory. Your PCs and Mac, if they are a part of the same network, can use this storage as local storage or backup. If you have Gigabit or faster interfaces on both your NFS server and desktop and similarly fast SSD storage for your NFS server then that opens up a whole new window of opportunity. This post discusses certain such helpful scenarios, but first lets see how you can mount this NFS drive on your Windows 10 machine.

Once you have created and started your NFS server go to your Windows 10, search for “Turn Windows Features ON or OFF” and it will open a window with a list of available features. Search for NFS and within the NFS sublist you will want the NFS client utility. 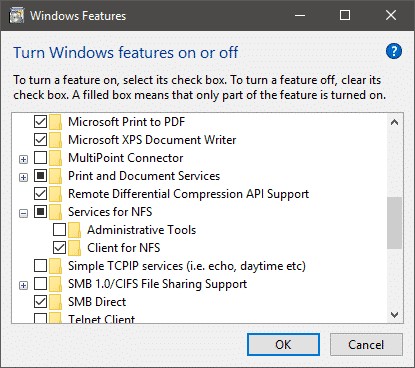 That’s it. Click OK and let Windows do its thing. You may have to reboot your system to let this feature kick in. Now go to your File Explorer, and in the text box where you typically write the path to a folder, type in the IP address of your NFS server prefixed by two backslashes, as shown: 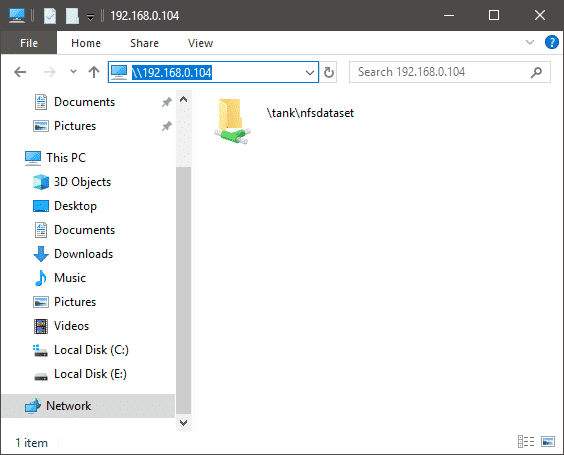 In my case, the IP address of my NFS server was 192.168.0.104, the two backslashes before it tells Windows that what follows is an address for another computer, not a drive letter or something else. Congrats, you can now get the benefits of ZFS on Windows 10!

Now, you can use this folder as if it is a part of your desktop computer. You get the benefits of ZFS, its reliability, its robustness, etc. And you also get the flexibility to work with the favorite software of your choice. This is in fact, a very common practice in the enterprise where a the work directories of all employees is in fact hosted remotely. This way even if a careless employee does something catastrophic to their computer, the data on the remote end will be safe. Features like ZFS snapshots can actually help you take periodic snapshots of your work and store it in a read-only format.

Ransomware can encrypt your folder, maybe even your remote folder, if it is mounted and writable, but it can’t do anything to your snapshots which are read-only. If the ransomware targets Windows 10, it most likely can’t take into account a Linux or BSD underbelly, so that’s also another added layer of security (although not a bullet-proof one).

Speaking of security, when using such a setup you have to make it absolutely sure that the network you are on, your home or LAN, is  trustworthy. That there are no rogue parties on this network. You certainly don’t want to host it over an open Wifi (that is Wifi without password) or on any network where you don’t trust a computer or device that is attached to it.

NFS traffic is not encrypted, and any device that is a part of that NFS server’s network can snoop at the traffic flow, even if it doesn’t have direct read-write access to the files being hosted.

What can I do with it?

The answer to this depends heavily on the reliability of your NFS server and the speed of connection between the server and client. But even if you have mirrored SSDs it is more reliable than not having anything. If you data is crucial but you want local system’s performance you can do a periodic sync instead of working on the remote folder directly.

For workloads like video editing, design and other content creation, where you spend hours fine-tuning everything and a single system crash can result in hours of lost work, NFS can be a real lifesaver. Even when working with text files, like large Git repos, this can be helpful. ZFS’ copy-on-write mechanism can prevent partial writes so you avoid rampant data corruption that follows after a power failure or system crash.

For people who run benchmarking workloads, or just have to do clean installs many time a day, you can save yourself a tonne of time and Internet bandwidth by locally hosting your pre configured system images which can be used to bring a new build upto speed in a matter of minutes.

Projects like Steamcache have really gone above and beyond when it comes to saving you both bandwidth and time. You can cache you game setups on an NFS server and reinstall your entire steam library whenever the need arises. This also frees up space on your local disk. This write up by Arstechnica is a real inspiration behind this write-up and the use cases I mentioned above.

More and more people work from home these days. Your desktop, and the data stored on it, are crucial for your work and it is really worth the time and effort to create a small local backup solution for yourself, if you can. While solutions like the Creative Cloud, Google Docs, Backblaze are really promising too, for various creative endeavors. We should remember that cloud is just someone else’s computer. Nothing is really bulletproof. The difference between having an added layer of redundancy and reliability, and not having anything, can really make or break your day.