You may have tried many types of C functions while executing the C codes in the Linux platform. These functions can be doing some input and output operations as most functions usually do. One of those 2 C functions is the Open() function. The Open() function in the C programming language opens a file in the specified path or directory. If the specified file indicated in the code does not exist at the specific location, this function may throw an exception or may create it on the specified location/path if certain flags are passed. We can conclude that the open function is valuable equally for reading and writing. So, we cover the use of the Open 2 C function within our Ubuntu 20.04 platform along with some examples.

Syntax
The syntax of the Open() function in the C language is given below. Let’s discuss its parameters:

Path is the title of the file that you would like to open or create. It also refers to the file’s location. If we are not working in the same directory as the file, we can provide an absolute path that begins with “/”. We can alternatively specify a relative path where, in some cases, we just mention the file name and extension.

To utilize the flags, here is the list with their respective explanations:

The following library or header file is used in the code for this function usage.

To create or open a file in that certain directory or path, use the VIM Editor. The “openFile.c” is the name of the file that we created. When we type this command, the editor opens the file in editing mode, permitting us to type the lines of code in the file. To close the VIM editor and save the file, press the escape key, type a colon (:) and x, then press the enter key. 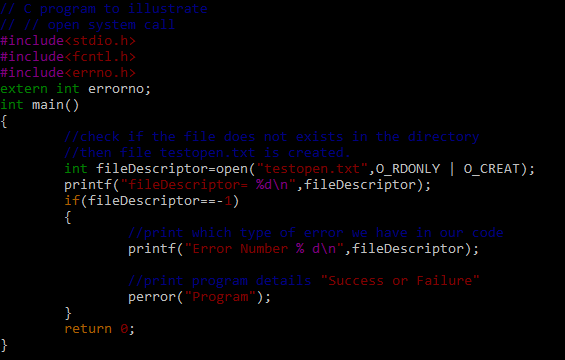 We make use of the GCC compiler to assemble the file. If you don’t have the GCC C-Compiler installed, run the following commands to get it. Simply execute the subsequent instruction in the terminal to see the GCC Compiler version on your Linux-Ubuntu system:

Alternatively, we can run the command before the –o flag, which produces an “a.out” object file in the current directory by default. Using the list directory command, check the output or object file, i.e. openFile.out.

Type the following command to execute or run the output or object file, which displays the file descriptor equal to 3. It indicates that the provided file (testopen.txt) is present in the directory containing the output file.

Open the C file with the VIM Editor once more, but this time, modify the file name (openFile1.txt) in the open function. Then, save and close the “openFile.c” file.

Another change in the open command is passing the O_RDONLY flag which opens the “openFile1.txt” in read-only mode. It means that we can only read the data of the file. We cannot perform the write or update function in that specified file. 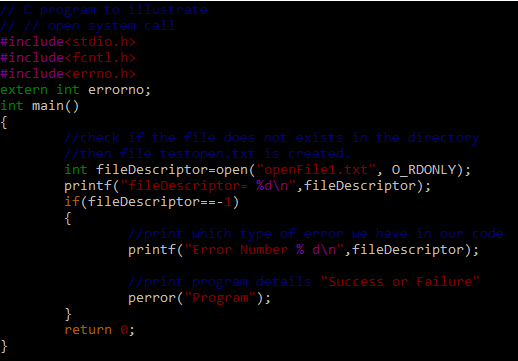 Compile the file again to update the output file. After that, run the code using the object file. Since we do not have the specified text file in the current directory, the use of the open() function has thrown an error and returns a -1 which is stored in the fileDescriptor variable of the integer type. The following screen displays the output of the openFile. If the output file has not been specified, simply type “./a.out” in the terminal to see the file’s output.

We opened the “openFile.c” file in the VIM editor once more and used the O_EXCL flag in the open command. It implies that if the specified file does not exist in the directory, do not create it; if it does, simply open it. Because there is no “openFile1.txt” file in the list directory, the open method returns an error. 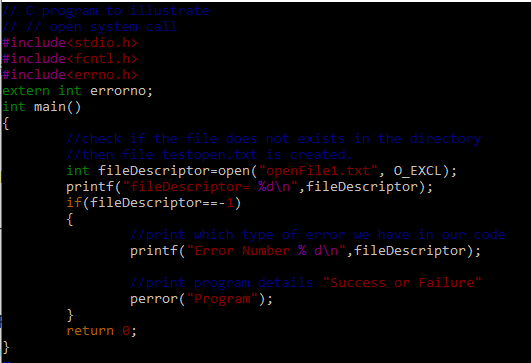 This article is about the use of the Open 2 C function in the Kali Linux system. Using this system call, we discussed how it can be used to open and read the file and its contents easily. We discussed how it throws an error when the file descriptor doesn’t find the required file.