We will examine the definition of the ntpq command in this article. We will also give you a few examples that you may use to check the NTP Server statistics on Linux servers. In the majority of organizations, this is one of the regularly used commands to monitor the NTP server performance. You can use the ntpq command in interactive mode or with command line parameters. The ntpq command also allows you to request the reading and writing of any variable. In the following sections, we’ll see the examples on how to use the ntpq command.

What Is the Ntpq Command?

The performance evaluation of the NTP daemon ntpd is done using the utility program – ntpq. It utilizes the NTPv3 specification RFC1305’s Appendix B’s definition of the standard NTP mode 6 control message forms. NTPv4 uses the same formats. Note that some of the variables have changed over time.

With the options for two types of outputs, raw and pretty-printed, requests to read and write the arbitrary variables are allowed to be grouped. The ntpq can make numerous queries to the server to obtain and output a list of peers in a standard format.

If more than one request parameter is provided on the command line at the time when ntpq is launched, the NTP servers will receive the requests. These servers should be active on each of the hosts that are allocated as command line arguments.

In the absence of any request arguments, the NTP server will try to execute the commands from the standard input on the first host specified on the command line, which defaults to localhost if no other host is mentioned. When a terminal device is used as a standard input, ntpq will prompt the user for commands.

The command line options are given in the following:

After that, run the “ntpq –version” command again. Upon doing so, you can see the current version in the output right below the executed command as we did in the following:

Example 2:
The first example was quite simple to use. Now, we’ll demonstrate on how to use the ntpq command to view the current status of NTP. The performance evaluation of the NTP daemon ntpd is done using the ntpq program. Either interactive mode or command line arguments can be used to control the program.

Type the following command (see screenshot) on your Linux or Unix-based system.

You may see the * here. This means that you are synced to a source (syspeer). Here is a working example of an ntp client where -p displays a list of the peers that the server is aware of along with a brief description of their state.

On the other side, -n does not convert to canonical host names. Instead, it outputs all the host addresses in dotted-quad format.

We execute the “ntpq –pn” command as follows:

You can get the same output by executing the following command which is “ntpq –p”:

Another command that provides you with more information about the state is the “ntpq -c rv” which is provided in the following:

In the output, you can see a lot of information but the leap status is important here. The normal operations are indicated by leap_none, while the system that has never synchronized is indicated by the leap_alarm.

Example 3:
You may view the man page for the ntpq command using the command that is used in this example. To do this, use the “man ntpq” command. See the following screenshot:

In the output, you can see the name which is ntpq, the synopsis, and a complete description of the man page. 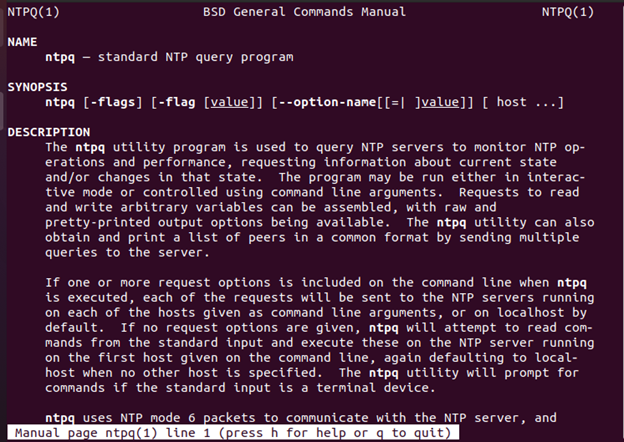 Example 4:
This example is about the timedatectl command. Additionally, it helps you to automate the system clock synchronization.

In this particular example of this article, we will show you the usage of the “timedatectl status” command. It provides the configuration details and the status of the system.

The output includes the information about the time zone, NTP status, and more. The hardware clock time is RTC time in the following screenshot:

The ntpq command in Linux is the subject of this article. This article thoroughly discusses each key issue, from its definition to its examples. If you are not familiar with this concept, this article contains all the information. We have also provided several examples including how to utilize the command line arguments and how to set up the Linux system to function as an NTP server. For a better understanding, you can run these examples on your system and see the results.