This article will cover a list of useful applications that allow you to use a software based, customizable color filter on your monitor’s screen. You can use these applications to set color temperature for your display and choose warmer colors to reduce eye strain by filtering out blue light. These applications are also popularly known as “night light” apps.

GNOME Shell features a dedicated night light option which can be enabled and customized from system settings. If you are using any GNOME Shell based Linux distribution that got a new release of GNOME Shell in the last couple of years, your Linux distribution should have a night light feature built-in. GNOME Shell Night Light has all the features you would expect from a screen filter app. You can use it to set your desired color temperature and then either manually activate the overlay or schedule it. Its scheduling feature allows you to pick up a custom time frame or you can schedule it to automatically activate at sunrise and sunset timings based on your current location. 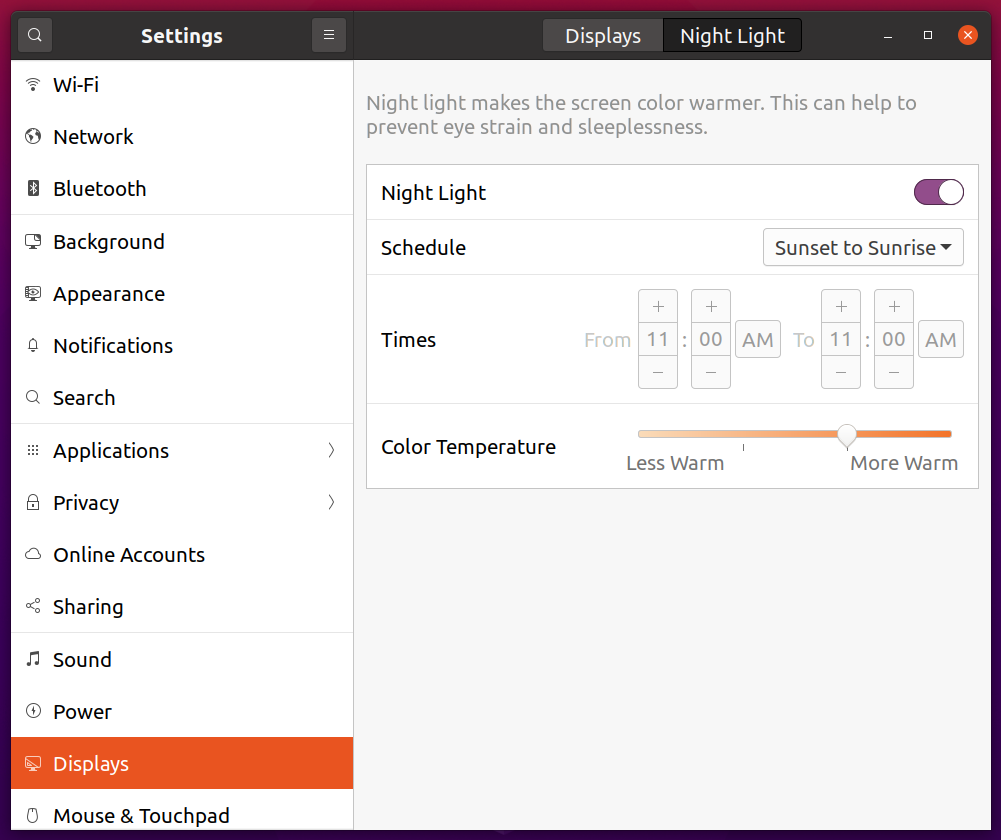 Night light is a part of the GNOME Shell system settings and there doesn’t seem to be a standalone app for it, so you cannot install it in other desktop environments.

KDE’s Night Color is a color temperature utility baked into the main system settings. It works very similar to GNOME’s night light tool and allows you to manually set a color temperature. It can also automatically apply color temperature based on sunset and sunrise timings for your current location or you can schedule it to activate and deactivate at a specific time period. 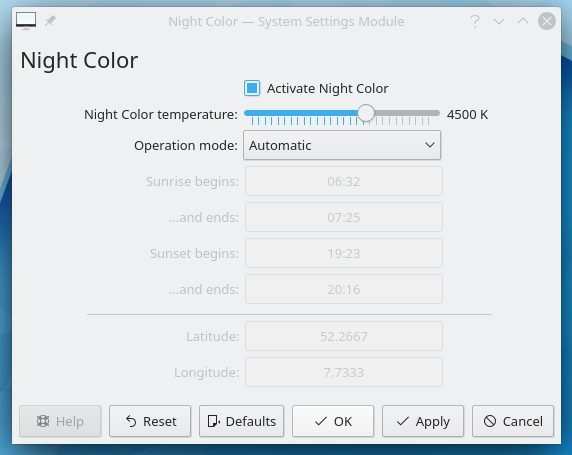 Night light is part of the KDE system settings and there doesn’t seem to be a dedicated app for it, so you cannot install and use it in other desktop environments. In KDE based Linux distributions, you can find it located at Settings > Display and Monitor > Night Color submenus in main system settings.

RedShift is a free and open source command line and graphical software that can be used to modify screen temperature by overlaying a software based filter on your display. It can automatically change colors based on time of the day, mainly at twilight and dawn (based on your current location). You can customize color temperature using its numerous command line options. It also provides a manual mode that can be used to persistently apply a color filter on your screen. The graphical app is limited to a system tray indicator and it just provides a way to toggle the filter. In addition to color temperature, it also allows you to change brightness based on the day night schedule selected by you.

You can install RedShift in Ubuntu by using the command specified below:

RedShift is available in official repositories of all major distributions. You can also get executable binaries from its GitHub page.

To set a fixed color temperature, use the following command (replace 5000 with your own desired value):

To remove RedShift layer and reset it completely, use the following command:

To automatically schedule RedShift at sunrise and sunset, use the command below. It will pick your current location based on system settings.

Gammy is a free and open source tool that allows you to change both brightness and color temperature of your display. It periodically takes a screenshot of your display and analyzes it to automatically apply a brightness and color temperature filter. You can also schedule it to activate at specific times and it supports multiple monitor setups as well. Gammy also comes with a command line interface if you prefer using shell commands and scripts. 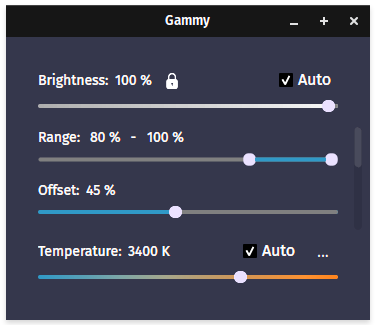 You can install Sct in Ubuntu by using the command specified below:

Sct is available in official repositories of all major distributions. You can also get executable binaries by compiling source code available on its GitHub page.

To set a fixed color temperature, use the following command (replace 5000 with your own desired value):

To remove Sct changes and reset it completely, use the following command: