“Monads are constructed in Scala that carries out subsequent computations. It is an item that encloses the other item. It is important to keep in mind that in this case, the result of one operation at one step serves as the input for another computation that is the parent of the most recent step in the program. Monad is a concept rather than a class or a characteristic. The majority of Scala collections are monads, although not all monads are collections; some monads in Scala are containers like options. In a nutshell, we may state that in Scala, data types like Options, Lists, and other kinds that implement map and flatMap() are referred to as monads.”

We ensure that any succession of deployments of the flatMap and unit functions results in a valid monad if the monad fulfills the three laws. In other words, a value is still subject to the effects of the monad. A completely reusable piece of code that solves a general issue is what monads and their rules define as a design paradigm from the perspective of programming.

According to Left Identity, invoking the flatMap function to apply a function “f” to a value “x” that was raised by the unit function is identical to applying the function “f” straight to the value “x”:

According to this rule, using a series of flatMap calls to apply two functions, “f” and “g”, to a monad value is identical to using “g” to apply to the output of the flatMap function with “f” as the parameter.

Advantages of Monads in Scala in Ubuntu 20.04

Monads are used to contain objects, and they produce the corresponding two functions:

unit(): Similar to Java’s void keyword, unit() does not return any data types.

flatMap() :Similar to the Scala function map(), flatMap() instead produces a series of elements as opposed to a single component. After applying a flatMap to the given Sequence, a List is produced with the inner grouping eliminated and a sequence created. The term “monadic” refers to collections that can support both flatMap and map.

Example # 1: Using Flatmap and Map for the Collection in Scala in Ubuntu 20.04

Occasionally, a monad will remind a container to use a specific interface when working with its values. Monad may resemble a box with an object inside if we model it ourselves. We can retrieve this object using flatMap and one more practical function map. 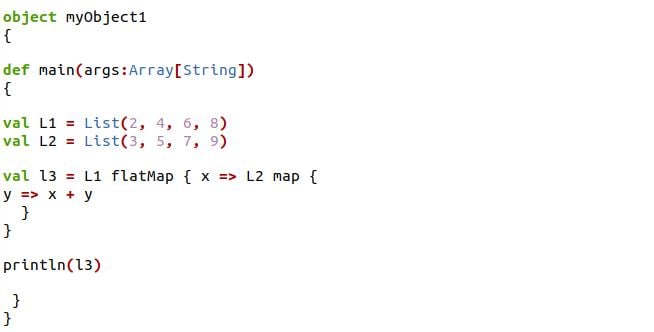 To this scala program, we have defined the object as “myObject1” as the object “myObject1” is created. Now, within the “myObject1”, we have implemented the definition of the Scala main function. This function serves as the primary starting point for running any Scala code. Within the scala’s main function, we have the declaration of the variables as “L1” and “L2”. To these variables, we have assigned the “List” and the “List” to be initialized with the four different numbers, respectively.

We have a different list when the map function is applied, but in the end, the below list is generated after applying the flatmap function.

Example # 2: Using a FlatMap for Removing Internal Group in Scala in Ubuntu 20.04

We have explained the function of flatMap in the aforementioned scala script with the output. Now, in this particular scala instance, we have removed the inner grouping of the collections by using the flatMap() application. 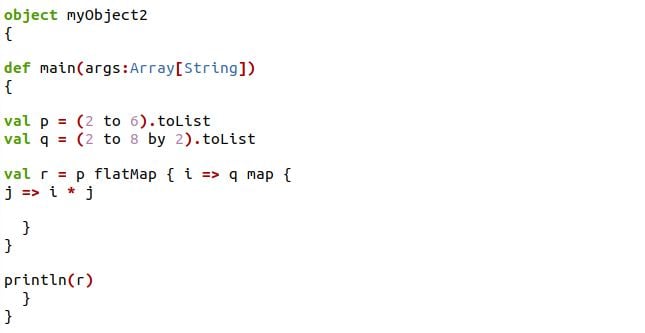 We have established the scala object as “myObject2”. Then, we raised the main method definition inside the “myObject2”. The main definition has the command line argument for supporting the scala functions. The main method is expanded with the declaration of the variables and operation. We have defined the two variables “p” and “q” which have the list of numbers within the range.

Hence the list after removing the internal collections is generated as below.

We discussed the idea of monads in Scala in this guide. We introduced the minimal set of methods that a monad must perform after offering a brief definition of monads, which included the unit and the flatMap. We discussed the three monad laws lastly. The Scala standard library has a wide variety of types that are all influenced by the interesting and practical idea of monads. The collection types of Lists, Tree, and Map, to mention a few, as well as Option, Future, and Either, are all monads.