In mathematics, the modulo operator is widely known to determine the remainder of two values upon division. This mathematical operator can also be used in the bash script. Therefore, we will see how a modulo operator can be used in bash with different ways to get the remainder. Let’s start by logging in from the Ubuntu 20.04 system. Try “Ctrl+Alt+T” to launch the shell terminal on the Ubuntu desktop. Let’s have a few examples.

Let’s start with the first example of simply using the modulo operator on the terminal itself. To use modulo in the shell, we have to utilize the “expr” command to evaluate its value. So, we have consecutively added three “expr” commands to find out the modulo of two integer values each time by using the “%” operator between them and got three remainder values.

Let’s see how a modulus operator can be used within the bash script while using the bash files. So, we have created a new file, “modulo.sh” and opened it within the “GNU Nano” editor.

You need to add the bash extension first within the file, i.e., “#!/bin/bash”. After that, we have two variables, “a” and “b” and assigned integer values to both. Another variable, “res” has been using the modulo operator to calculate the modulus of both variables, i.e., a and b. At last, the echo statement is used here to show the remainder of both variables calculated by a modulo operator within the shell terminal.

When we run this code, it will display 1 as the remainder to values 10 and 3.

To make our code more interactive, let’s take values from the user as input. So, we have added the bash extension. Two read statements have been used here to get input from the user and save to the variables “a” and “b”. Input must be an integer type. The “res” variable has been calculating the remainder by using the modulo operator, displaying the echo command.

After running this code the first time, a user added 17 and 3 and got 2 as the remainder.

Upon running this code a second time, the user added 53 and 3 as input and got 2 as modulus.

Let’s begin to use the modulus in some loops within the bash script. So, open the same file once again to update the code. After adding the bash extension, we have initialized a “for” loop ranging from value 3 to 43. Within it, the “if” statement has been utilized to evaluate the expression. The “expr” command has been used here to calculate the remainder using the modulo operator on the defined range on each iterator divided by “2”. The “if” statement has been checking that if the remainder of the expression does not equal to “0”, then it will continue to print out the particular range value via the “echo” statement. The “for” loop ends after the “if” statement. 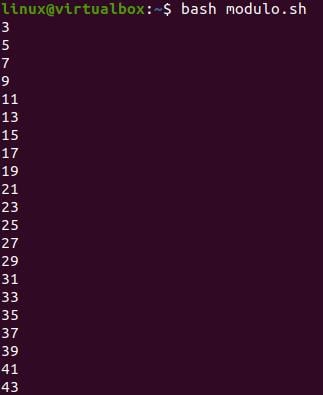 The user added 8 as an input and got “0” as the remainder upon running the code. So, it got a success message.

While running the code a second time, the user added 14 as input and got 1 as its remainder. Hence, it got the “not completely divisible” message.

This whole time, we used the same divisor, i.e., 2. Let’s change the divisor. So, open the same file and update it to “7” as per the snap image beneath. The remaining code is the same. Save your updated bash code to see the results.

After running the updated file, the user added “89” as a dividend. As a result, when divided by “7”, it got “5” as remainder. Therefore, the “not completely divisible” statement got executed.

While running it again, the user added 77 as input and got 0 as a reminder, i.e., completely divisible.

Let’s have our last and most significant example to get the user’s dividend and divisor value. So, the “read” statement has been used here for this purpose. The dividend value has been saved to the variable “a” and the divisor value would be saved to variable “b”. The “if” statement has been used to make a condition. The “expr” command is used to get the modulus of both values, i.e., a and b. The “if” statement checks if the remainder is equivalent to 0 or not. If equals, it will print the “echo” statement of the “if” clause, otherwise of the “else” clause.

After running this code, the user added 77 as input divided and 4 as a divisor. The remainder wasn’t equal to 0, so it displayed the “echo” statement of the “else” clause.

This article would be really helpful to bash users when calculating the remainder of some mathematical values with the modulus operator in the shell. All the examples are easy and explained very well for better understanding.