A named pipe sometimes referred to as a FIFO, is a way for inter-process interaction in computing. It is a Linux version of the classic pipe notion. A traditional pipe is “nameless” and only lasts about as long as the procedure does. On the other hand, a named pipe can last as long as the system is operational, even if the process is no longer active. If it is no longer required, it can be removed. A named pipe usually shows up as a file, and processes connect to it for inter-process interaction.

A FIFO file is a type of local storage file that allows two or more processes to interact with one another by reading and writing to and from it. The main drawback of pipes is that they can only be utilized by one process, which can have both readers and writers or processes that use the same file descriptor list; as a result, pipes have a major drawback: they can’t pass data across processes that aren’t related. This is as they do not share a file descriptor table. However, if the pipes are given names, they can be read and written just like any other file. The processes don’t even have to connect.

Named pipes are FIFO, i.e. First in, First Out pipes. The shell can be used to generate FIFOs. They can, however, be done with the C programming by using the mknod() system call. The mode option determines the permissions that will be used as well as the type of node that will be generated. It ought to be a bitwise OR conjunction of one of the file types given below and the new node’s privileges. The umask of the process modifies the permissions as usual: the permissions of the generated node. If mknod() succeeds, it returns zero; otherwise, it returns -1.

The pathname you are using for the file is the pathname. A set of bits that describe the file type and access privileges you intend to utilize is known as ‘mode”. S_IFDIR, which is used to construct a directory, and S_IFIFO, which is used to establish a FIFO, are the only permitted file types. Most of the time, dev is “Ignored.”

After explaining the basic concept and syntax of the mknod() system call in C programming language, we have defined an example for our user’s understanding. We are implementing our example code in the Ubuntu 20.04 Linux operating system with a GCC compiler for code execution and compilation. We have used the nano command in the shell for the creation of the file. For executing an example in C language, we have used the “.c” file extension.

Let’s execute the listed below command in the console of the Ubuntu 20.04 Linux operating system for file creation.

In our case, the file name is “w.c”, you can modify it as well. Now the file will be created and will open in GNU editor. You have to write the script shown in the below-affixed image. 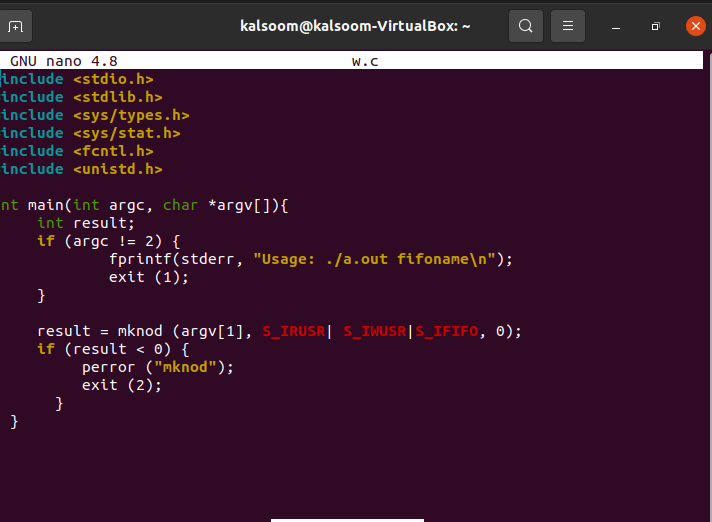 As a result, we used 0 as the parameter. The perror() method returns a standard error message detailing the most recent error encountered while calling a system or library function. After writing and understanding the script, you have to close the file and simply get back to the console. Let’s execute the below command in the Ubuntu 20.04 Linux operating system console for script compilation and execution.

By looking at the above-attached image, you can easily identify that no error comes up upon compilation. The expected output can be seen on the screen as well.