Any git repository contains one or more branches. The git user creates different branches for storing files and folders based on the different topics. It helps the user to manage the code easily. In the development process, sometimes it requires combining one branch with the other branch of the repository for the project purpose. `git merge` command is used for this task. This command finds out the common base commit command by examining the two commit pointers of the merging branches and generates a new merge to combine the changes after running the command. Both local and remote repositories are required to be updated before running the merge command. The way of merging two branches locally has shown in this tutorial.

Run the following command to check the branch list of the local repository named upload-file.

The following output shows that the repository contains three branches, and the main branch is active now.

The following output will appear after executing the above commands if the upload4.php file exists in the current location.

The following output will appear after deleting the branch.

The following output will appear after executing the above commands if the upload5.php file exists in the current location.

The following output will appear after executing the above commands.

If the repository is opened from the GitHub Desktop, then the following information will appear. The history of the repository shows all the tasks that have been done by executing the git commands from the terminal in the previous part of this tutorial. Two commit messages and two merge operations are showing in the history list. All these tasks have been done in the local repository only. If you want to update the content of the remote repository with the new change of the local repository, click on the Pull origin button of the GitHub Desktop. 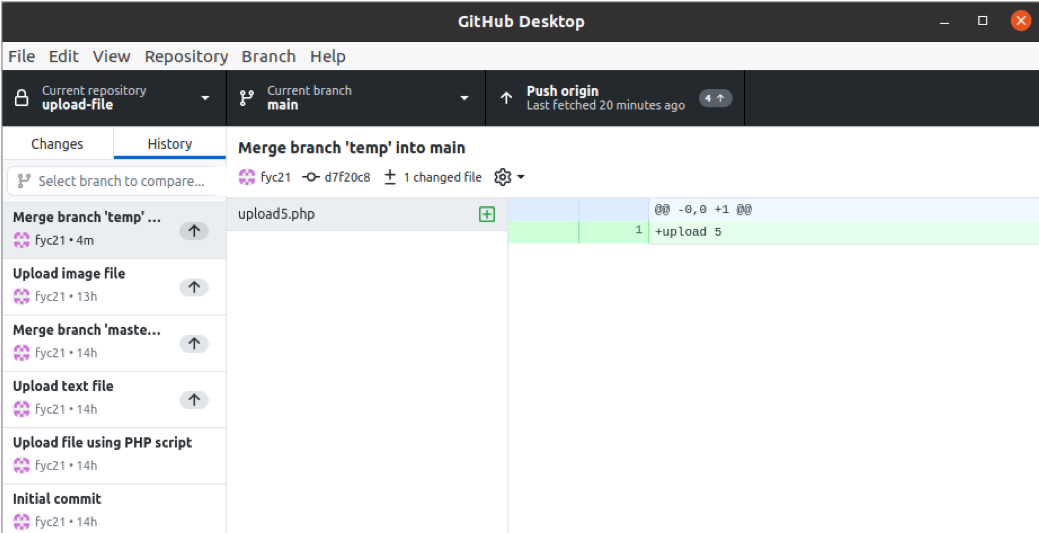 Merging branches is a useful feature of the branch when the git users want to combine the content of two branches. The way of merging two existing branches and merging branches by creating a new branch has shown in this tutorial. If you don’t like to type commands in the terminal, you can use the GitHub Desktop application to merge two branches of the repository.