Python’s Matplotlib framework is being used for visualization techniques because of its large number of technical indicators. It contains attributes that could be changed to generate different graphic layouts. The graphs are plotted to utilize Matplotlib.pyplot.plot() function. We can choose from a variety of graphic designs, such as shade and line patterns.

In this article, we will demonstrate how and when to use Python to modify the linestyle of a graphical display in Matplotlib. Hence, when we want a continuous graphical layout, we would not have to identify the line style as it is solid by the standard. And when we want the pattern to be circled, dashed, or any other kind of, we’ll have to figure out how to adjust the line style in Matplotlib.

With the ‘linestyle’ parameter, we may customize the appearance of a line. Let’s explore a few alternative approaches to integrating linestyles in Python.

In this step, we adjust the style of the line by providing the value to the ‘linestyle’ parameter in the plot().

First, we integrate the matplotlib.pyplot and random modules. Months’ names are stored in the array termed as ‘months’. Here, we use the ‘for’ loop. In the ‘for’ loop the random.randint() technique is used to obtain the sales list.

Further, plt.label() is applied to set the label of both axes. The plot is then assigned a caption with the help of the plt.title() method. After that, by utilizing the matplotlib.pyplot.plot() function, the figure is drawn. Here, we define the color and style of the line. The line color is set to be ‘k’ which represents a black hue. And the linestyle is ‘–,’ which stands for the dashed line pattern. We obtain a chart having a black dashed line by executing the above-mentioned program as seen in the figure below. 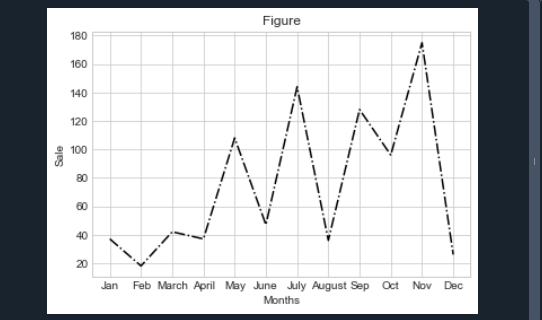 We will utilize the Matplotlib linestyle to integrate several shades of color. To provide it, the plt.plot() method includes a set of arguments.

After importing the libraries, we call the linspace() function of the NumPy library. In addition to this, we apply the plot() function for both axes respectively. Shades for Unicode characters are represented by the letters ‘r,’ ‘g,’ and so on. CSS Shading names include greenish, red, and many others. The titles must be presented in lowercase letters for Matplotlib Linestyle.

The RGB shades could be represented like “#rrggbb,” which is a six-digit hexadecimal value that describes the proportion of red, green, and blue within every tint as a two-digit hexadecimal code (00 to FF). With the Matplotlib Linestyle in Python, we utilized CSS shade names and RGB coloring in this illustration. 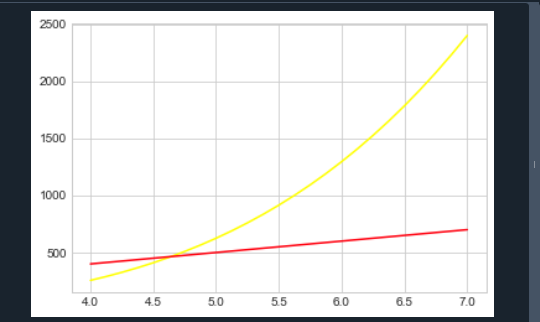 In Matplotlib Python, we will adjust the linestyles. The linewidth option could be used to alter the width of the plotline. The line width is always in pixels. And we will select 1 for a delicate line, 2 for a midrange line, and 5 for a wide line, sometimes more for a particularly thick line.

Firstly, we introduce Matplotlib and NumPy libraries. Next, we utilize the linspace() method of the NumPy library. Further, we apply the plot() function for both axes. We specify color, line width, and line style. For the y-axis, the first argument ‘offset,’ shows the duration just before patterns begin. A sequence of on/off values makes up an additional component.

Over the first display, the valuation is (6, 3, 2, 3), indicating that the line would have a dash of 6 sets, a break of 3 items, a dash of 2 units, and a space of 3 items. This sequence should be repeated to the edge. We specify ‘round’ to the ‘dash_capstyle’ parameter for one line. Similarly, to draw another line, the value ‘linestyle’ parameter is set to be dashed. After all this, we represent the graph by using the plt.show() function. 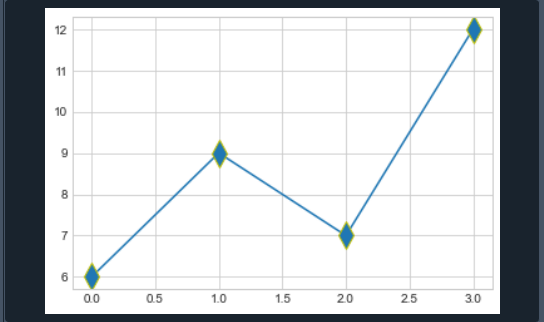 Matplotlib Linestyle Along with Markers

A pointer is a little dot, rectangular, diamond, or other sign. Along with the graph, this denotes a set of data. Markers could be handled with a simple text phrase or a series of arguments that provide capabilities with Matplotlib linestyle.

At the start of the program, we must include matplotlib. This is accomplished by using the expression import matplotlib.pyplot as plt. Here, we employ the linspace() method of the NumPy library to define the range of x dimension.

Further, the plot() method is being used to customize the line style of the graph. This function holds several parameters. We can adjust the style or pattern of the line, its color, and the style of the marker by using this function. The indicators occur at the specified data points. We observe 35 marks at these positions because we utilized the np.linspace() method to create 35 equal intervals pieces of data. 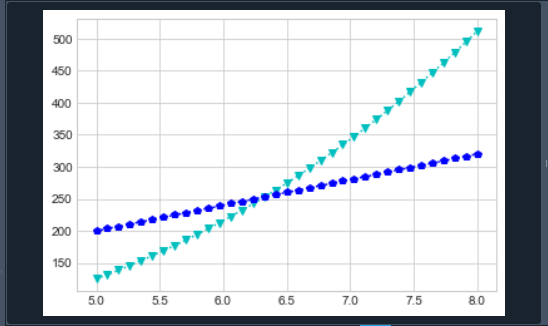 We explained pictorial representations of integrating Matplotlib Linestyle in Python in this article. We talked about three different approaches to color the linestyles. The linestyle could be modified according to the user’s preferences using attributes such as beam width, dash_capstyle, and so on. We also specify different markers for the lines of the graph.