Minecraft is an open-world adventure game where players can explore and build anything they like. They are given an open virtual world to play in and construct stuff. They can also make almost anything they can think of with this game– from castles to coastlines and rollercoasters to cities– it’s a game where you may play whatever you like. On top of its almost limitless space and resources at your disposal.

Aside from that, it has no rules, instructions, or direction for what a player should do or not do, which makes it intriguing. Every Minecraft map (the area in which people play and explore) is different. Minecraft has proved to be a worthy game to play as well as an entertaining one. It can teach and improve a variety of abilities such as:

Players may choose from five different game types and four different difficulty levels when building a new planet– ranging from peaceful to hardcore.

As the game’s difficulty rises, the player is subjected to more damage from opponents (mobs), as well as additional level-specific effects. The peaceful setting bans aggressive monsters from appearing, whereas the high difficulty permits players to starve if their hunger bar reaches zero. The problem can be adjusted after it has been chosen. However, the game mode is locked and can only be changed via cheats.

Your armor and other wearable things can be held and displayed on the armor stand. It may be used for both storage and display.

This article will show you how to make a Minecraft armor stand. The armor stand may be used to keep and exhibit your armor and other wearable things after it is completed. It may be used for both storage and display. Armor stands are a valuable decorative item in Minecraft. Even if you’re not carrying your armor, you can hang it on an armor stand. Armor stands are wooden statues that can equip armor and wield objects in Minecraft. They can be positioned and set up in any manner you desire with the appropriate data tags, allowing you to create sculptures and sceneries of any kind.

How to Create an Armor Stand in Minecraft?

Although, when you first start, the 2×2 crafting grid is ideal, it will quickly become apparent that it is insufficient to create more complicated tools, weapons, and armor. 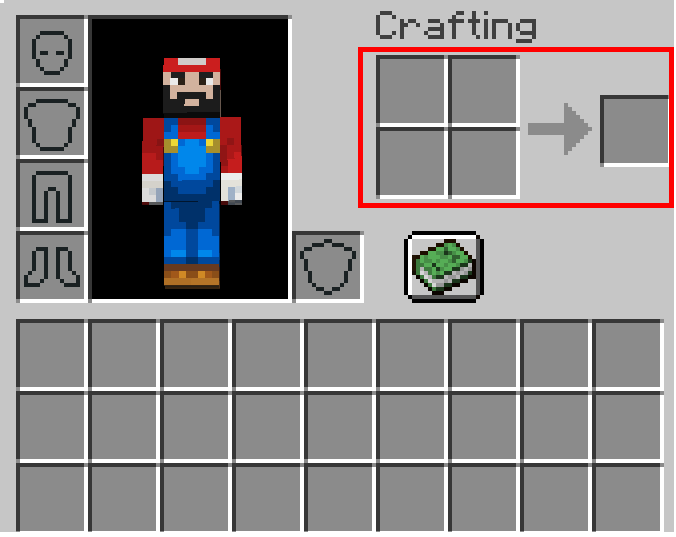 To create planks, trees can provide you with a wooden log. You may either punch the tree trunk or harvest woodblocks with an axe. Any wood will suffice. 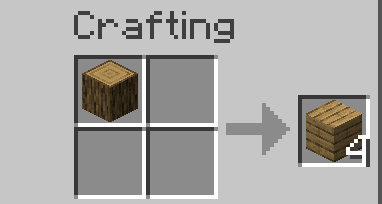 A crafting table is needed to enhance the crafting area. After getting equipped with a crafting table, you will see that the inventory size got more significant, and now it has a bigger window of 3X3.

To make the crafting table, you need to craft four wooden planks. These wooden planks can be taken from any wood, namely oak, dark oak, spruce, Acacia, crimson, jungle, birch, and warped planks. Their graphical representation is shown in the images below. 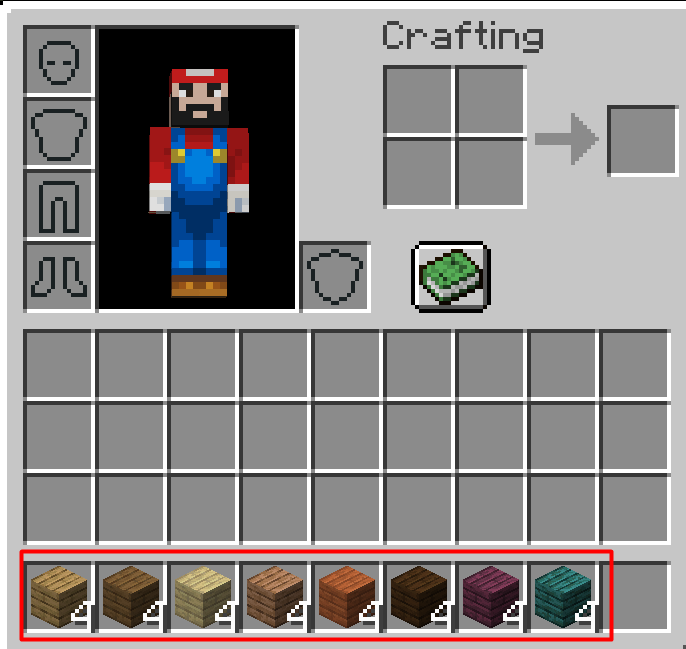 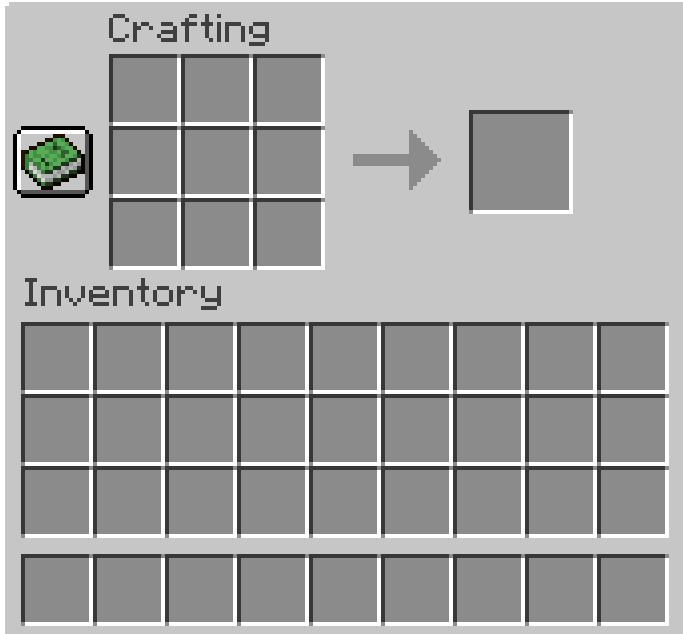 Six sticks are needed to make an armor stand that can be created using wooden planks. Two wooden planks can be used to make four sticks. This step needs to be repeated two times to make a total of eight sticks, from which you can utilize six sticks for creating an armor stand. Keep in mind to place the wooden plank in the same arrangement shown in the image below; otherwise, you won’t to be able to create the sticks.

To create a furnace, you first need to craft a pickaxe. After that, you need to gather eight cobblestone blocks from the mountains, caves, and cliffs using a pickaxe.

After gathering the required cobblestones, you need to place them in the same crafting tab arrangement, as shown in the image below.

You need to drag the furnace into your inventory and then place it in the Minecraft world. The next step is to smelt the cobblestones, and for that, fuel is needed.

The next step is to smelt the cobblestones in a furnace to make them more refined and usable. Fuel is also needed to complete this process that you can get by using the wooden log you have gathered to make the wooden planks. Other than that, you can also use charcoal or coal as a fuel source.

This procedure will generate stones from cobblestones, but you need to repeat the process to build a smooth stone, but this time utilizes the stones you have just created instead of cobblestones to create the smooth stone, as shown in the image below.

To create a smooth stone slab, you need to place three smooth stone in the crafting table by following the exact order, as shown in the image below.

Step 7: Crafting of the Armor Stand

Now that you have everything you need, the last step is to build the armor stand using a crafting table. The recipe for crafting an armor stand is shown in the image below:

Now you have successfully created the armor stand. After placing it on the ground, the result will look like the image shown below: 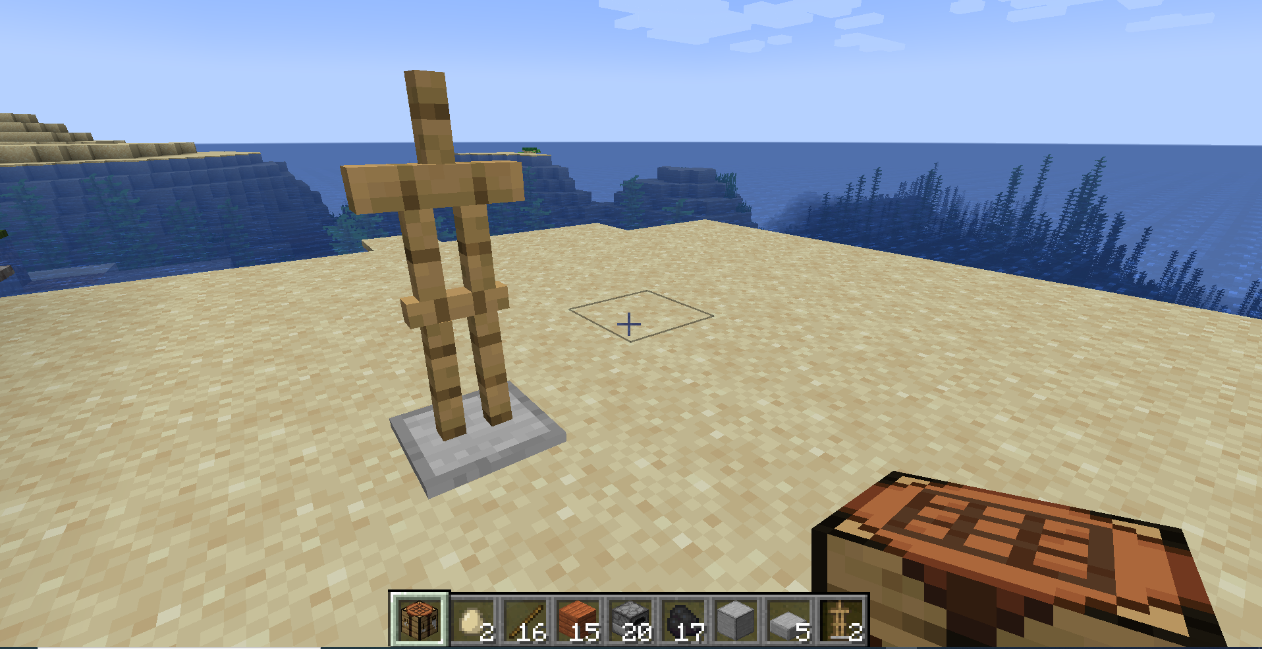 Minecraft is a popular sandbox game that allows players to create anything in a world which has no boundary. To create an item, a player has to mine resources that are quite an exciting aspect. There are tons of items that a player can make. Among them is an armor stand. Armor stands are objects capable of holding and displaying wearable armor equipment. Armor stands were first featured in Minecraft, and its original purpose was to allow players to show off and exhibit their armor on a wooden stand. This article will tell you how to forge an armor stand, including what materials you’ll need and in what quantities.