Why use logistic regression

After understanding the relationship between independent (predictor variables) and dependent (response variable), linear regression is often used. When the dependent variable is categorical, it is better to choose logistic regression. It is one of the simplest models but very useful in different applications because it is easy to interpret and fast in implementation.

We can use the credit record and bank balance of a customer to predict whether the customer is eligible to take the loan from the bank or not (response variable will be “eligible” or “non-eligible. You can access from the condition above that the response variable can have only two values. Whereas in linear regression the dependent variable can take more continuous multiple values.

Logistic regression in R in Ubuntu 20.04

In R when the response variable is binary, the best to predict a value of an event is to use the logistic regression model. This model uses a method to find the following equation:

The following step-by-step example will teach you how to use logistic regression in R.

Step 1: Load the data for the model in R
First, we have to load a default dataset to demonstrate the use of the model. This dataset consists of 1000 observations as displayed below. 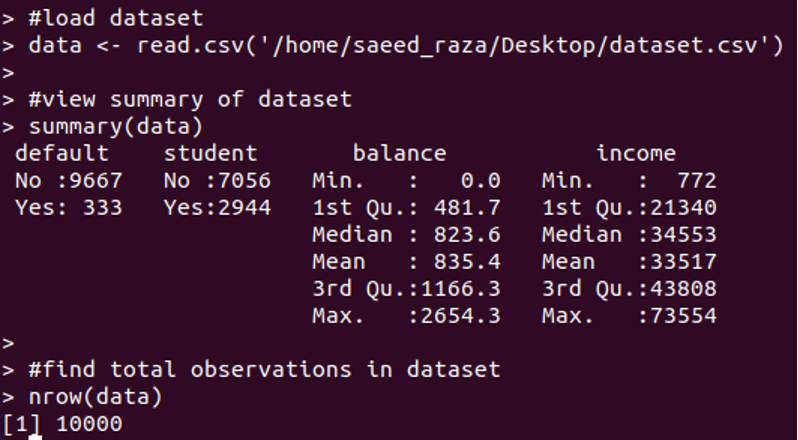 Step 2: Training and test samples creation
We will divide the dataset into a testing set and a training set to test and train the model. 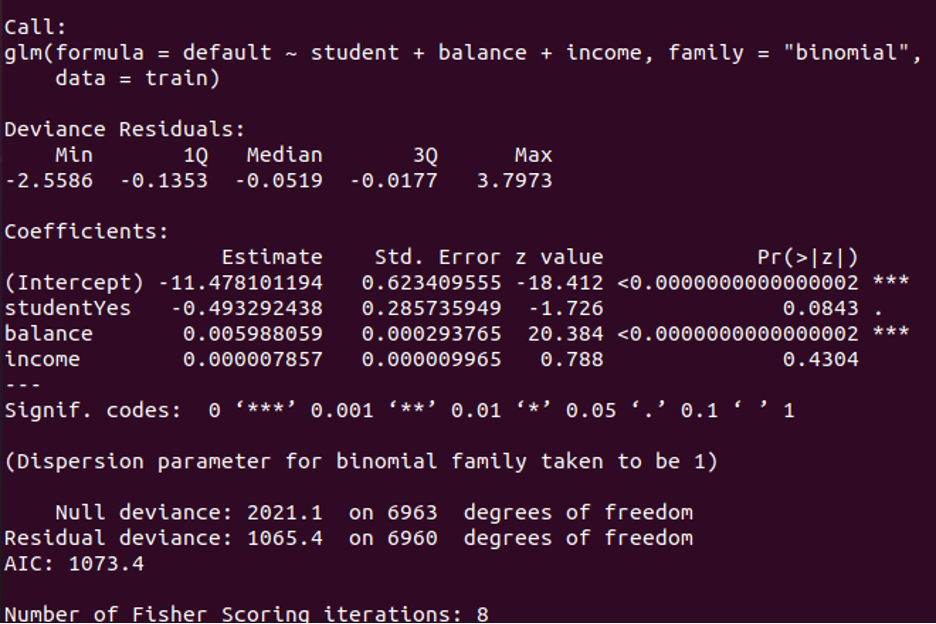 In log odds, the average change is indicated by the coefficients. The P-value of student status is 0.0843 P-value of balance is <0.0000, P-value of income is 0.4304. These values are showing how effectively each independent variable is at predicting the likelihood of default.

In R, to check how well our logistic model fits in data McFadden’s, R2 metric is used. It ranges from 0 to 1. If the value is close to 0 it indicates the model is not fit. However, values over 0.40 are considered a fit model. The pR2 function can be used to compute McFadden’s R2.

As the value above is above 0.472, it is indicating that our model has high predictive power as well as the model is fit.

The importance of a function can also be calculated by the use of the varImp function. The higher value indicates that the importance of that variable will be higher than others.

to calculate every individual in our dataset, the following code is used.

Step 5: Diagnosing the Logistic regression model:
In this last step, we will analyze the performance of our model on the test database. By default, the individuals having a probability greater than 0.5 will be predicted “default”. However, using the optimalCutoff() function will maximize the precision of our model.

After going through this tutorial you should be familiar with logistic regression in R programming language in Ubuntu 20.04. You will also be able to identify when you should use this model and why it is important with binomial values. With the help of codes and equations, we have implemented the five steps of using the logistic regression in R with examples to explain it in detail. These steps cover everything starting from loading data to R, training and testing the dataset, fitting the model, and prediction making to model diagnostics.