In Python, we use the built-in “os” library to show the files in a Python directory. We use the Python os.listdir() function, which provides a complete record of all files and folders in a directory. However, the function returns a repository of every file in a whole file tree. The directory is also considered as a folder for locating and keeping files or several folders. Now, Python comes with several APIs to show the directory contents. Sometimes, while functioning with files in Python, a situation arises where you need to display the files in a directory. To fix this issue, we have come up with different example codes.

Now, we are listing a few prerequisites that are essential before you move toward the examples related to this article:

In our first illustration, we use the os.listdir() technique which accesses all files and folders in a directory. The os.listdir() method in Python displays files and folders in an indicated directory. But it does not return any special characters like “.” and “..”, which the OS uses to iterate through various directories. The function takes only one argument, i.e., the file destination of the directory whose folder and file names you want to access. Not just this, but also, it returns nothing within the subfolders explored by this approach.

We use the Spyder compiler to implement the os.listdir() method. To move further, create a new file by heading to the File menu and then start writing your Python code. Initially, we import an OS module. Then, we define a path where all our files and folders are placed. After this, we all os.listdir() function to access all the files and folders present in the specified location. We can then use a print function that displays all the accessed files and folders. The method os.listdir() is quite simple and helpful. Just two to three lines of code can fix your problem, and the code can be seen here:

After implementing your os.listdir() function, save your code file with any name. However, don’t forget to add the “.py” extension while saving your code file. Now, it’s time to execute your program code and view the list of all files and folders on your screen. Execute by hitting “F5”:

Again, save your program file and press F5 to run the code: 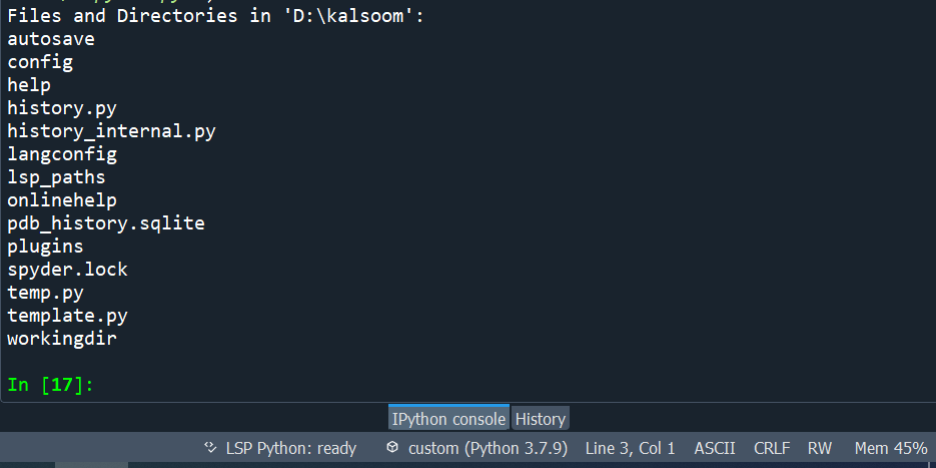