Ping is a diagnosing tool which allows to check the connectivity of any IP address by sending ICMP packets designed to report errors and operational information. This tool is present in all OS (Operating Systems) and it is perhaps the most basic command to interact with a network or devices through it.

Ping uses ranges from device availability check to more complex security auditing being the basis of many methods available on different security scanners such as Nmap, Angry IP Scanner, etc.

This tutorial explains briefly how this command works and how to use it applying flags to customize the “communication” between devices.

Contrary to Windows under Linux the ping is continuous (like ping -t in Windows), this tutorial will show examples for ping changing packet sizes and intervals to accelerate or slow the packets, how to add sound when replies are received,

“ping uses the ICMP protocol’s mandatory ECHO_REQUEST datagram to elicit an ICMP ECHO_RESPONSE from a host or gateway. ECHO_REQUEST datagrams (”pings”) have an IP and ICMP header, followed by a struct timeval and then an arbitrary number of ”pad” bytes used to fill out the packet.”
(Source: https://linux.die.net/man/8/ping)

What we call ping is an ECHO_REQUEST, or a ECHO_RESPONSE packet.
These are packets whose datagram contains IP and ICMP packets in the header.

The ECHO_REQUEST will seek a reply, the ECHO_RESPONSE to confirm the destination is online.

All About Linux Ping Command

A simple ping can be executed without flags defining only the target, the following example shows a ping to Google’s DNS, pinging Google DNS is one of the most popular ways to check if you have internet connection. If you can ping the 8.8.8.8 IP address but you can’t ping domain names, you should probably add the “nameserver 8.8.8.8” line within your /etc/resolv.conf file.

As you can see in the output, the device pinging is receiving 64 bytes from the IP 8.8.8.8, with the sequence of ICMP packets increase, Time to Live and time to reach the destination in milliseconds (ms).

You can specify the size in bytes of the packets with the -s flag and you can also ping targets by using a domain name instead of the IP address as in the example below: 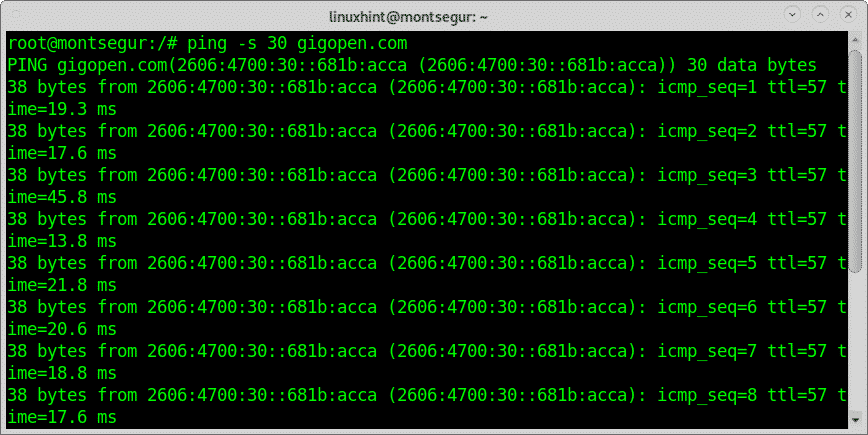 The -a flag will produce a sound (beep) when getting a reply from the destination Gigopen.

The option above may be  good when the host is unreachable and you want to keep it pinging until it becomes online.

The -i flag allows to set intervals in seconds, the following example shows pings each 7 seconds.

While the example above shows how to define a 7 seconds interval, you can speed up pings by running: 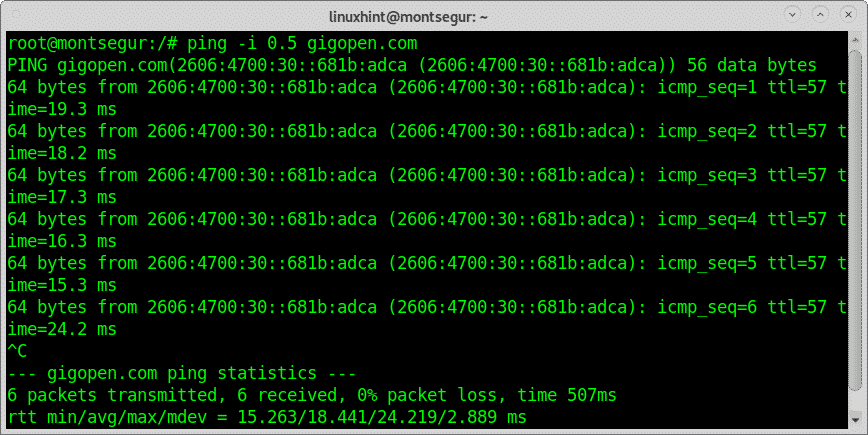 Since under Linux the ping tool runs continuously (like “ping -t” in Windows) you can specify a deadline by adding the flags -w and -W.
The following example with low case -w determines an unconditional deadline for the ping process:

The big case -W will instruct ping to timeout only if replies are not being received, then the -W instructs the time to wait for a reply, in the following example there are replies, therefore the timeout should not be functional:

As you see the operation was interrupted by a CTRL+C. 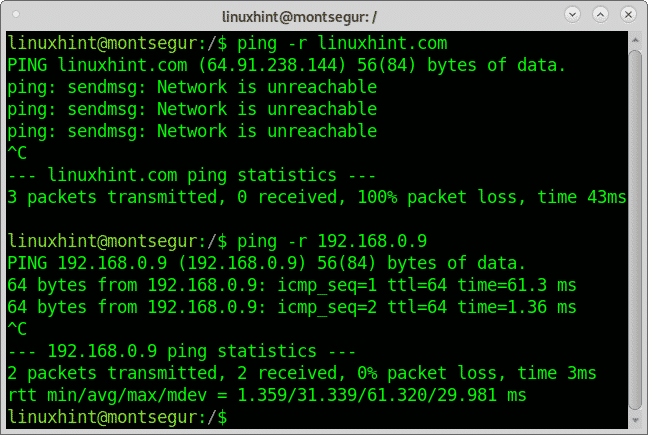 As you can see the ping against linuxhint.com didn’t reach the destination while it worked for a local network IP  address.
Some of ping flags in Linux include:

Note: flags for other OS (Operating Systems) such as Windows variate and are not the same.

You can get more information on the ping command at the man page (https://linux.die.net/man/8/ping).

I hope you found this brief article on All About Linux Ping Command useful.

Keep following LinuxHint for additional updates and tips on Linux and Networking.