In this guide, we will discuss two essential networking concepts that are bridging and bonding. We will see how to set up, modify, and delete the bridges and bonds in the Linux system. We will demonstrate the procedure on Linux Mint 20 Ulyana system. However, you can also implement the same procedure on Ubuntu or Debian.

Bridging is to create a bridge between two or more network interfaces to pass traffic between them. It allows you to share your system’s internet connection with other systems. Consider a scenario where system A (with no internet connection) wants to connect to another system’s B internet connection. All you need is to plug both systems with an Ethernet cable and create a bridge between them. However, to do so, you will need two interfaces on your system B. One interface will be connected to the internet, and the other one will be connected to system A.

Create a bridge network interface using the below command in Terminal:

This command will create a bridge named br0. You can name it anything you want.

For instance, in our case, it would be:

The above command will add enss33 and ens39 to the bridge br0.

Now, bring up the bridge interface:

In our case, it would be:

You can also run the below command to get the interface up and running (In the case of DHCP).

Now, edit the /etc/network/interfaces file and append the following lines:

Now restart the networking services using the below command:

Now the bridge has been set up, and hopefully, you will be able to access the internet from your second system.

You can use the below command to view all the configured bridges on your system and the interfaces attached to them.

Add an interface to bridge

You can add an interface to an already existing bridge as follows:

For instance, to add an interface named ens38 to the already existing bridge named br0, the command would be:

You can also delete an interface from a bridge as follows:

For instance, to delete an interface named ens38 from the bridge named br0, the command would be:

To delete a bridge from your system, you will first need to bring it down. Use the following command to do so:

For instance, to delete a bridge named br0, first bring it down:

Then, to delete the bridge, use the following command:

In our example, the command would be:

There are various modes of network bonding which are as follows:

In this guide, we will setup mode 1 (Active backup mode). We will bond two interfaces, ens33 and ens38. The ens33 will be our active interface, while ens38 will be the backup interface.

First, you will have to install the ifenslave tool on your system. To do so, issue the below command in Terminal:

Then load the kernel module using the below command:

The above command will add additional capabilities to the Linux kernel.

Now, find out your network interfaces. You can use the below command to do so:

Now edit the network interfaces files using the below command in Terminal:

Modify the file as follows:

Make sure to replace the interface’s name with yours. 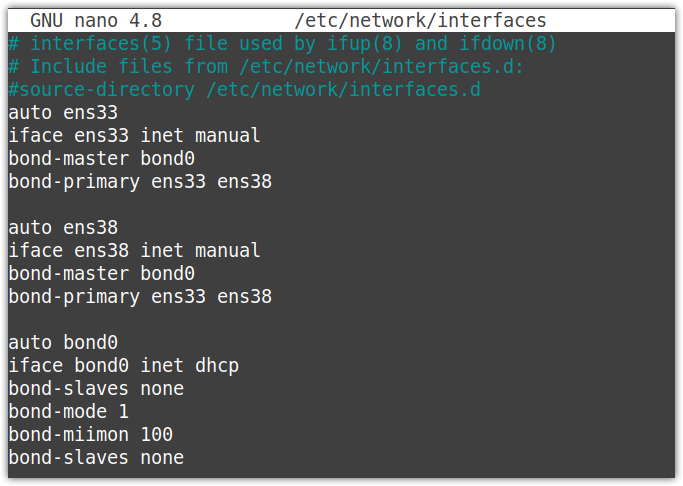 Now save and close the interface configuration file. 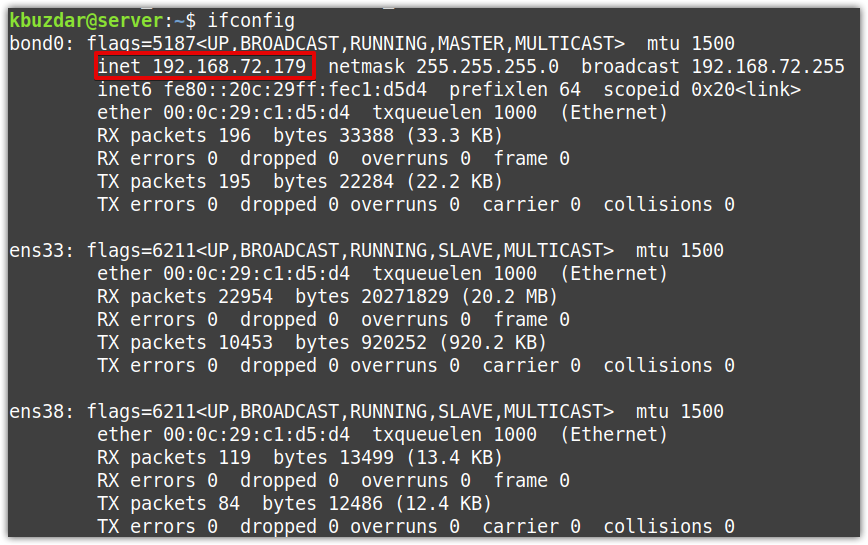 To verify if bonding is working, issue the below command:

The following output shows that the binding mode is active-backup, and both the primary and currently active slave is ens33. 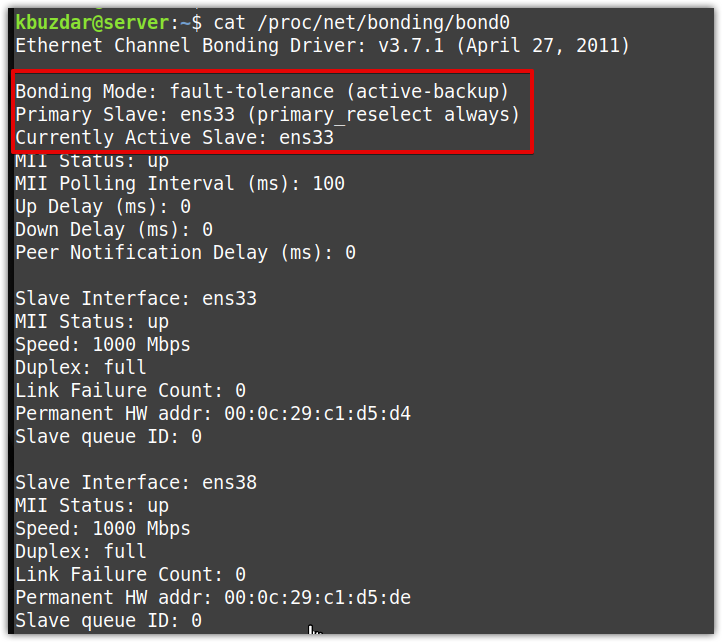 If you run the below command, you can also see that the primary slave ens33 is down while the currently active slave is now ens38. 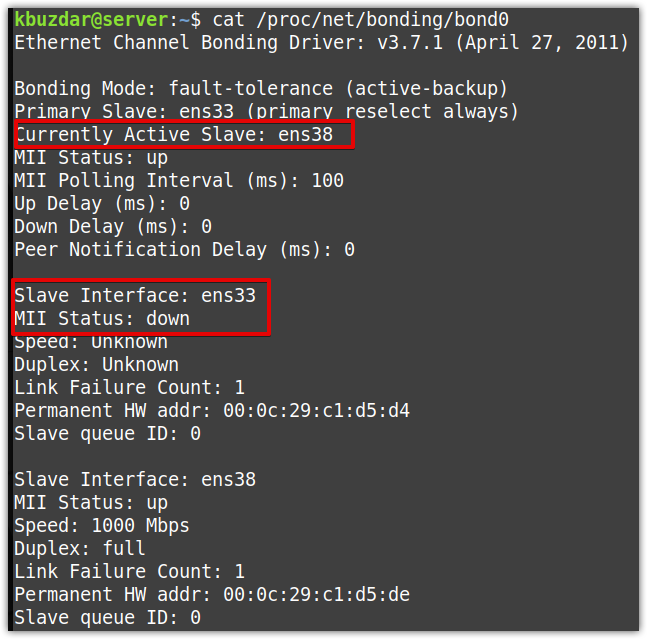 You can also change the active slave interface in bonding using the -c option as follows:

Now to confirm whether the active interface has successfully changed, issue the below command in Terminal:

In the below output, you can see that the active slave interface has changed to ens38.

Now to confirm whether the bonding mode has successfully changed, issue the below command in Terminal:

In the below output, it is clear that the bond mode has changed to round-robin. 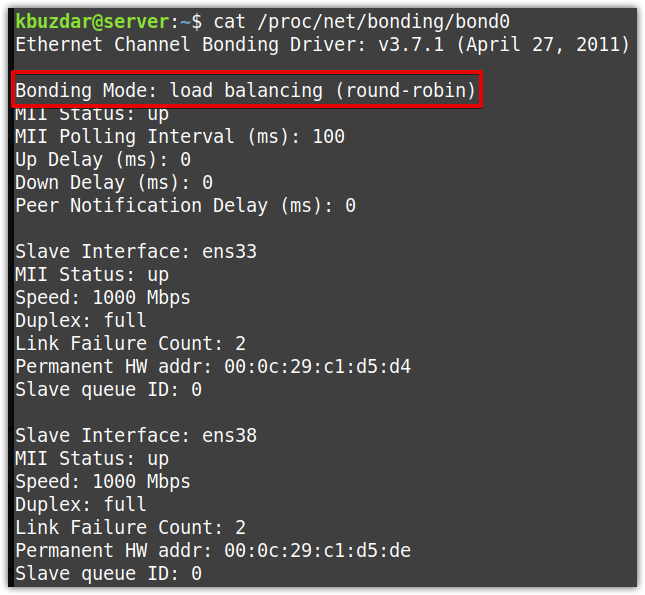 To attach a new slave interface to an already existing bond, use the following syntax:

The -v is used here for verbose output.

For instance, to add a new slave interface ens33 to an already existing bond0, the command would be:

To detach a slave interface from a bond, use the -d option as follows:

The -v is used here for verbose output.

For instance, to detach a slave interface ens33 from bond0, the command would be:

To delete bonding, edit the /etc/network.interfaces file, and remove the configurations related to bonding. Leave only the interfaces configuration like this:

Then save and close the interfaces configurations file.

Now remove the bonding with the below command: