Development of non-android, touch based, handheld Linux devices (mainly mobile phones and tablets) have seen rapid progress in the last couple of years. This can be mainly attributed to the advent of Linux phones like PinePhone and Purism Librem 5. These devices are mostly based on the mainline Linux kernel, with patches and some configuration changes. Desktop environments shipped in major Linux distributions like Ubuntu and Fedora are currently not optimized for small screen touch based devices. This article will list user interface environments that are optimized for mobile and tablet devices based on Linux. Most of these environments are currently in pre-alpha, alpha, and beta stages of development.

“Unity8”, a variation of the Unity desktop environment, was in development for quite a few years. Maintained by Ubuntu’s creator Canonical and based on Qt, Unity8 aimed for convergence where the running desktop environment would automatically and seamlessly adapt for small and large screen devices using responsive, mobile first elements. In other words, Unity8 provided such an interface that any Ubuntu device you carry in your pocket could be converted into a full-blown desktop Linux PC as soon as it was connected to a larger display. Canonical also tried to launch a mobile device with Unity8’s convergence model. Unfortunately, Unity8’s development was stopped by Canonical for various reasons and the device was never released. This same project was then picked up by a group of volunteers and open source enthusiasts. Thus Unity8’s development started again and it became a community project named Ubuntu Touch. Ubuntu Touch is primarily a mobile OS, but it supports convergence and desktop mode as well. Recently, Ubuntu Touch was renamed as “Lomiri”.

Ubuntu Touch supports many ARM based devices and x86 support is also being worked on. It also comes with its own app store containing many useful apps and utilities. If you have a supported device or you want to try Ubuntu Touch on an x86 device, you can download installers from its official website. Image courtesy: Ubuntu Touch website.

Phosh (PHOne SHell) is a desktop environment for Linux based mobile devices. Based on Wayland and the GNOME 3 application stack, Phosh is being developed by Purism, creators of “Librem 5” Linux phone. It can be installed on numerous other Linux devices as well and it has been included in official repositories of Ubuntu since the 20.10 release. It is also available as an installable user interface environment in postmarketOS, a Linux distribution specially tailored for mobile and tablet devices. 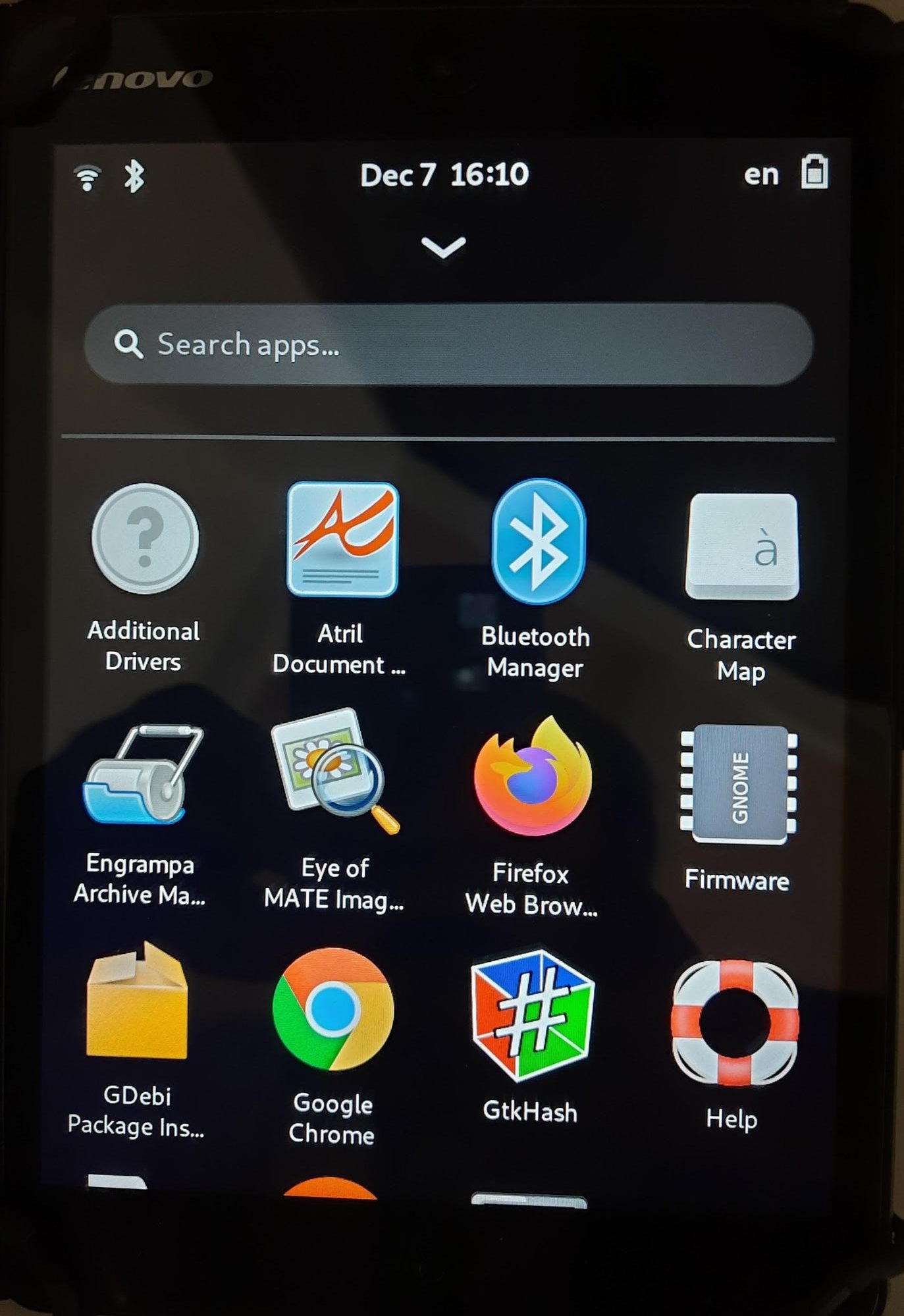 To install Phosh in Ubuntu 20.10, use the command below:

You can also get the source code and compile it for other Linux devices.

Plasma Mobile is KDE’s take on a user interface shell for mobile devices. Numerous mobile friendly applications have been specially designed by KDE developers for the Plasma Mobile project. It combines KWin, Kirigami’s responsive design and Wayland technologies to create a smooth, responsive, and user friendly shell that can be used on mobile and tablet devices alike. Plasma Mobile can run on postmarketOS, Manjaro, Ubuntu and KDE Neon (based on Ubuntu). You can also grab a standalone x86 image based on Neon to run Plasma Mobile as a live session from a bootable USB drive. See all available download options at its official website.

Other Operating Systems for Touch Devices based on x86 Architecture

It is quite rare to find flashable, x86 touchscreen phones today. However, x86 tablets, convertibles and other detachable touchscreen devices are regularly released by hardware manufacturers. If you want to try out a touch friendly, Linux based user interface optimized for small screen tablets, there are a few options you can try out.

There is LibreELEC JeOS (Just enough OS) based on Kodi. JeOS provides a minimal set of command line tools, drivers and utilities just enough to run an application as the main user interface (Kodi in this case). It is similar to kiosk operating systems in many ways and provides support for touch displays, wireless hardware, sound cards, bluetooth units and so on. Kodi has excellent support for touch screen devices, with official user interface themes optimized for touch input. If LibreELEC supports your touch device (you can try it in live mode), you can convert your tablet into a pretty good media consumption device. My x86 tablet works great with LibreELEC and everything works out of the box, except for suspend.

You can also try Lakka JeOS that runs RetroArch emulator as the main application. Retroarch fully supports touchscreen devices and includes numerous presets for onscreen gamepads. Lakka can convert your tablet into a handheld gaming console.

Lastly, you can try Android-x86 that is known to work on a wide variety of x86 devices with some compatibility issues.

Open source software and hardware projects like Ubuntu Touch, Plasma Mobile, Phosh, postmarketOS, Purism Librem 5, PinePhone etc. are currently driving the development of Linux based mobile devices. Most of these projects are currently in development, but they are maturing fast enough and we may see a better ecosystem in future for privacy oriented, open source mobile devices based on Linux.