Like every authentication tool, Kerberos Linux also features an array of commands that every user should know. If you use Kerberos on Linux to authenticate users within your platform, these commands and utilities will always come in handy. Of course, knowing and understanding these commands will make using the Kerberos on a Linux OS a breeze.

The Klist command comes in handy in displaying the details of Kerberos tickets as they are at that particular moment. It can also display the details of a key tab file. The Klist Synopsis is klist [-e] [[-c] [-l] [-A] [-f] [-s] [-a [-n]]] [-k [-t] [-K]] [cache_name | keytab_name] and a ticket will normally look like what is in the following figure:

Using Klist to list entries in the key tab file.

Using Klist to list entries in the credential cache.

The Kerberos Linux command is a File Transfer Protocol. It minimizes the possibility of leaking your passwords, data, and files. Configuring FTP with Kerberos authentication on a Linux platform entails adding a server principal and a user principal as in the following figures:

Using kdestroy to destroy all credentials cache for users.

If you are going to compile and link the programs in Kerberos Linux, this is the utility. It shows the application program what flags should be used for the compilation and installation processes against the installed KBR5 libraries. The synopsis for this command is krb5-config [–help | –all | -version | –vendor | -prefix | –exec-prefix | -defccname | –defktname | -defcktname | –cflags | -libs [libraries]].

An example of a Kerberos installation running in /opt/krb5/ but using the /usr/local/lib/ libraries for the text localization gives the following output:

Justin has put Ken’s Kerberos principal in his k5login file. Ken can use ksu to become Justin in an exchange that would look like the following:

However, Ken’s new ticket would take the shape of the following screenshot and contain Justin’s UID in the filename with “.1” beside it.

The kswitch comes in handy when the cache collection is available. This command transforms the specified cache into a primary cache for collection. It uses the kswitch {-c cachename|-p principal} synopsis.

Ktulil command provides the administrators with an interface to read, write and edit any entries in the key tab files.

The following is an example of a ktulil Linux Kerberos command:

You can effectively use this command to copy one or more files between hosts. These hosts can be a local and a remote host, the same remote host, or between two remote hosts.

Copying a remote file from a remote host to another remote one.

Copying a local file to a remote host.

The rdist Linux Kerberos command helps maintain the similar files in an array of different hosts. It does this while preserving each file’s owner, mode, group, and modified time. Besides, it can occasionally update the running programs.

Copying files to KenHint from src but leaving out those with “.o” extensions.

Indicating the host files due for updating.

This Linux command enables you to log in to the other machines within your network. You can do so using these following steps:

Note that the machine name is the name of the remote machine in your system that you want to log in to.

This command syntax should help you achieve this mission:

The kadmin command is a command-line interface to Kerberos 5 administration system. It enables the maintenance of KBR5 principals, policies, and key tables.

Getting the attributes of a principal. 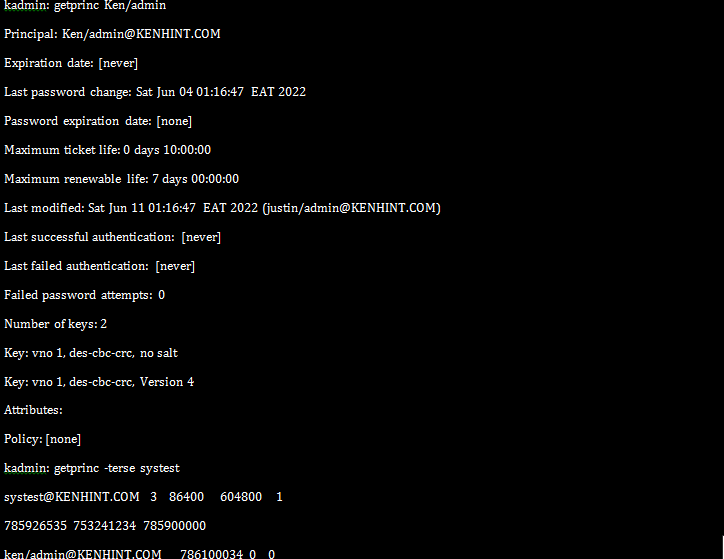 The Kerberos kclient command comes in handy in an array of functions. It can configure a machine to do the kerberized NFS, copy the master files from the specified path names, set up the machines to maps realms, add the principal to a local host, etc.

An example of a Kerberos Client set up using the profile option:

The above Linux Kerberos commands will help you use the Kerberos protocol in a Linux environment more conveniently and securely. We provided the illustrations to make your work a breeze.