This article will list some useful Linux applications that will allow you to create bootable live USB drives by extracting or transferring ISO image files of various Linux distributions. Live mode allows users to run and experience a full Linux desktop along with all of its applications without actually installing the OS. You can also create persistent live bootable USB drives that will allow you to permanently store changes made in a live session. Creating persistent storage for live mode won’t be covered in this article as it is a complex and lengthy topic that needs to be covered in a separate article.

Startup Disk Creator, as the name suggests, is an application for creating “startup disks” or “bootable disks” that can be run in live mode. This application ships by default in Ubuntu and some of its variants. The process for creating a new bootable drive using Startup Disk Creator is pretty straight forward: you have to launch the application, select the ISO image, select the USB drive and then have to click on the “Make Startup Disk” button. The process may take some to finish, depending on the read / write speeds of the external drive and size of the ISO image. Note that all data on the external drive will be wiped out during creation of the bootable drive. 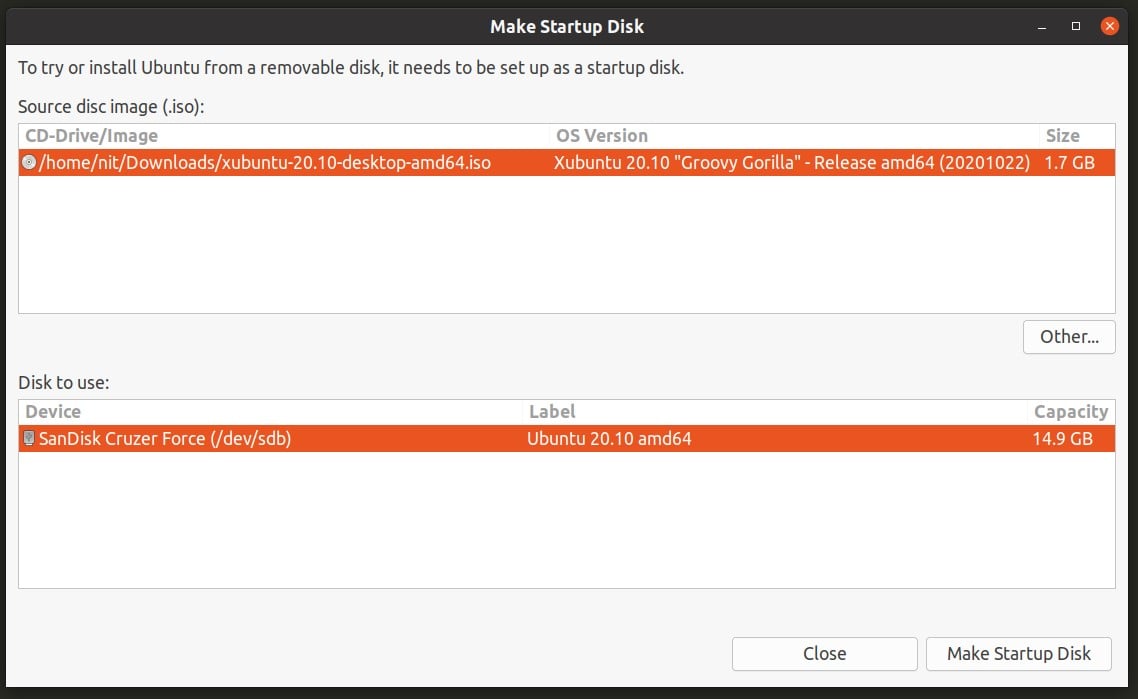 In case Startup Disk Creator is not installed by default on your Ubuntu system, you can install it by running the command mentioned below:

If you are using Kubuntu or other Ubuntu derivatives using KDE as the default desktop environment, you can use the KDE variant instead:

Etcher or balenaEtcher is a cross platform and open source application that can be used to flash ISO images of various Linux distributions. Created using technologies like Electron and TypeScript, Etcher can verify contents of external drives after flashing to ensure that these drives work properly on the next boot. Etcher features a minimalistic interface without much clutter. 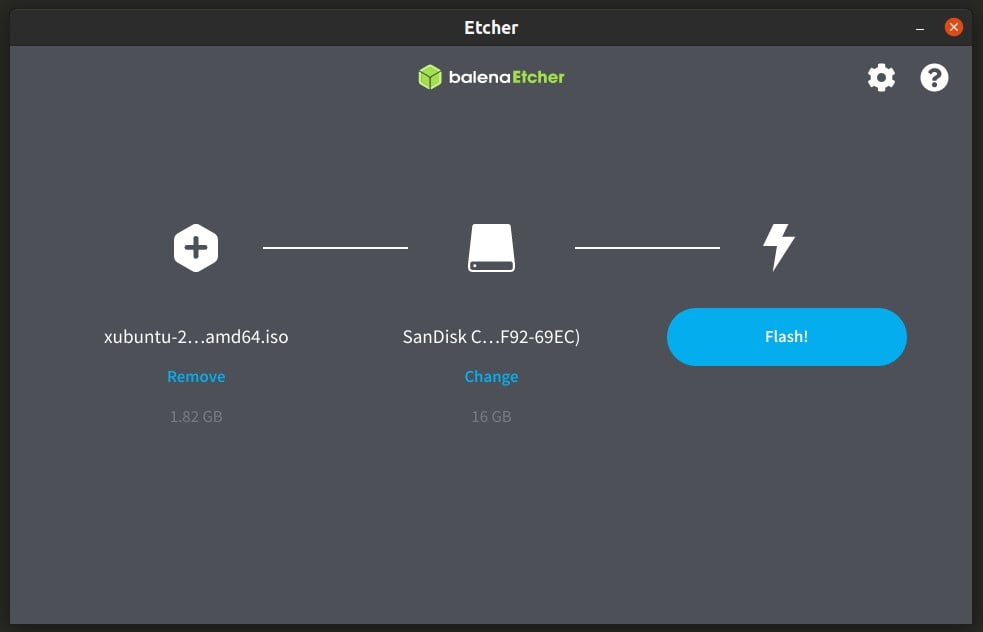 You can download the Etcher “AppImage” executable file that can be used on all major Linux distributions from here. Other installable packages are also available on the same page.

UNetbootin is an open source software that allows you to create bootable external drives from ISO images of various Linux distributions. It can also download ISO images directly from the application itself. UNetbootin uses a different approach than other applications mentioned in this article. It extracts the contents of the ISO image to external drives along with some other files needed to make these USB drives bootable. This method is especially useful if you want to copy some files to a USB drive once it has been made bootable. Other apps mentioned in the article may make “read-only” drives from ISO images of certain Linux distributions (Ubuntu for example). 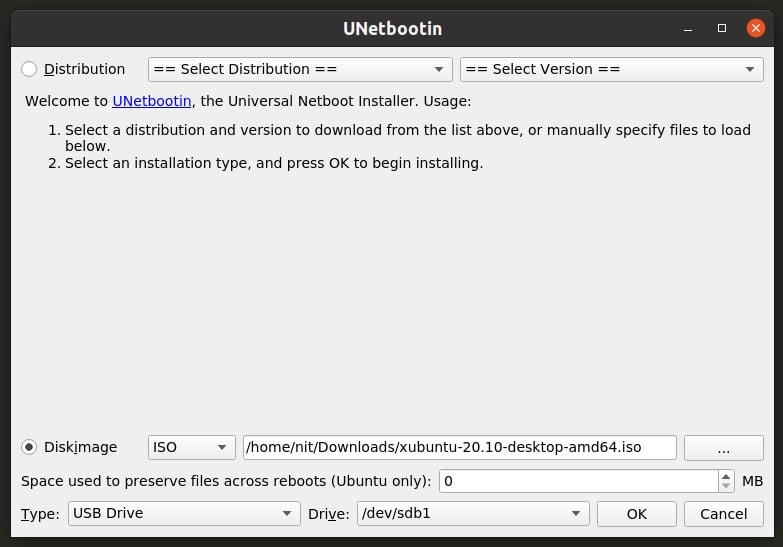 You can download the UNetbootin executable binary that can be used on all Linux distributions from here.

Note that UNetbootin shows an option to reserve space for persistent storage, but it didn’t work in my testing.

DD command can copy and convert files on Linux systems. You can use it to transfer files on any connected storage drive, internal or external. DD command is commonly used to copy ISO image files and create bootable USB disks. DD command is available by default on all major Linux distributions.

To create a bootable live USB disk by using DD command, first you have to find out the identifier for your external drive. You can do so by running the command below:

Once you have the identifier for your external drive, run the command below by replacing “/dev/sdX” with the identifier you found in the step above (also change the path to ISO image file). Be extra careful when supplying the identifier, you don’t want to wipe out a wrong storage drive.

Wait for the process to finish, then safely remove the drive from the file manager. 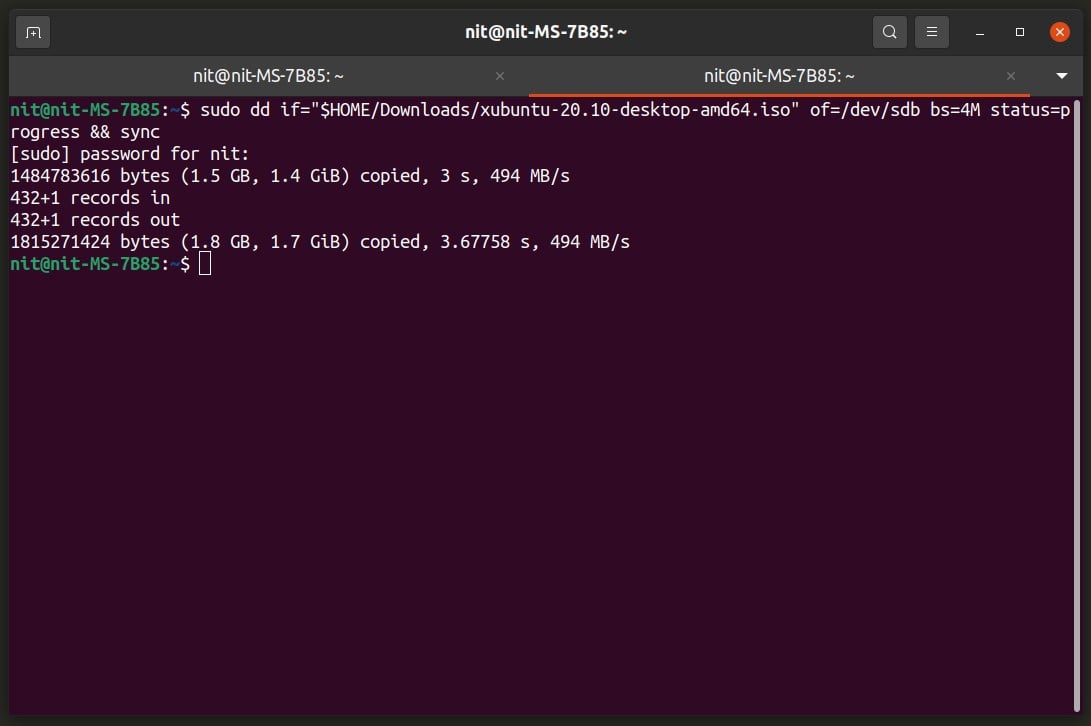 These are some of the tried and tested methods to reliably create bootable live USB drives. These methods do not create persistent drives where all changes made in a live session are stored and saved just like on a full installation. Creating persistent drive is a bit complex process and a separate topic altogether.