How to Use Less Than or Equal Operators in R Programming Language in Ubuntu 20.04?

A relation operator describes the relationship between two values or the comparison of two values or operands. ( <= ) Less than or Equal to is the combination of two relational operators (“<” and “=”) with an OR operator between them, so it will give an output of true whenever the condition is satisfied.

These operands can be numerical values, characters, vectors, and matrices.

In the following example, we will try to demonstrate in how many ways and for what reasons you can use the less than or equal operator in R.

In this instance, we will take two values as operands. The first operand will be equated to the second operand to see if it is less than or equal to it or not. Let’s create two variables and assign a numeric value to them.

We have specified a= 10 and b =20. As this will create an expression 10<=20, it will return true because it doesn’t matter whether “a” is equal to b or not, but b is less than a. So, the condition is satisfied.

In the overhead case, the value of “a” is neither less nor equal to b. The expression we will get 30<=20 is false.

As in both variables, the characters are the same, i.e., “computer.” It will generate an expression of “computer”<=” computer,” which is true.

In the above case, a is not equal to b (comp is not equal to computer). However, the <= operator will calculate each letter and determines that a<b, so the output will be TRUE.

The value of “a” is specified as “mouse” and b as “computer.” Both of the characters are entirely different; the condition will not satisfy them. It will give a FALSE output.

In this example, we will create two vectors to determine the less than or equal relationship between them. Let’s try with the vectors of the same length first.

As you can see, it is comparing the first three corresponding elements of both vectors and giving the output “false” for the missing values. So, if we use vectors or matrices of different lengths, it will show a warning message on the console.

Let’s take two matrices as operands to check the relationship between them by using the <= operator. The dimension of both matrices must be similar. Otherwise, the R console will show a warning message.

The <= operator will compare each element in matrix 1 with each corresponding element of matrix m2. As you can see in elements 1 and 4, the condition is satisfied and false at the 2nd and 3rd elements.

Example # 4: (<=) operator in if-statement and if-else statement in R

The <= can be used in if-statement for creating different applications. Let’s write a program to determine if a number is less than or equal to 11. For this, we will create a numeric variable first. In the if-statement, we will write our condition using the <= operator.

Let’s try the same above example with the if-else statement. 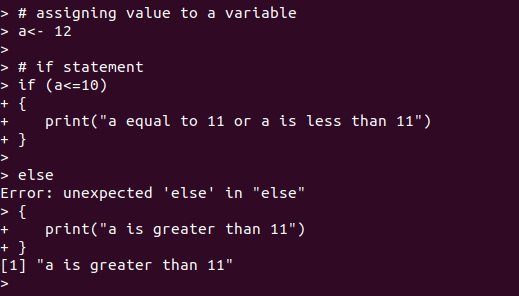 The <= operator can also be used for creating a condition inside a while loop. Let’s create a program to print the first five positive integers using a while loop. 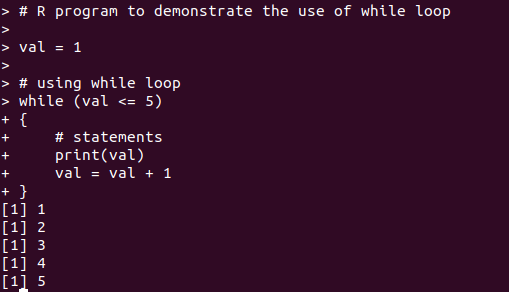 The variable value is set to 1 at the start. The condition is verified, and the value of val is printed in each iteration of the while loop, after which it is incremented until it reaches 5 and the condition is false, at which point the loop is ended.

In this tutorial, we have seen that (the less than and equal to”<=”) is an operator that can be used in conditions to make the comparison between two operands. Now you should be able to use this operator in different applications in the R programming language. We implemented different examples to teach you how to use the <= operator with different data types in R. We have also seen that it can be very useful in if-statement, if-else statements, and while loops in R.