We want a Kubernetes cluster, and we need to configure the kubectl command-line tool to interconnect with the cluster. We recommend running this tutorial in a cluster with two or more nodes that do not host the control plane. If we don’t contain a cluster, we build one by the use of the Minikube. Most containerized applications processing on Kubernetes require access to exterior resources. Exterior resources typically need a secret, password, key, or token to access. With Kubernetes Secrets, we can safely save these objects, so we don’t have to save them in the pod definition.

Secrets are secure objects that save confidential information. We can utilize secrets to switch how that complex information is utilized and diminish the risk of data disclosure to illegal users. We also utilize the keys managed by the Cloud KMS to encode the secrets at the application level.

The secret can be created individually of the pod we are using, reducing the risk of the secret and its information being visible through the pod creation, observation, and insertion of pods. Kubernetes and applications running in a cluster may also utilize secrets to take further precautions, such as preventing sensitive data from being written to non-volatile memory. The secret is similar to ConfigMaps; however, it is specially designed to store sensitive data.

By default, Kubernetes secrets are saved unencrypted in the original data of the API server (etcd). Anybody who acquires etcd and anybody who has API access may get or change the secret. In addition, anybody with permission to build a pod in a namespace utilizes this to deliver the secret in that namespace. This contains unintended access, such as the capability to build deployments.

After installing the Minikube cluster, we started the Ubuntu 20.04. Now, we have to open a console to run the commands. For this purpose, we press “Ctrl+Alt+T” altogether on the keyboard.

In the terminal, we write the command “start minikube”. After this, we wait a while until it effectively starts. The output of this command is provided underneath:

When we create a secret, we can state its type by using the Secret Resource’s Type field or, if obtainable, the specific kubectl command line. Secret types are utilized to help the program processing of various types of sensitive data.

Kubernetes offers some built-in kinds for certain common usage states. These categories differ in the validation executed and the restrictions Kubernetes enforces on them.

Opaque is the default secret type. When using kubectl to build a secret, utilize the generic command to specify the opaque secret type.

SECRET_TYPE: This  type of the secret can be one of the following:

We utilize generic types for most secrets.

We build a secret using the Kubernetes Administrator command-line tool, which is  kubectl. With this tool, we can utilize files, pass literal strings from the confined computer, wrap them in secret, and utilize the API to build items on the cluster server. It’s essential to note that secret objects need to be in the usage of DNS subdomain names:

By default, the kubectl get command ignores displaying the contents of the secret. This is to prevent the secret from being accidentally disclosed or saved in the terminal log.

In this output, the “DATA” column demonstrates the quantity of data elements saved in the secret. In this instance, 0 shows that we have built an empty secret:

The secret can be provided as a data volume or as an environment variable utilized by the container in the pod. The secret can also be utilized in further measures of the system without being exposed straight to the pod.

We can edit the current secret with the “kubectl edit secrets secret1” command.

Setting the Kubernetes Secret in the Configuration File: 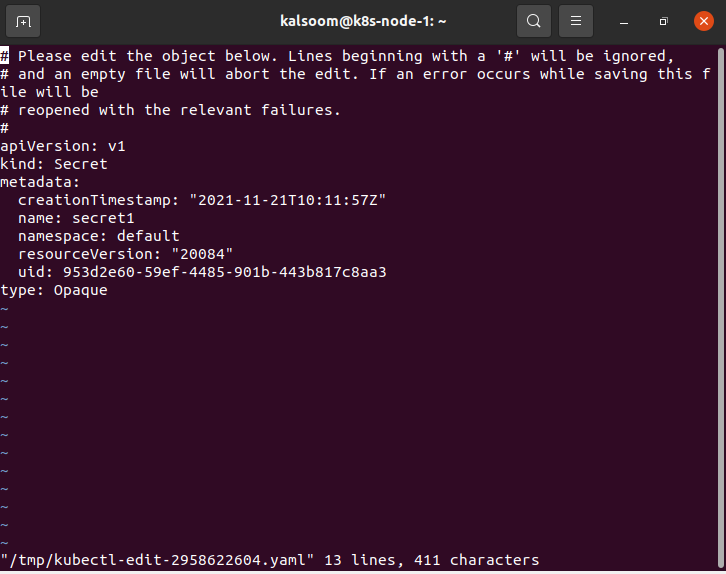 In this guide, we learned about the secret. A secret is a thing that holds confidential information. And then, we have discussed the method of how kubectl updates Kubernetes secret.
Keeping the secrets safe is important for running containers in Kubernetes, as almost every application needs access to external resources. Kubernetes secrets let to achieve complex data in the cluster and reduce the risk of distributed confidentiality. We hope you found this article helpful. Check out Linux Hint for more tips and information.