For the past couple of years, Kubernetes has been heavily employed in production. Its declarative API provides a variety of options for orchestrating the containers. One of Kubernetes’ most notable features is its resiliency, which includes the ability to do Rolling and Rollback Deployments. When it comes to putting apps into operation, there are various options. Rolling updates are the default approach for updating the running version of your application in Kubernetes.

The rolling update periodically removes older Pods and replaces them with newer Pods. You can change the images, settings, labels, annotation, and resource restrictions of the workload in your clusters using a rolling update. Rolling updates start replacing your resource’s Pods with new stuff, which are then planned on nodes when resources are needed. Rolling updates are built to maintain your workloads updated without causing any disruption.

Kubernetes and kubectl provide a straightforward mechanism for rolling back resource modifications. When a Deployment is not secure, such as when it crashes looping, you also might want to roll back the Deployment. By default, the system saves all of the Deployment’s rollout history so that you might roll back at any moment. In this guide, we are going to talk over the method to roll back a kubectl.

Method to Roll Back a Kubectl

We have installed kubectl as well for the effective implementation of this tutorial.

A Deployment is a Kubernetes entity that is used to declaratively manage Pods using ReplicaSets. It has functionality for updates, control, and rollback. This implies you can upgrade or downgrade a program without causing a user blackout, and also roll back to the previous if the current version is unreliable or full of issues. Deployment can also use a declarative management style to obtain optimal states of an application stated in a YAML file to live. We will design a Deployment that will create a ReplicaSet that will set up 3 Nginx Pod instances. You will need a Kubernetes cluster up and operating, as well as the kubectl command-line tool setup and linked to it. Using the command prompt, create a YAML manifest file titled “deployment1.yaml” by using the “touch” command.

The file will be generated in the home directory. Now, we have to add some information regarding deployment in the created file. 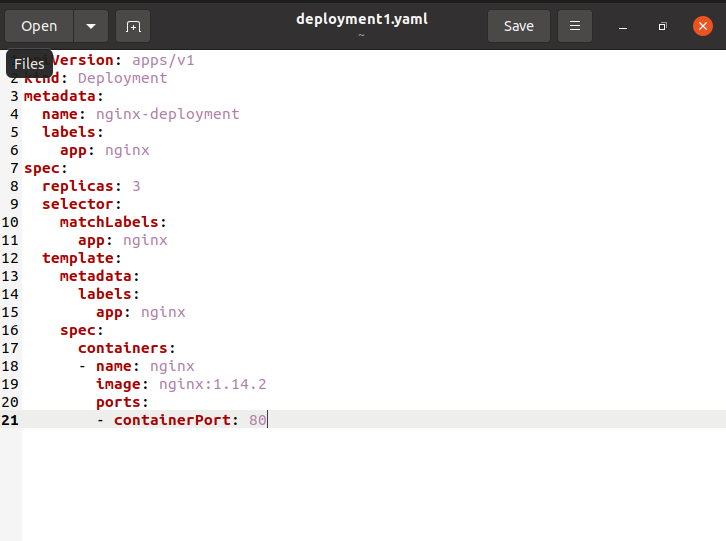 The output is showing that deployment has been generated effectively in the above-attached screenshot. Verify the status of the deployment to perceive if it has been formed. Execute the listed below command in the console.

If you get an output like this, it signifies the Deployment is still in the process of being generated. Wait a few seconds before rerunning the kubectl get command. This is what the ultimate result will appear like after it has been ended.

Execute kubectl to get rs to view the ReplicaSet (rs) established by the Deployment. The subsequently displayed image is a sample of the output:

This article has provided in-depth knowledge regarding the importance of kubectl rollback. We have given an example of deployment rollback to clarify our reader’s reading roll back the process.