HashMap in Kotlin is a collection that includes object pairings. The MutableMap interface is implemented in Kotlin using a Hash Table. It saves data as a key-value pair. Map keys are unique, and each key has just one value in the map. HashMap<key, value> of HashMap<K, V> are the two ways to describe it. In the article, we will discuss the HashMap features in Kotlin. HashMap is faster since it accesses the values using unique keys. It associates each value with a key, allowing us to get these values more quickly over iteration.

What are the Constructors of HashMap in Kotlin?

HashMap in Kotlin has four constructors, each with a public access modifier:

How to Use the HashMap in Kotlin

To understand the basics of using the HashMap in Kotlin language, we have different examples given below:

We have a simple HashMap class example that starts with an empty HashMap of type Int, String and adds entries afterward. HashMap[key] or HashMap.get will be used to output the value of HashMap (key). 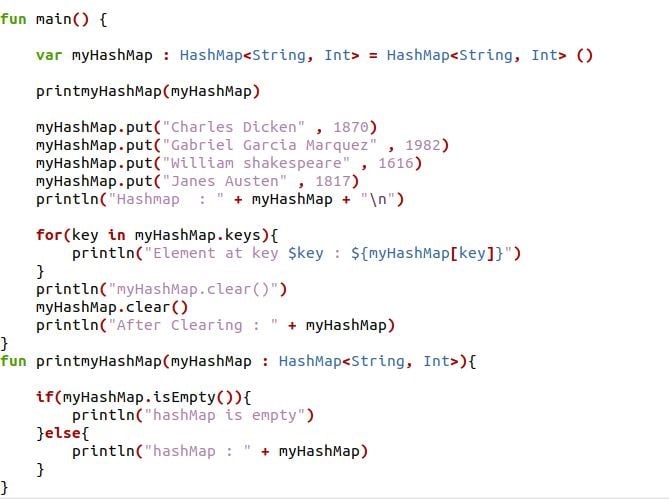 The output of the empty HashMap, added elements in the HashMap, and the elements of the key are shown on the terminal screen.

Example # 2: Program of Using a hashmap. size() and Initial Capacity Function in Kotlin:

We have set the initial capacity of a HashMap in the example. By adding and removing elements, the capacity of its elements can be modified. 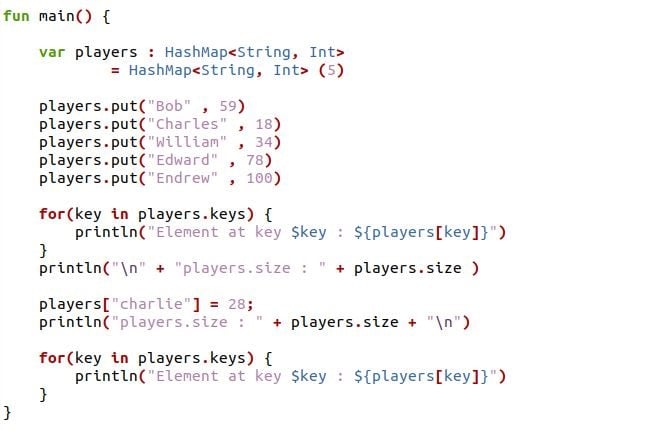 The output of HashMap of initial capacity and the output after modifying the HashMap is displayed in the image below.

Example # 3: Program of Using a hashmap.replace() Function in Kotlin: 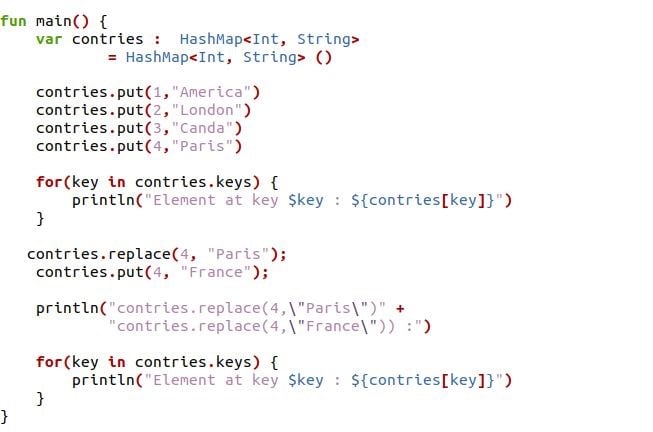 In the above instance, we have declared the main function. We have created a variable represented as “val” and named it as “countries”. The variable “countries” have a HashMap function of type property Int and String. Initially, the HashMap is empty. We added the elements in the HashMap by calling the put() function. We have put four “Int” elements and “String” elements in the HashMap. Through the HashMap, elements will be printed by using “countries[keys]”. After printing the HashMap elements, we have used replace() function for variable “countries” and passed an “Int” Value and “String” Value which will be replaced. Then by using the put() function, we have added the element with the replaced element. The replaced elements and the added elements will be printed by using the Kotlin overload print function. In the end, we printed the HashMap by using HashMap[key] which holds the single element of each key.