Tmux is an open-source terminal multiplexer application for efficiently managing multiple terminal windows. People who have previously used the Terminator application are mostly familiar with the notion of tab management in Linux Terminal. With Tmux, we can split the terminal into a number of panes. We can adjust these panes by moving around, resizing and switching between them. This helps in curbing the pain of managing multiple windows and tabs of Gnome terminal.

In general, when you close a SSH connection, the corresponding remote terminal sessions are also closed. Here comes the Tmux for help as it preserves those sessions when the SSH connection is terminated.

After installing Tmux, you will not find any icon associated with it. It will not appear as a separate application, instead we will have to invoke it from the Gnome Terminal itself. We will later see how to do this.

Note: In this ‘HowTo’ we have used the ‘Ctrl+b’ as the prefix, if you configured some other prefix then replace the command with your prefix.

In this guide, we are going to see how we can install Tmux and more specifically “How to kill all Tmux sessions”. We will use Ubuntu 20.04 as the base system for this guide. Let us first start with the installation of Tmux.

Major operating systems like Linux, MacOS and Windows Subsystem for Linux (WSL) provide Tmux software packages from their official repository. To install Tmux on Ubuntu 20.04, we can simply use the package manager or Software center as described below:

To overcome this error, type “export TERM=xterm” on the terminal and hit enter. Now again run the ‘tmux’ command and this time the error should not appear.

We can use three ways to send commands to a Tmux terminal.

Using the Prefix keys: Tmux uses a combination of keys called prefix key, which is by default ‘CTRL+b’. This prefix is followed by one or two more keys which will be interpreted by Tmux for a particular operation. For example, we can detach from a session by using: [Prefix+d].

Using the command line: Tmux commands can also be used from the non-Tmux terminal or shell prompt. These commands are preceded by the ‘tmux’ keyword. We have illustrated this method in the below section.

In the simplest way, we can type ‘exit’ or enter ‘Ctrl+d’ to destroy a Tmux session. The ‘kill-session’ command can also be used to destroy a session:

When we run the ‘tmux ls’ command, the following message will appear if there is no running session:

We can also kill all running sessions simultaneously. Running the below command will kill all the sessions including the one from which we execute it:

Excluding a Session from Termination

In case you want to keep the session you are in and kill all the other sessions, run the command: 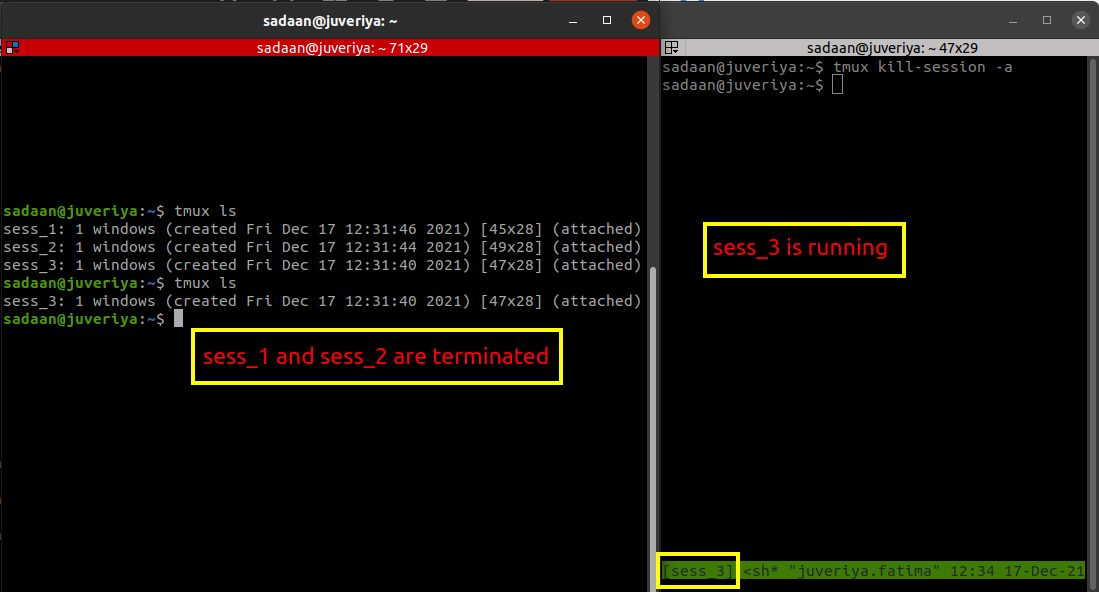 This will kill all the sessions excluding the current session from which we are running the ‘kill’ command. In our case, ‘sess_3’ is running and others are terminated.

We can also choose a session to kill, for this run the below command to identify the target session:

Now, use the command ‘tmux kill-session -t sessionIDorName’ to kill a specific session. For example, we want to kill the session ‘sess_3’, in this case this command will be: 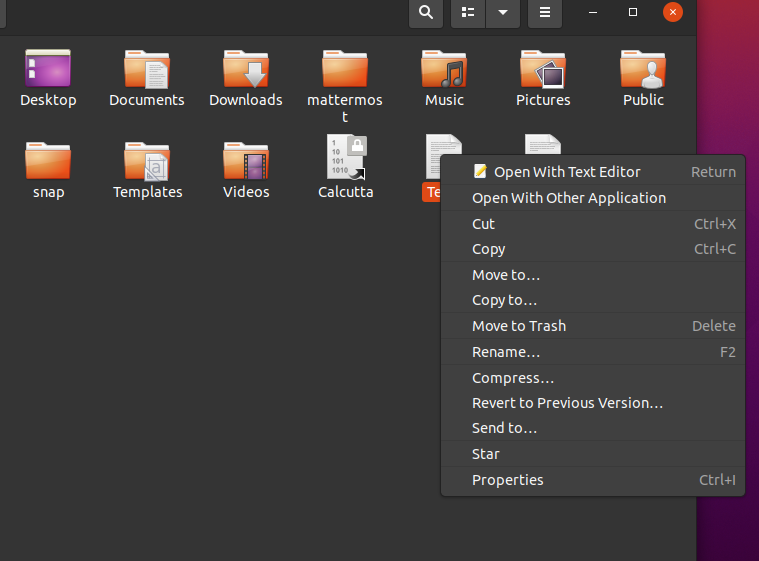 Using this method, we can terminate the entire Tmux process tree. Open the System Monitor application and search for ‘tmux’ inside the process tab. This will list all the Tmux running processes. In our case, we have three Tmux sessions. There are three client processes and one server process running as shown below: 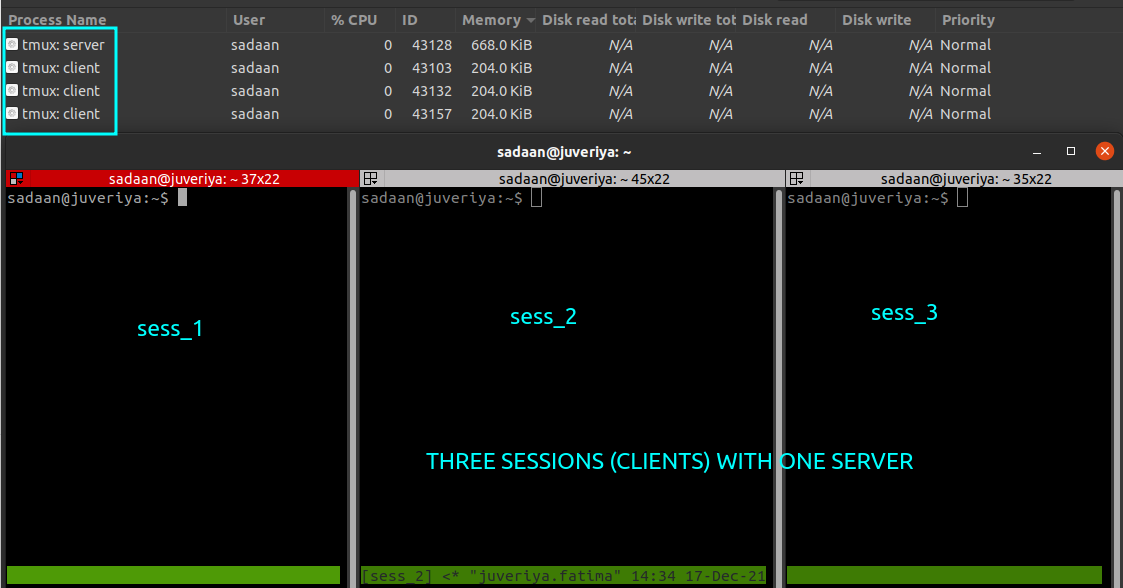 Now, run the below command to terminate all sessions:

All the tmux processes (clients and server) are terminated as shown below:

In this guide, we have learned about the installation of Tmux, its basics and more specifically, “How to kill all tmux sessions”. A more detailed explanation of various Tmux operations can be found on the Tmux Man pages or on the Github page of Tmux.