Have you been in situations where you press keyboard keys simultaneously but some keys don’t appear on the screen? If you think your keyboard is malfunctioning and you’re on the way out to shop for a replacement, hold yourself. Your keyboard may still be working fine. You may simply be experiencing keyboard ghosting.

Keyboard ghosting is when you press a key on your keyboard but there isn’t any response. This does not normally happen if you press just one key at a time. When you press two to four keys altogether however, like when you’re playing games, the last key might not register; an instance that can be annoying especially for gamers. This usually happens on membrane keyboards or on keyboards that are made of poor-quality hardware.

You might be wondering, if the keyboard is working just fine, why does ghosting occur?

The keyboard keys have switches underneath them and the switches are arranged in grids of columns and rows. Beneath each key is an intersection of a column and a row. When a key is pressed, the decoder sends a signal down the column where the key belongs and then checks each row to detect a signal. Since there’s only one key pressed, there’s only one contact point made on the keyboard, and the output appears on the screen. There still won’t be any issue if you press two keys belonging to two different columns or two keys belonging to the same column. In those cases, there will be two different rows connected to each column and you’ll still see the outputs on the screen. However, the keyboard starts to get confused when three or more keys are pressed that share a column and a row such as in the example below. 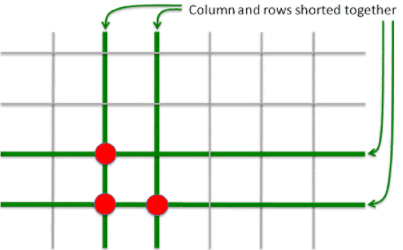 The decoder checks the column-row connection. If a set of keystrokes produce a pattern that shares columns and rows, the pattern becomes indistinguishable to the keyboard. In the example above, the three-point contact connects the right column to the other column. There are five other different sets of keystrokes that would produce similar patterns of two columns connected to two rows leading to the keyboard’s confusion. When the keyboard gets confused with the patterns, it will stop sending out signals so as not to produce a wrong key, and thus you won’t see the character you typed appear on the screen, or the key is “ghosted”. In some cases, the keyboard does send out a character that you didn’t press as a product of its confusion. This extra character is also called the ghost key, since no one pressed it but it appeared on the screen.

Gamers normally experience keyboard ghosting the most since they have to use a number of key combinations to execute their gaming actions. Running, jumping, and shooting as well as dual-player games will require key combinations that an ordinary keyboard won’t be able to handle. That’s why we see keyboards especially designed for gaming. Gaming keyboards are usually marketed as Anti-ghosting, X-key rollover, or N-key rollover keyboards.

One robust key rollover variety is the N-key rollover (NKRO) where N signifies an unlimited number of keys that can be pressed and reported at once. You can press any number of key combinations and the possibility of ghosting is zero. This is usually found in high-end gaming keyboards which are generally more expensive than the regular membrane keyboards and anti-ghosting keyboards. This is because of the extra wires added to the circuitry of the keyboard to remove indistinguishable patterns. Some manufacturers use diodes beneath each key to mitigate keyboard ghosting.

There are several simple tests for keyboard ghosting. For one, you can open up a text document editor or a word processing application and type different sets of 2-6 keys simultaneously. Use different patterns of keystrokes. Remember, not all patterns are indistinguishable. If any of the keys do not appear, then your keyboard belongs to the regular ones. Similarly, you can use an onscreen keyboard and do the same testing process. The keys will be highlighted when pressed. Look out for keys that do not highlight when you press the keys simultaneously. You may also use Microsoft’s keyboard ghosting test here, which works the same way as the onscreen keyboard test.

Keyboards are an essential part of any computer task. However, tasks that include pressing more than two keys might impose keyboard ghosting if you’re using inexpensive membrane or mechanical types. If you’re fond of gaming and you don’t want your keyboard to hinder your way of winning or a typist whose task requires pressing more than three keys most of the time, investing in more expensive Anti-ghosting or N-key Rollover keyboards would more than meet your needs.