A penetration tester can quickly set up a Kali Linux instance on the Amazon Cloud and access it at any time for any kind of penetration test. This is because, there is a readily available Amazon Machine Image (AMI) that runs Kali Linux on the Amazon Marketplace.This article is an excerpt taken from the book by Packt Publishing titled, Hands-On AWS Penetration Testing with Kali Linux written by Karl Gilbert and Benjamin Caudill. This book will help pentesters as well as seasoned system administrators with a hands-on approach to pentesting the various cloud services provided by Amazon through AWS using Kali Linux.

AWS provides a fascinating feature that allows for the rapid deployment of Virtual Machines (VMs) on the Amazon Cloud—Amazon Machine Images (AMIs). These act as templates and allow one to quickly set up a new VM on AWS without going through the unnecessary hassle of manually configuring hardware and software like on traditional VMs. However, the most useful feature here is that AMIs allow you to bypass the OS installation process entirely. As a result, the total amount of time needed to decide what OS is required and to get a fully functioning VM on the cloud is reduced to a few minutes—and a few clicks.

The Kali Linux AMI was added to the AWS store pretty recently, and we shall leverage it to quickly set up our Kali VM on the Amazon Cloud. Setting up a Kali instance using the ready-made AMI is pretty simple—we start by accessing the Kali Linux AMI from the AWS Marketplace: 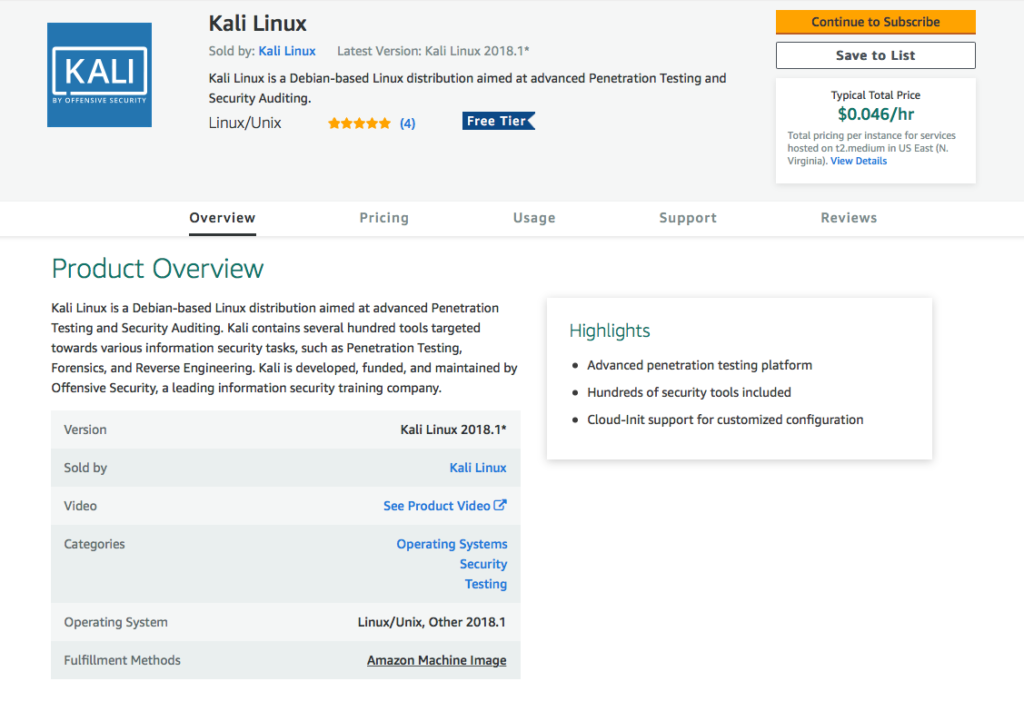 It is useful to note that the default recommended instance size for Kali Linux is t2.medium, as we can see under pricing information:

Further down the page, we can see that the size of the t2.medium instance consists of two CPU virtual cores and 4GiB RAM, which is more than enough for our setup: 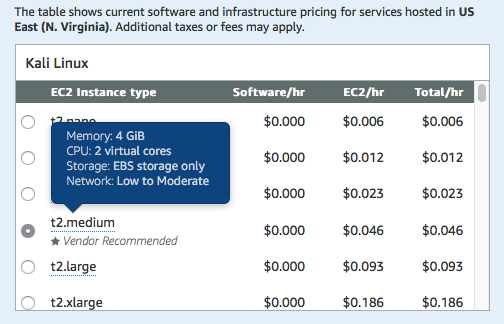 Once we have confirmed that we’re setting up the image according to our requirements, we can go ahead and click on the Continue to Subscribe option to proceed with our instance.

In the previous section, we confirmed the AMI we are going to use along with the specifications of the machine we will be using to launch our Kali machine. Once that has been selected it is time to launch our machine.

This brings us to the Launch on EC2 page. This contains some options that need to be set:

Since 2019.1 is released now you need to download the latest version of Kali linux

AWS already sets a default form of SSH access for their Kali AMI with an ec2-user account using a public key. However, this isn’t convenient for access via a mobile device. For users who want to conveniently SSH into their Kali instances from mobile applications directly with root privileges, the following section walks through the process. It should be noted, however, that using a limited user account with PKI authentication is the most secure way to connect over SSH, and using a root account with a password is not recommended if securing the instance is a priority.

The very first step of configuring root SSH on a Kali Linux instance is to set the root password. The root account usually doesn’t have a password set for ec2 instances that are using an ec2-user account that has sudo privileges. However, since we are setting up SSH access from mobile SSH applications, this needs to be set. It should be noted, however, that this comes with a reduction in the security stance of the Kali instance.

Changing the root password is as simple as running sudo passwd on the SSH terminal:

Similarly, the password of the current user can also be changed by running sudo passwd ec2-user over SSH:

This will be helpful in SSH-ing as ec2-user from an SSH client application that doesn’t support authentication keys. However, another step remains before we can SSH into the Kali instance as root.

As an enhanced security measure, OpenSSH server comes with root login disabled by default. Enabling this is a straightforward process and involves editing a configuration file, /etc/ssh/sshd_config:

The critical parts of this are the two entries:

Once you are done performing the changes, you will need to restart the ssh service:

With that, our Kali Machine on the cloud is up and running and can be accessed over SSH using a password. However, SSH only gives you a command line interface.

To further know how to set up a remote desktop service to get GUI access to our Kali Machine, you can check out the book, Hands-On AWS Penetration Testing with Kali Linux.

Benjamin is an adept cybersecurity professional, researcher, and entrepreneur. A veteran of the defense and aerospace industry, Benjamin led investigations into advanced cyberattacks, coordinating with federal intelligence communities on complex engagements. As Founder and CEO of Rhino Security Labs, Benjamin has built the boutique security firm and turned it into a major player in the penetration testing market. In addition to his executive role, Benjamin oversees company research and development, ensuring the continued development of key offensive technologies.