JSON and XML play a vital role in order to organize data into a readable and understandable format in several languages like Python, Ruby, JavaScript, and APIs. Organizing data is very essential to share data successfully. Notwithstanding, they have similar objectives but distinctive ways to work.

In this article, we first go through the features of JSON and XML, then compare them in-depth to completely comprehend their advantages, and then briefly discuss why they remain on inverse sides.

JSON is an abbreviation of JavaScript Object Notation. JSON uses readable texts to store and transmit data comprising arrays and attribute pair values. JSON text can be easily converted to an object of JavaScript within JSON and then sent to the server. It is based upon JavaScript and is efficiently used with numerous programming languages. Following are the features of JSON:

Example
Below is the example to show the JSON format. This example stores information related to students along with their registration number.

After understanding the format of JSON, you can easily write JSON within JavaScript and save the file as filename.html.

Output of above code: 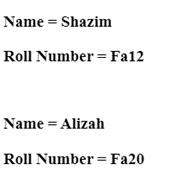 XML is an extensive markup language and created to carry data. It defines some standard set of rules in order to encode files in a readable format. The aim to design this XML is to focus on simplicity and usability over the internet. It is strongly supportable through Unicode. It is one of the most widely used languages to represent arbitrary structures of data. Features of XML are enlisted below:

Example
XML code can be represented as follows:

Output of above code: 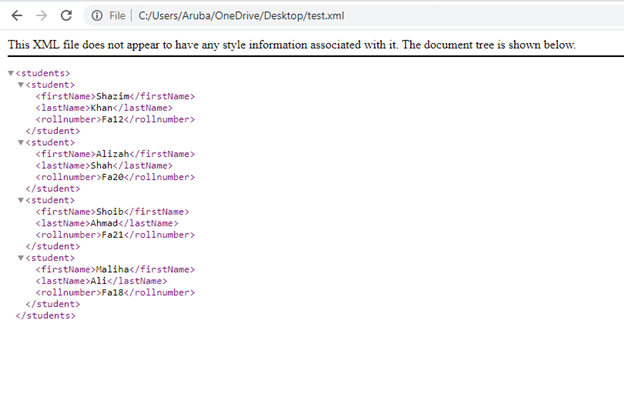 As discussed above, JSON is a JavaScript Object Notation to format data whereas XML is a markup language. The key difference between JSON and XML is that JSON has a smaller file size and efficiently transmits data to the web as compared to XML. JSON accesses data through JSON objects whereas XML needs data to be parsed. JSON is easily readable as it has a more organized structure of code. On the other hand, XML is difficult to interpret due to its complex structure.

Although JSON versus XML isn’t completely comparable. JSON is good for transferring data as it does not require processing whereas XML can be complex as it not only enables data to transmit but also to process and format files. JSON is least secure in contrast to XML. JSON is unable to support namespaces but is capable of fully supporting the toolkit of Ajax. On Contrary, XML supports namespaces but is unable to support Ajax toolkits.

JSON is the best choice to transmit small and simple data sets. Both XML and JSON allow sharing data in programming languages. Although XML is old and complex, it defines some standard rules in order to transfer data and produce files that are readable to both humans and computers.

In contrast, JSON is a modern way to organize data into a readable format. JSON stands out for its faster manipulation of files whereas XML is favored due to its data structure.

As you can see, both have different aspects in terms of representation, the structure of data as well as security. After analyzing key differences between JSON and XML, it concludes that JSON is a much faster and easier approach to structure data and transfer it. On the other hand, XML also plays a vital role in data storage.