Javascript is the most known language of the web. Javascript is widely used in front-end development as well as in the back-end. Javascript provides a lot of built-in functions to help in development. In this article, we are going to learn one of the javascript’s built-in alert() method, which is used to show pop-ups over the screen to either display a message or show a warning. The alert box is different from any other message or text on the screen. It is a pop-up that contains a message/text with an “OK” button. The user won’t be able to do any task while an alert box is over the screen, and he/she clicks the “OK” button. So, it is not recommended, if not needed. So, let’s have a look at what is an alert box and what are the different ways to use it.

The alert() is basically a method, which is used to show a pop-up box over the web page.

There are two different syntaxes for showing the alert box. One of them is using the window’s object.

But, we can use the alert() method without the window’s object as well.

So, let’s try both of the syntaxes.

And now, without the window’s object. 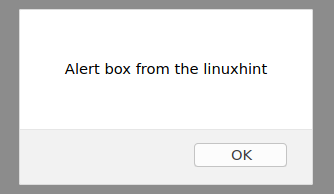 You will witness that there is no difference in both of them.

The alert method doesn’t only take the string to show the message. We can provide variable as well, and it worked perfectly fine,

as you can see in the screenshot below that the message is displayed. 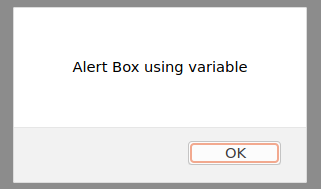 We have learned about providing a variable as well. What if we want to show the pop-up alert box on the screen at the click of a button? For example, we have got some information from the user, and after successfully saving the user’s data on the server, we want to show a confirmation message that says “Added successfully”. So, we can simply show an alert box like this.

Or, if we are getting a confirmation message from the server, and we want to show the message on the base of the message we got. We can call the function on the button’s onclick method

Then, later in the script, we can write the function in which we can show the alert message.

So, these are some of the different methods of using the alert() method.

In this article, we have learned about the javascript’s built-in alert method to show pop-up over the browser’s window. This article has explained the use of the alert method in a very easy, profound, and effective way that any beginner can understand and use. So, keep on learning, working, and getting experience in javascript with linuxhint.com to have a better grasp over it. Thank you so much!