After the arrival of the ES6 version of JavaScript, there are still a lot of features that are rather confusing to the masses. JavaScript is widely known to have a solution to every problem, and implementation of most (if not all) concepts. One of such concepts is the concept of Closures

The concept of closures has been around for quite some time now, but people have difficulty understanding it. We are going to go over step by step and make it really easy to understand with the help of examples.

What are Closures in JavaScript

Very briefly, Closure is having access to the outer scope from the inner scope when working with nested functions. A closure is created every time a nested function is executed in JavaScript. The variables defined inside the function are created on function execution and are removed from the memory upon the complete execution of the respective function.

To understand the concept of Closures in JavaScript we need to know the difference between the global scope and the local scope. Well, we are going to go over these really briefly.

As mentioned above, there are two major variable scopes in JavaScript:

The variables defined outside of any function are known as global variables and have a global scope. These variables can be accessed from anywhere inside the program, that is why we use the term “global”.

Comparatively, the variables defined inside a function are known as local variables and are known to have a local scope. Local scope is further divided into function scope and block scope but that is not a major concern for us. Local variables can only be accessed from within the function in which they are declared

Take this block of code to understand the scope:

How does a Closure work in JavaScript

Now that we know how scoping works in JavaScript, we can easily understand the working of closures.

This is how this code works: 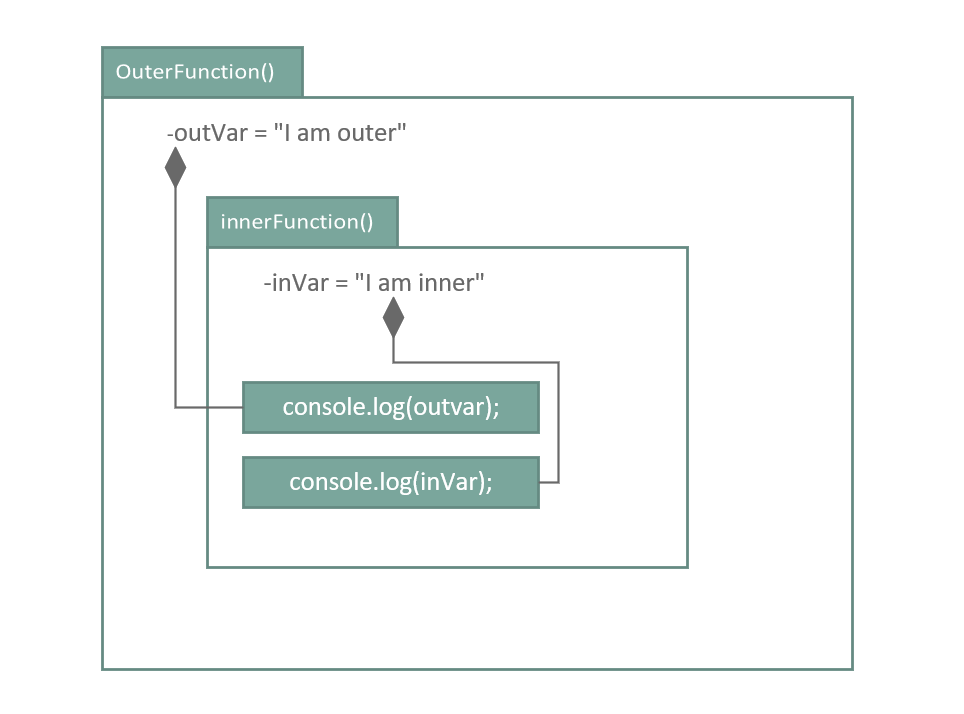 The output of the above code is:

We were able to get the values of both the variables and print them out to the console using the console.log() function.

How to have multiple functions inside another function in a Closure

Note: Parameters and arguments are also accessible to children.

The last child, calls all of its siblings and prints the values on the console, which is implemented with the following lines:

At the end of the parent function greeter() it returns the namePrinter() child to the place where it is called.

To, execute this whole Closure we need to call the parent function with the following line:

The complete code snippet of this closure is:

We will get the following output:

The closure is a feature that came with the ES6 release of JavaScript. Closures are the implementation of the concept based on the scoping of variables in JavaScript. We learned what closures are and since they are based on scoping of variables we learned about scoping as well. We went through the difference between global scope and variable scope in Js, and in the end, we tested out the working of closures with the help of examples.