The add() method from the set interface is used to add the new elements to the set. The add() method only includes the specified element if they are not found in the given set. If the elements are present in the set, it returns false. 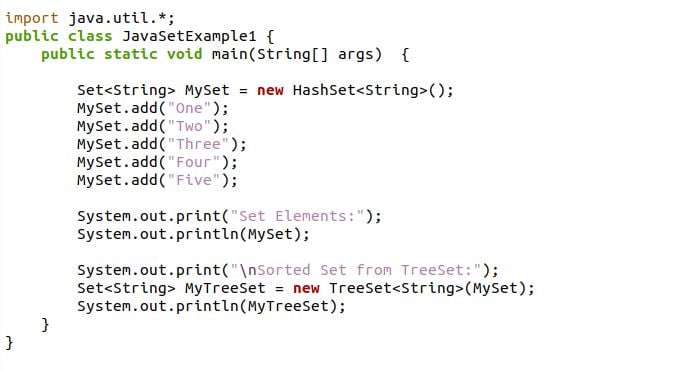 The “JavaSetExample1” class is created where the main() method is present. In this class’s main() method, we declare the “MySet” object of string type. And a set interface as HashSet is implemented there.

The elements are added in the following set using the add() method. Furthermore, the set of elements is also sorted in the form of TreeSet.

The contains() method from the set interface of Java is used to determine the presence of the particular element which is added to the set. A Boolean result of true is produced when the specific members in a specified set are included; a Boolean result of false is received when they are not. 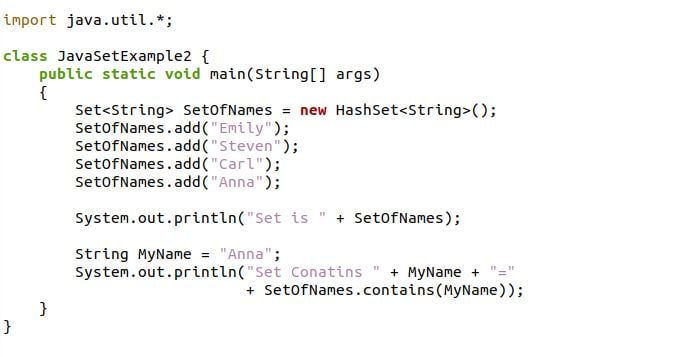 The output screen first shows the set which is the collection of specified names. Then, the true Boolean result is displayed since the string name is already present in the set. 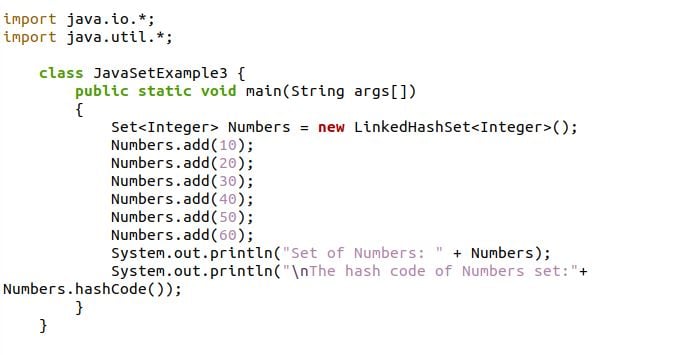 The Java class “JavaSetExample3” is implemented with the main() method. Here, we create the “Numbers” object and define the set interface using the HashSet class for integers. The set of numbers is expanded using the add() method. Then, these numerical values are printed which forms the set. We also print the hash codes of the “Numbers” set by employing the hashCode() method.

The set is displayed on the screen which contains all the numerical values. The hash code value of the set is also shown on the screen. 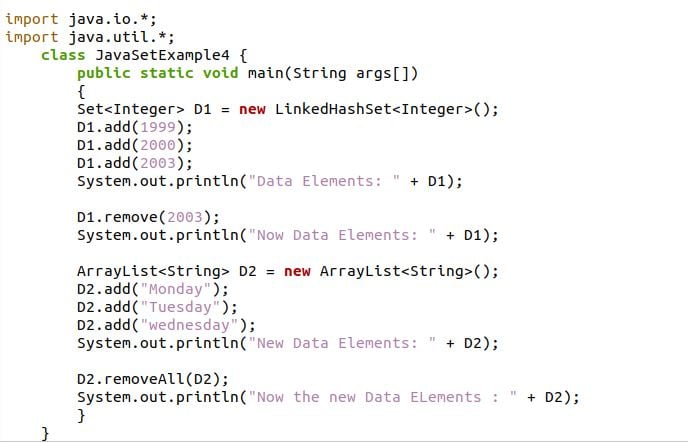 The Java class “JavaSetExample4” is established where the main() method is deployed. We declare the “D1” object where the set interface of a “LinkedHashSet” class is defined. Then, we add the integer data to the set and display it. From the given collection of data inside the set, we remove the integer data “2003”. This element can be eliminated from the collection’s specified set using the remove() method.

Next, we define again the set interface for strings in the “D2” object. The set interface is created from the ArrayList class. We insert three strings in the set with the add() method. The set of strings are displayed on the terminal. After that, we call the removeAll() method which takes the input “D2” object as a parameter. The removeAll() removes all the data inside the string set. We print the set after removing all the elements at once.

Mathematical operations like union, intersection, and difference can also be performed on the set. The addAll() method, retainAll() method, and removeAll() method, in that order, carry out the operations. 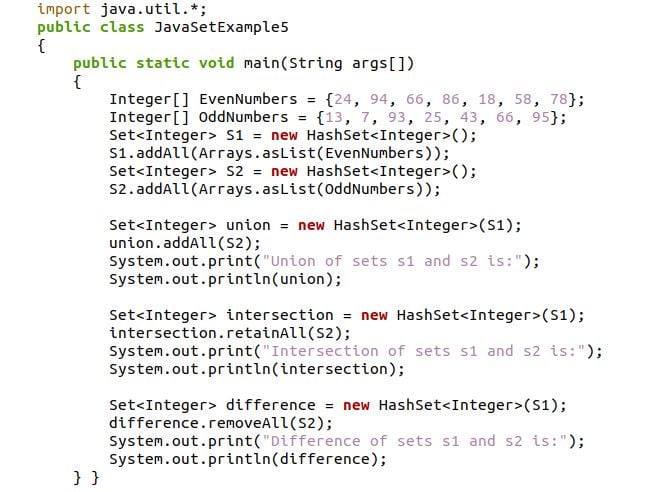 The “JavaSetExample5” class is declared with the main() method where the mathematical operation is performed on the sets. First, we generate two integer arrays – “EvenNumber” and “OddNumber”. Then, we establish the HashSet class interfaces by declaring the “s1” and “s2” objects. Each element in the arrays “EvenNumber” and “OddNumber” in the sets is added using the addAll() method. After that, we carry out the union operation. We define the “union” object where the set is implemented and added all the elements of “s1” set.

On the following screen, the outcomes of the set are shown:

Java does not allow for the direct instantiation of “java.util.set” because it is merely an interface. Consequently, users must generate a Java class that implements the Set interface. We discussed the Java set along with its few methods. All the methods provided by Java sets play the very important functionalities. Moreover, the last example shows the mathematical operation on the set.