The creation of the predicate interface of Java is demonstrated in the following example. Java Predicates has an abstract method called test(Object) that assesses the predicate on an object as input.

We have first defined a predicate interface with the keyword “predicate” that takes the “integer” type as a single argument. Then, we created the object “p” and specified the predicate condition, which will verify that the given value meets with the predicate and returns the Boolean type. Next, within the predicate “test()” method, the integer value is assigned to evaluate the predicate on this value.

The aforementioned program explains the creation of predicate in Java. Now, the simple chain of the predicate is implemented in the following example program that filters numbers using the “greater than” and “less than” comparison operators: 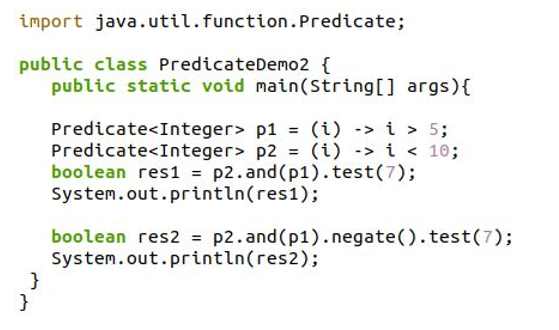 We have created the chain of the predicate interface by declaring its objects “p1” and “p2”. The “p1” is given a predicate that will evaluate for greater than the operator. The “p2” object is assigned a less-than-operator sign to evaluate. After that, we have defined an object “res1” where the value is specified inside the test() method to generate the Boolean result after evaluating with both specified predicates. Java’s print operation will print the Boolean-value results.

Java predicate interface is also provided with different methods. The predicate isEqual() method is utilized here, which checks whether the two objects are equivalent to a value specified as an argument and returns the predicate according to the condition.

Note that the result of the previous program is the “false” predicate because the predicate method is case-sensitive.

There is another Predicate interface method called the predicate.or(). The predicate.or() method works similarly to the “OR” operator. This will return true even if one or two predicate values are true and the other is false.

The following predicate output is obtained from the predicate.or() operation:

We have created the List object “MyList” and set the list of arrays that contain random integer values. After that, we called the predicate stream() method for getting the stream element from the array, which is greater than a predicate value. The predicate is passed as an input in the filter() method. The stream of filtered elements will be collected, and the toList() method transforms these elements into the list format, which will be printed out on the screen.

The stream of integer values is obtained as an output from the predicate filter() method.

Now, the predicate negate() method is used to collect all values that don’t fulfill the predetermined criteria. 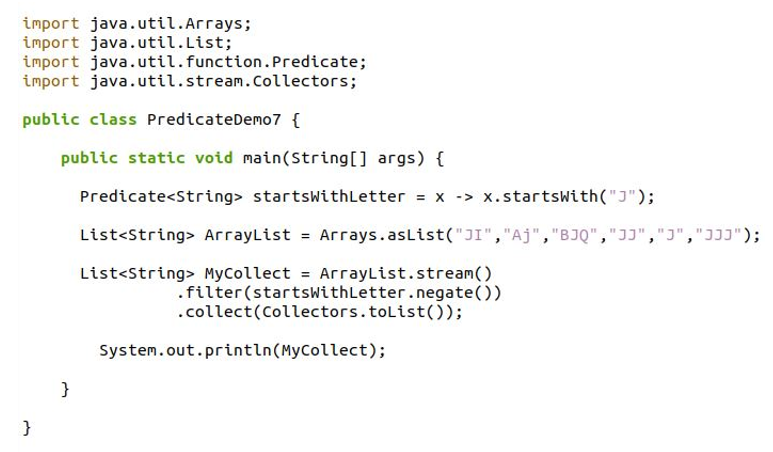 We have created a predicate variable “startsWithLetter” and provided the predicate where the startsWith() is being called. This method will not return the element that starts with the letter “J”. Then, we established a list of upper-case characters. Then, we invoked the predicate negate() method, which collects the characters that don’t start with the letter “J” and generates the stream of remaining characters in the form of a list.

The output list shows those values started with another character except the character “J”.

Java predicate interface is a crucial component of software testing. Developers mainly use predicates interfaces for any activity which involves analyzing objects by predetermined standards. We have used different predicate interface methods and showcased how these methods performed in Java. These methods include the default logical method and some other predicate functional method.