A java package is nothing but a procedure of grouping different classes, interfaces, enumerations, etc. The primary purpose of grouping different classes, interfaces, etc. under a package is to manage the space and to avoid naming conflicts. We can understand the concept of java packages by means of folders in windows where a single folder can hold multiple files. In java, packages are either predefined or user-defined.

This write-up will provide a profound understanding of the following concepts regarding Java packages:

In order to import a single class of a specific package, we have to utilize the following syntax:

Following will be the basic syntax to import the entire package:

For the profound understanding of concepts consider the below-given examples:

Let’s consider we want to take input from the user and to do so we need to import the scanner class of java.util package:

The above line of code represents that Scanner is a class that belongs to java.util package.

The above snippet shows that import the ArrayList class that exists in java.util package.

Let’s consider we have to utilize multiple classes of a specific package then instead of importing every single class individually, we can import the entire package in one go as shown below:

The above code snippet elaborates that import every single class of java.util packge.

Similarly, we can import any built-in class or the entire package.

Let’s consider the below-given code snippet for the profound understanding of how to import and utilize the built-in packages in java:

The complete code and its descriptive screenshot are provided below: 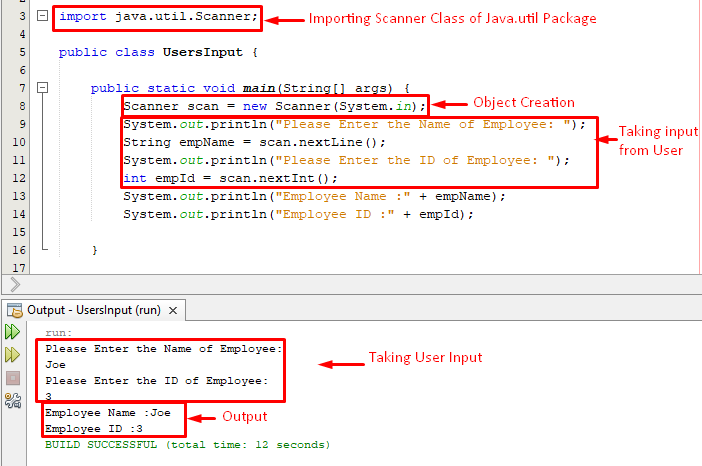 The above snippet verifies that the built-in class is imported successfully as it takes the input from the user successfully.

Java allow us to create our own packages and to do so we need to follow the following steps:

In the very first line of our source file we will utilize the package keyword:

Once the package is created then we can create any number of classes as we want:

Next we will declare and define the class under the package:

In the above snippet public is access specifier which indicates that this class is accessible to all other classes of the package.

If you are not utilizing any IDE then you have to follow the below-given syntax to compile a java package:

Here, in the above snippet -d is nothing but a keyword that represents the destination for the file to be saved. In the above snippet, we utilized a “.” which indicates that save the package in the same directory however, you can specify the directory name of your choice.

In order to run the java package all you need to do is specify the full name:

In this way we can create and utilize the user-defined java packages and classes within packages.

Let’s consider the below example to understand the working of user-defined packages in java.

The below snippet creates a package named users and creates a class within the package.

The complete code and respective output is shown in the below-given snippet:

The output verifies the working of the user-defined package. We can create multiple classes under the same package or we can import the different classes from other packages using the import keyword.

There are two types of packages in java i.e. built-in or user-defined both have the same goal of grouping the related classes under one package. Java packages assist us in managing the space, avoiding naming conflicts, and providing more access control. In java, we can import the build-in packages and create the user-defined packages using import and package keywords respectively. This write-up step by step guide for java packages.