The isdigit() function is used in C and C++ programming languages. The purpose of this function is to check if the character that passes through it is a digit or is any other character. It always returns a value that is non-zero if the character is a digit; otherwise, it returns 0. Such situations mainly occur in programming while creating a source code when we need to separate numeric and alphabetic values from the string. Then we prefer to use this feature along with the character array of having other operators in the form of characters. This article will contain some elementary examples related to isdigit().

The syntax of the isdigit() function is:

It takes only a single character that is ‘ch’; this character is checked. First of all, it is preferred to use a direct integer, but if the user adds a character instead of an integer, it is cast to an integer type and then checked through the isdigit() function.

The isdigit method does not work properly for decimal or float numbers. Because for them, it returns false.

The isdigit() function returns the value:

Difference between isdigit() , numeric() and decimal()

We will verify if the character used is a digit or not. This is a simple usage of this built-in function. This will act as a Boolean here. If the digit is found, it will return 1, and in the second case, 0 will be returned. Simply we will pass a digit ‘5’ as a parameter to the function

Execute the source code by utilizing the G++ compiler. This compiler is used to execute C++ programs in the Ubuntu operating system.

The resultant value is displayed.

This example contains a character that is assigned by a number. Then we use an if-else statement to check if the used character is a digit or not. If it is a digit, a message will be displayed. And if it is not, then again, the system displays that the value is not numeric. 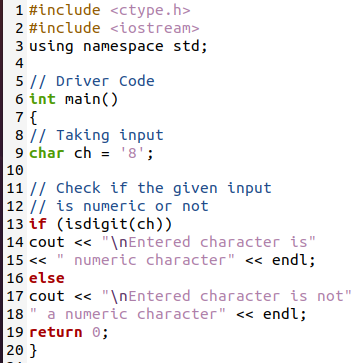 Now we will compile the code and execute it as we have used a numeric value to see that the message will be displayed that the character is numeric.

This example involves the usage of a string having mixed characters, both alphabets and numbers as well. For string input, we have used the library of the string to use all the built-in functions of strings.

In the main program, initialize the string. Here we have taken an alphabet to assure the presence of digits. As it is a whole string so to tackle this, we have used a FOR loop to check each element on each index of the character array. The function of string strlen(str) is used for the length of the string. 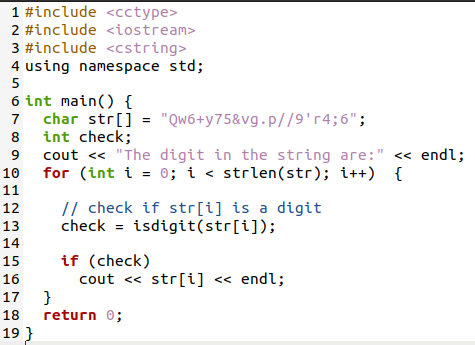 The strings we have used contain random characters having operators as well. So on execution, you will only get the digital numeric values. 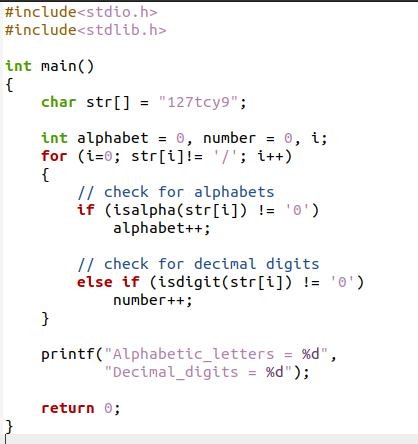 You can see that the string contains 3 alphabets and 4 digits.

This example has user interaction. The entered value will be checked by the system whether it is a digit or not. Then the message is displayed by the program. 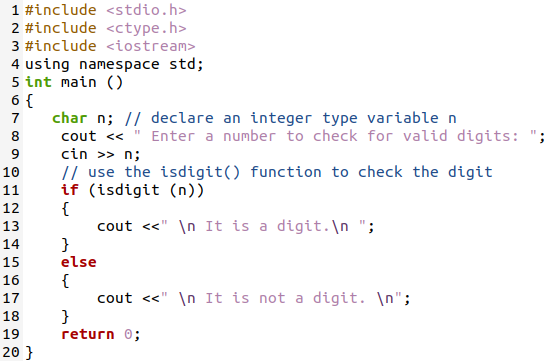 Execute the source code. First, we will enter a digit on displaying the message. The system will check according to the program. Hence a message of the digit is obtained.

Now we will use an alphabet string to check the results. So the resultant value shows that the entered value is not a digit.

‘isdigit C++’ is a function used to check if the string or a character it takes as a parameter is a digit or contains one or more digits in it or not. This is a simple function used in the C++ programming language. Some basic features are discussed here that refer to its usage and working. We have implemented some Ubuntu system examples that show the resultant values according to the isdigit function.