One technology that has seen significant leaps in quality in recent years are USBs. Connector systems, as well as protocols that come along with these systems, are responsible for the transmission of data and power to and from connecting devices.

This article covers the USB C and Thunderbolt 3 connector system types in detail, including a comparison of these two USB types.

What Are USB C and Thunderbolt 3?

USB C is an industry-standard connector system that allows you to charge your devices, as well as transfer data from one device to another. This connection type was developed by the USB Implementers Forum (UIF), an organization that has been at the forefront of the creation and promotion of USBs. In contrast to its predecessors, appearance-wise, the USB C is oval in shape and has a connector that is quite similar to that of a micro-USB connector. USB C not only offers better transfer speeds but also more increased power, as well as more pins than previous versions.

Thunderbolt 3 is a data transfer protocol that was developed by Intel in collaboration with Apple. The previous versions of the Thunderbolt USB made use of the Mini Display Port (MDP) for the connector. However, Intel changed this in the Thunderbolt 3 cable and introduced the same design as that of the USB C connector. This transition was made because the only manufacturer that used Thunderbolt before was Apple. The Mini Display Port had also been replaced by USB C in almost all newer laptops, so Intel decided to support the USB C connector, as well. This is the reason why Thunderbolt 3 connectors bear a significant resemblance to USB C. 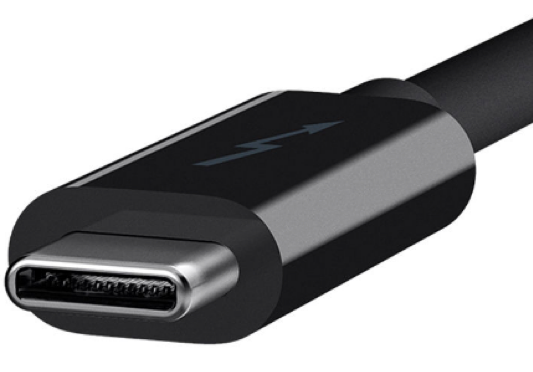 Differences between USB C and Thunderbolt 3

Now that we have looked at detailed descriptions of the USB C and Thunderbolt 3 connection types, we will cover some of the differences between these connection types, despite a striking resemblance in appearance.

In terms of data transfer speeds, Thunderbolt 3 edges out USB C. Thunderbolt 3 supports up to 40 Gpbs of transfer rates, while USB C works at 10 Gpbs of speed. Thus, Thunderbolt 3 is four times faster than USB C, provided that your system can support these speeds. Another excellent feature that comes with Thunderbolt 3 is its ability to support two high-quality displays, particularly in the 4K range. USB C contains the feature called Alt Mode that allows this connection type to perform this function; however, this is an optional feature that must be enabled and will only work if it is supported by your computer system.

Both USB C and Thunderbolt 3 can be used to connect to a variety of devices, such as printers, laptops, smartphones, and more. Even so, the Thunderbolt 3 again takes the edge over USB C because it offers support to PCIe devices. PCIe is an interface that allows you to connect to components such as graphics, memory devices, Wi-Fi and RAID cards, and so on. This means that Thunderbolt 3 users can connect GPUs and external graphics cards, which gives your computer an additional boost.

Thunderbolt 3 is more compatible with USB C. Thunderbolt 3 allows USB C devices to be plugged into its own ports by using its alternative option, where it switches to the USB protocol and will now be able to support USB C. This, however, is not the case with USB C ports, which do not work with Thunderbolt 3 devices.

So, Thunderbolt 3 or USB C?

The decision over which port type to use – Thunderbolt 3 or USB C – comes down to your personal usage preferences and needs. It is important to note neither of these connection types is the winner; your choice depends on what you want. USB C is exceptionally fast and powerful, and this connection type allows you to transfer HD movies in seconds. If there is no need for connecting GPUs or two high-resolution displays, then USB C will meet the needs of most users, and it is more cost-effective than its counterpart.