Object-Oriented Programming (OOP), is a programming approach that is used by every developer at some point in their life to organize software design around objects or data rather than logic or functions where an object is an entity that has some properties and some type. The benefits of using the OOP technique include modularity, reusability, security, productivity, flexibility, and is easily scalable and upgradeable.

The three major features of OOP are as follows:

Encapsulation is a concept of OOP that bundles data and methods which operate on that data within one unit, for example, a class in java and an instance of a class is called an object. Encapsulation also refers to restricting data access to some classes or objects and hence all the users won’t be able to access variables or state values of some object.

In Inheritance one class (child) inherits all the methods and attributes of another (parent) class.

Polymorphism means a property having many forms and is one of the core concepts in OOP. Polymorphism lets us create procedures about objects whose exact type is not known till runtime.

JavaScript is excellent in programming OOP applications and is heavily object-based however it is not a class-based OOP language but rather a Prototype-based programming language. However, we can use JavaScript as a class-based programming language. JavaScript allows you to make or create new objects for the use of your application. However, it should be noted that while OOP language encourages and focuses on relationships and taxonomy, prototype-based languages focus and encourage behavior first and then classification later.

In 2015 JavaScript introduced a class keyword which was to make JavaScript OOP language but it was just synthetic sugar over the existing prototype technique. The outer body looks like OOP, however in the background the prototyping continues.

Below is an example of OOP in JavaScript where we used class for defining student objects and has the property of name and grade and method studies() which returns name and grade of the student. 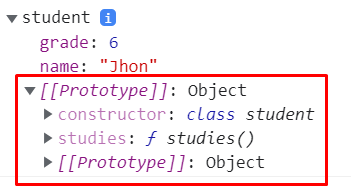 Let us look at an example where inheritance is used and the person class or object is defined where a person has a name and a method is also defined where the name is returned. Another class student is defined which extends person hence inheriting all the properties and methods of parent class i-e person and in the child class i-e student class, we utilized the super keyword that invokes the constructor of the parent or person class. You will also be able to see that the person object and student object both have a method with the same name toString(). This is called overriding and OOP allows us to have a method in a child class with the same name and signature as that of the parent class.

OOP is a programming model that organizes our software design around objects rather than logic or functions.  An object has some property and value. By using OOP we achieve security, productivity, reusability, and much more.