Iptables is a command-line firewall that filters packets according to the defined rules. With Iptables, users can accept, refuse, or onward connections; it is incredibly versatile and widely used despite being replaced by nftables.

After reading this tutorial, you will understand Iptables policies and define Iptables rules to protect your home network.

Note: sudo command was added for readers who need to copy-paste the rules mentioned in this iptables tutorial.

TARGET: When using iptables, a target is an action you want Iptables to apply when a packet matches a rule.

CHAIN: A chain is a list of rules; available built-in chains are: INPUT, OUTPUT, FORWARD, PREROUTING, and POSTROUTING.

TABLE: Tables are iptables features for each purpose. For example, there is a table for routing tasks and another table for filtering tasks; each table contains rule chains.

To install Iptables on Debian and its based Linux distributions run: 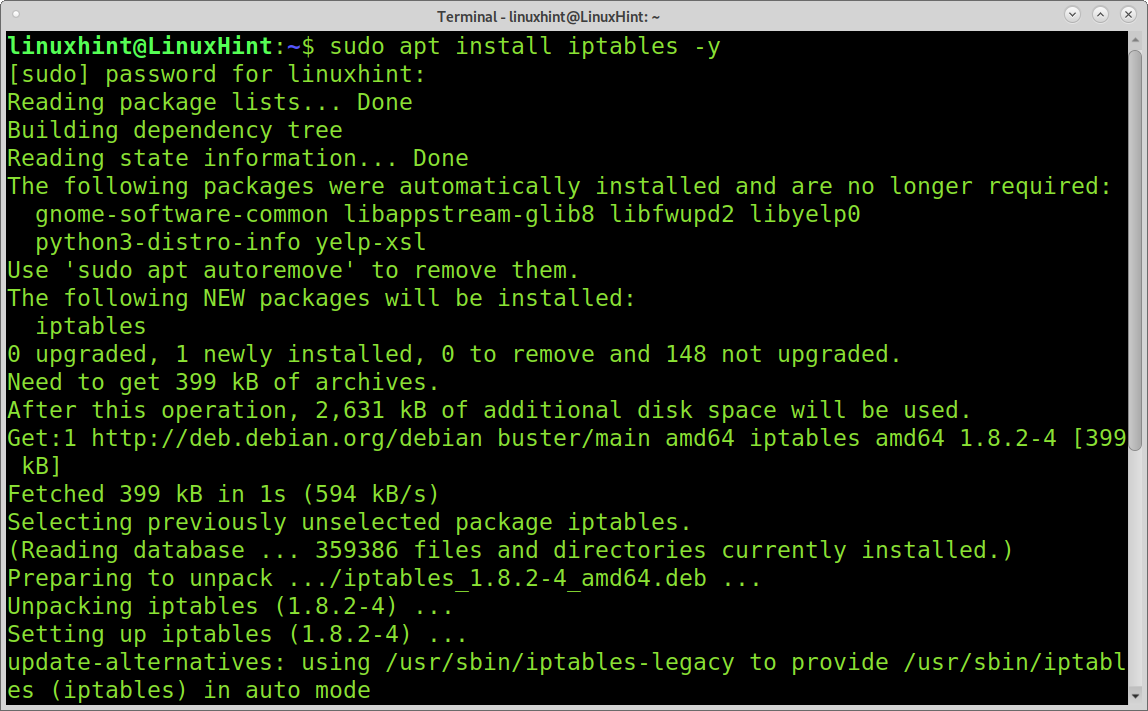 Before installing Iptables on RedHat based Linux distributions, you need to disable Firewalld by running:

Then install Iptables by executing:

Getting started with Iptables:

Before starting, check for previous rules by instructing iptables to list existing policies and rules using the -L (–list) parameter.

The output also shows there are no defined rules, and all defined policies are accepted.

There are 3 types of policies: ACCEPT, REJECT and DROP.

The policy ACCEPT allows connections; the policy REJECT refuses connections returning an error; the policy DROP refuses connections without producing errors.
When using DROP, UDP packets are dropped, and the behavior will be the same as connecting to a port with no service. TCP packets will return an ACK/RST, which is the same response that an open port with no service on it will respond with. When using REJECT, an ICMP packet returns destination-unreachable to the source host.

When you deal with Iptables, you need first to define the three policies for each chain; after that, you can add exceptions and specifications. Adding policies looks like this:

You can apply Iptables with a permissive policy by accepting all incoming connections except for these you specifically drop or reject. In this case, every connection is allowed unless you define a rule to refuse it specifically.

On the contrary, restrictive policies refuse all connections except for these you specifically accept. In this case, every connection is refused unless you define a rule to accept it.

The following example shows how to apply a restrictive policy with Iptables by dropping all incoming traffic except for the allowed.

IMPORTANT: applying the following 3 rules may leave you without an internet connection. Using the rules mentioned in “Iptables Appending rules and Iptables states,” you add the necessary exceptions to restore your access to the internet. You can consistently execute sudo iptables -F to flush rules.

You can block all incoming traffic, allowing only outgoing traffic to browse the web and for applications you need.

sudo iptables -P FORWARD DROP: instructs iptables not to execute routing tasks dropping all packets destined to a different host (trying to pass through the firewalled device) without reply.

The example above allows browsing the web and connections started by the local device (-P OUTPUT ACCEPT) but will prevent connections initiated by another host (-P INPUT DROP) like ssh attempts to access your device not return error messages.

When you enable Iptables with a restrictive policy like in the previous example, you need to append rules to adjust your configuration. For example, if you keep the configuration mentioned above without adding a reasonable exception for the loopback (lo) interface, some applications may not work correctly. You will also need to allow incoming traffic belonging to or related to a connection started by your device.

It is essential to understand that Iptables applies rules by order. When you define a rule after a previous rule, the second rule will rewrite the last if a packet matches the same rule.

I like the previous example; you blocked all incoming traffic, you need to append exceptions for the loopback interface; this can be achieved by adding the -A (Append) parameter.

The module  (-m) conntrack –ctstate ESTABLISHED,RELATED instructs Iptables to confirm if the connection state is ESTABLISHED or RELATED to an existing connection before applying the defined rule policy.

There are 4 possible states Iptables can check:

Iptables state NEW: The packet or traffic you allow or block tries to start a new connection.

Iptables state ESTABLISHED: The packet or traffic you allow or block is part of an established connection.

Iptables state  RELATED: The packet or traffic starts a new connection but is related to an existing connection.

Iptables state INVALID: The packet or traffic is unknown without the state.

The loopback interface is used by programs that need to interact with the localhost. If you don’t allow loopback traffic, some applications may not work.

You can also define a permissive policy allowing all traffic except for the specified dropped or rejected. You can enable everything except a specific IP or IP range, or you can refuse packets based on their headers, among more possibilities.

The following example shows how to apply a permissive policy allowing all traffic except for an IP range blocked for the ssh service.

Where -p specifies the protocol, –dport (or  –destination-port) the destination port (22,ssh), and the module iprange with the argument –src-range (source range) allows defining the IP range. The option -j (–jump) instructs iptables what to do with the packet; in this case, we represent REJECT.

The following example shows how to block a specific port for all connections, the ssh port.

Iptables rules are not persistent; after rebooting, the rules will not be restored. To make your rules persistent, run the following commands where the first line saves the rules in the file /etc/iptables.up.rules, and the second line is to create the file for iptables to start after reboot.

Add the following to the file and close saving changes (CTRL+X).

Finally, give the file execution permissions by running:

You can remove all your Iptables rules by running the following command:

To remove a specific chain like INPUT, you can  run:

Iptables are among the most sophisticated and flexible firewalls in the market. Despite being replaced, it remains as one of the most spread defensive and routing software.

Its implementation can be quickly learned by new Linux users with basic knowledge of TCP/IP. Once users understand the syntax, defining rules becomes an easy task.

There are a lot more additional modules and options that weren’t covered by this introductive tutorial. You can see more iptables examples at Iptables for beginners.