With technology developing at such a rapid rate, it is not surprising to see a spike in demand for programmers, which continues to grow with each passing year. This increasing popularity has led to the discovery and development of many programming tools, such as text editors, which provide a comfortable environment to programmers and help in fulfilling their basic programming requirements.

Text editors are programs that allow users to create and edit their files. A simple example would be writing an essay or some code for developing a program. The biggest advantage of text editors is that they are extremely lightweight and, as a result, eat up less memory resource than other editing tools making them much nimbler and faster to use.

Text editors adapt to a broader perspective by allowing users to create and edit files of all types of programming languages, making them extremely flexible to use. Text editors are the lifeblood of many programmers, and it is imperative to choose the one that offers features that most closely match with your individual requirements. This allows you to do your work most efficiently.

Among the wide variety of text editors out there, Emacs is one of the most popular, known for its dynamism and large set of features. This article will discuss some of the features Emacs and what makes it such a great text editor.

Emacs is one of the oldest Linux text editors available, but is famous for its dynamism and powerful editing utilities. Before Emacs, text editors were extremely basic, and could only be used to show and generate words or lines from a file. Documents that were quite large and contained lots of data were hard to handle and took a lot of time to edit. It was around this time that Emacs came into the picture and completely changed the text editing world.

As an open source, cross platform program, it is no wonder that Emacs has garnered such huge popularity in the programming community. Emacs comes off as a hybrid between vi and nano, embracing the strengths of both text editors. However, unlike these two, Emacs also offers a Graphical Interface (GUI) version, which provides a very user-friendly interface to users that is highly customizable. Emacs contains a very in-depth documentation to back it up, and provides a Tutorial that allows users to experience the UI and learn some of its commands.

Now, we will look at some of the features of Emacs that make it so unique.

You may hear Emacs compared to an operating system, and with good reason. Emacs can be set up as a shell, an integrated development environment, a client for checking email, and even more. It is the complexity of Emacs that appeals to many users. Emacs has a Lisp interpreter at its core, which means it acts as a testing environment for Lisp and has a whole new language added to its functionality. This gives rise to the extensibility feature of Emacs; that is, users can customize and change the behavior of existing features.

Emacs is known for its customizations, as everything inside of it can be changed and molded into a form suitable to your taste. Modes, fonts, keymaps; almost everything can be customized. Emacs even has a Tetris game built in. This is a fine indicator of how extremely flexible Emacs is and, in turn, explains why integration with external tools is possible in this text editor.

For example, if you wish to open a terminal in Emacs, simply click on Alt + X on your keyboard and enter the command: shell.

Now, you will have the terminal opened in front of you.

Being around for quite some time, Emacs has established a large community that regularly collaborates to develop and improve this program. This has led to the integration of a large collection of plugins into Emacs that offer numerous efficient features akin to those found in IDEs.

Emacs is considered a somewhat modern IDE, as it provides users with features similar to those that can be found in other IDEs. These can be as simple as syntax highlighting or integration with version control systems.

Taking the latter as an example, say, if someone is interested in setting up their files and editing them in version control, Emacs easily allows you to do so via plugins.

This includes commands that come along with Git, one of the Version Control systems supported by Emacs. 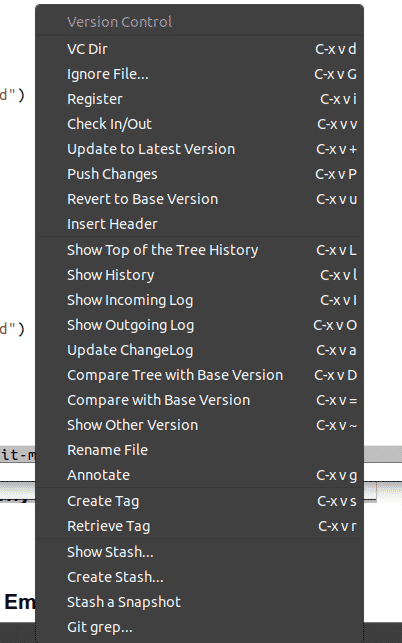 Emacs also provides users with high-level, built-in commands that allow users to perform multiple tasks, like moving cursors or manipulating text. For example, Emacs lets users move around in buffers, which makes them move around the screen much faster than using the mousepad. In addition, Emacs also allows users to perform complicated searches, like incremental search, or regular expression search. The latter can easily be done by entering the buttons Ctrl + Alt + S.

Emacs is a highly powerful text editor that offers some of the best features to its users, along with a great deal of flexibility and extensibility. Furthermore, Emacs provides a ton of freedom to users and does not impose too many restrictions. The customizable and extensible nature of Emacs allows users to meld this text editor according to their personal taste in an out-of-the-box experience.